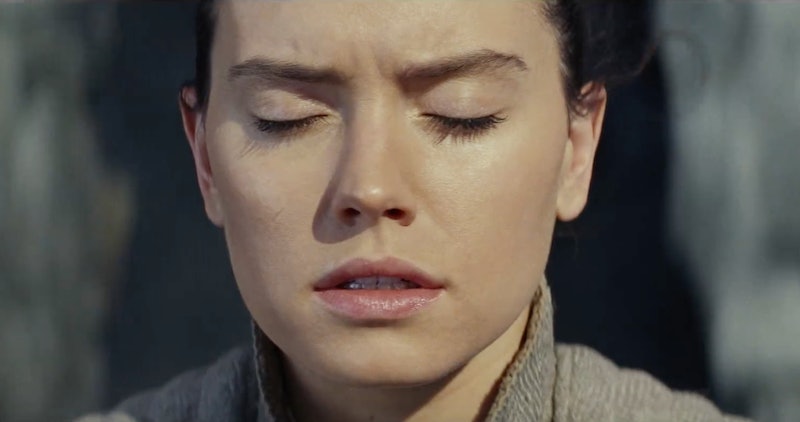 Much to the delight of most of the internet, the Star Wars: The Last Jedi full trailer is out, and things look like they're getting darker than ever before — or perhaps just as dark as they once were. That's because the trailer harks back to both Revenge of the Sith and The Empire Strikes Back, because the clues that Rey is joining the dark side are impossible to ignore.

Her Jedi trainer, Luke Skywalker, even says, "I've seen this raw strength only once before. It didn't scare me enough then, it does now." Later he adds, "This is not going to go the way you think," but it's unclear who he's talking to. The question is, is Luke saying that it won't go the way Rey thinks, or the way the audiences thinks? Because it certainly looks like it could be another Kylo Ren situation, since Luke had trained Kylo to be a Jedi, with which audiences are all too familiar.

Luke isn't the only character who hints that history might repeat itself with The Last Jedi. In the new trailer, Rey says there is "something inside me has always been there," which sounds a little too much like Anakin's moody monologues when he was battling the dark forces. Hopefully, The Last Jedi won't go in the way of the wildly unpopular Revenge of the Sith, and, if Rey does join Kylo Ren's forces in the upcoming film, she won't become as unlikeable as Hayden Christensen's character was.

Speaking of Kylo Ren, he appears more determined than ever to completely escape his past, which includes his inclination towards the light side of The Force. Spoilers ahead: In The Force Awakens, Kylo kills his father, Han Solo, after the latter calls him by his real name, Ben. And it looks like a similar fate might lie ahead for his mother, Princess Leia, based on The Last Jedi trailer. It's troubling, then, that Rey appears to go to Kylo for help, as towars the end of the trailer, she says, "I need someone to show me my place in all this," and Kylo appears to respond by reaching out his hand. It could just be good editing, or it could be a sign that we should either be worried about Rey's fall or hopeful about Kylo's redemption.

The connection between Kylo and Rey seems incredibly ominous, but perhaps the most sinister aspect of the trailer comes from Supreme Leader Snoke. Snoke's voice is heard at the opening of the Last Jedi trailer, saying, "When I found you I saw raw untamed power, and beyond that, something truly special." While Snoke says the first part of this statement, it seems he's speaking to Kylo Ren, which would make sense. But right after Snoke finishes speaking, the trailer shows Rey holding a light saber, and suddenly it's not so clear if Snoke was praising Kylo or Rey. It's also interesting that both Snoke and Luke use the words "raw," because they're likely talking about the same person, and, based on the trailer, it's likely Rey.

Supreme Leader Snoke also makes a physical appearance in the trailer, as he shows up later in another foreboding scene with Rey. While he uses the Force to battle her, he says, "Fulfill your destiny." Considering that Snoke used the Force to convince Kylo Ren to join the dark side, the chances that Rey will be able to resist the same fate seems unlikely. However, like Luke Skywalker says, Rey has an uncanny strength about her and it could help her defy the dark destiny which Snoke suggests belongs to her.

It wouldn't be the greatest shock if Rey ended up joining the dark side, as it's frequently been alluded that she has those inclinations within her. In the Episode Seven, when Rey holds a lightsaber for the first time, all of the visions she sees are extremely dark, and one even shows Kylo Ren. Perhaps it has been her fate all along to join the dark side. Whether or not Rey grabs Kylo's outstretched hand or chops it off — either action would be a familiar Star Wars occurrence — will be revealed at the exciting movie's release.

More like this
You Definitely Know The Voice Of Shuri's AI In 'Black Panther: Wakanda Forever'
By Brad Witter
This James Bond Event At Abbey Road Studios Was A 007 Fan's Dream
By Samantha Rollins
The 'Love Actually' Reunion Is Missing A Major Player
By Bustle UK
Meghan Markle Wishes Learning Royal Protocol Was Like 'The Princess Diaries'
By Jake Viswanath
Get Even More From Bustle — Sign Up For The Newsletter