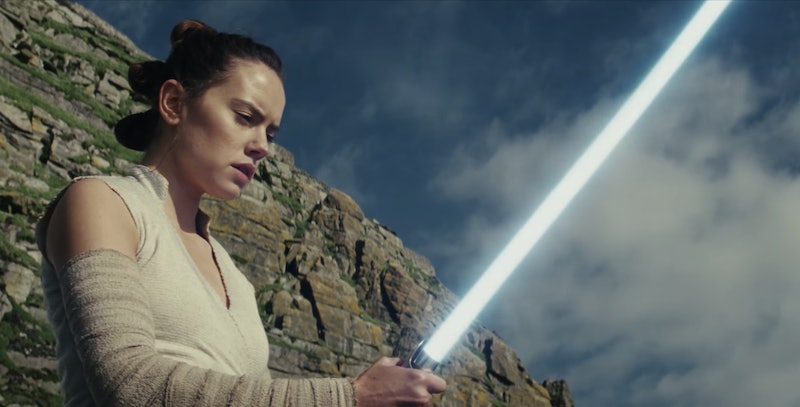 The Galaxy may be in big trouble, but at least you can rejoice temporarily, because the full Star Wars: The Last Jedi trailer is officially here. And it's everything you were hoping for. There's more of everything this time around, including Luke and Rey's training sessions. Why the former savior of the Galaxy wants the Jedi to end remains a mystery for now, but all will be revealed when the film hits theaters on Dec. 15. In the meantime, fans are busy obsessing over every detail of the trailer.

In case you need another reason to get excited, you can buy tickets to see Star Wars: The Last Jedi right now. The sale began just before the trailer arrived during Monday night's football game, so if you want an opening night seat, you better move fast. After watching the epic teases of what's to come for Rey, Finn, Luke, and the rest of the characters, you can bet everyone will want to see Episode VIII immediately.

The excitement surrounding Star Wars: The Last Jedi is tempered with a dash of sadness as well. The film marks the late Carrie Fisher's final performance as General Leia. Her presence is felt throughout the trailer, which only adds to the feeling that The Last Jedi will honor Leia's legacy in a special way. Seeing Leia in action is bittersweet, but knowing she has an important role to play in this chapter of the story should be a comfort to Fisher's legion of fans.

In addition to Fisher, The Last Jedi will also star Daisy Ridley, John Boyega, Mark Hamill, Adam Driver, Oscar Isaac, Lupita Nyong'o, Andy Serkis, Laura Dern, Benicio Del Toro, and Gwendoline Christie. Plus, Kelly Marie Tran is joining the cast as Rose Tico, a mechanic in the resistance, who will almost certainly be your new favorite character. The character was introduced at the Star Wars Celebration in April, and was described by director Rian Johnson as the most significant new character in the franchise's eighth chapter. However, Rose wasn't spotted in the new trailer, and fans are understandably a little bummed about that.

Aside from that, the reaction on Twitter has been overall positive, as fans pore over every single scene.

Honestly, how could they not?

People Tried To Piece It Together

There's plenty to ponder between now and December.

The Heartbreak Is Real

Fisher's legacy will undeniably live on, but that doesn't mean her scenes will be any easier to watch.

You'll want to pack tissues, for sure.

Did you expect anything less?

Can it just be December already?

Seriously, They Couldn't Handle It

Those reactions speak for themselves.

One Word Says It All

So Close, Yet So Far

This is only the beginning. Think about how many more thoughts will have after rewatching the trailer for the 50th time.

In these times, take joy where you can.

It's the only suitable reaction.

This Meryl Streep meme mash-up is everything.

Not only did the full trailer drop on Monday, but the new The Last Jedi movie poster did too. In what seems like a fitting tribute, Fisher is also a prominent part of the poster, front and center.

Between the jaw-dropping trailer and powerful poster, there's enough to spur theory after theory to keep you occupied until the movie actually hits theaters in December. But then again, it wouldn't hurt if time flew by a teensy bit faster — just saying.

More like this
'Avatar 2' Now Has A Teaser Trailer & Release Date
By Jack Irvin and Alyssa Lapid
You Definitely Know The Voice Of Shuri's AI In 'Black Panther: Wakanda Forever'
By Brad Witter
This James Bond Event At Abbey Road Studios Was A 007 Fan's Dream
By Samantha Rollins
The 'Love Actually' Reunion Is Missing A Major Player
By Bustle UK
Get Even More From Bustle — Sign Up For The Newsletter