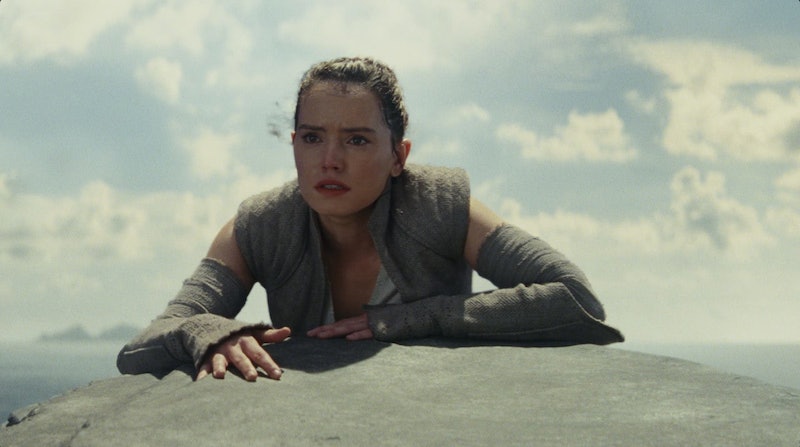 This article contains spoilers for Star Wars: The Rise of Skywalker. When the Star Wars: Episode IX title was first released back in April, it seemed that the final installment in the sequel trilogy would have some kind of strong connection to the original films, and the Skywalkers at the center of it. Rey's fate in Rise of Skywalker ended up being that connection, as the aspiring Jedi adopted her mentor's family name at the very end of the film, and seemed intent on following in Luke's footsteps.

The Rise of Skywalker revealed that Rey (Daisy Ridley) was connected to two major characters from the original Star Wars films: Luke Skywalker (Mark Hamill), who trained her to be a Jedi and the evil Emperor Palpatine (Ian Mcdiarmid), who was revealed to be her grandfather. Over the course of the film, Rey felt pulled between the two sides of the Force, and was concerned that her Palpatine heritage would cause her to defect from the Resistance and join the Dark Side.

But despite Rey's visions of being a Sith lord, she ultimately realized that the family that really mattered to her was the Skywalkers, who helped and guided her after her rescue from Jakku. And she doesn't just follow in Luke's footsteps by taking on his family name; in the final scene of the film, Rey arrives in Tatooine, where she buries Luke and Leia's lightsabers at his childhood home, and declares herself to be "Rey Skywalker."

According to Vanity Fair, Rey's ending — and the ending of the Skywalker Saga as a whole — is meant to parallel Luke's journey over the course of the original trilogy, down to the fact that the song John Williams wrote for that scene is titled "A New Home," as a nod to the original Star Wars film. Luke began the series as a nobody from a desert planet who was connected to the Force and later discovered that he was descended from one of the Empire's biggest villains. Rey's journey mirrored his almost exactly, with her final moments functioning as a companion to fans' very first introduction to Luke.

In addition to wrapping up the Skywalker Saga, Rey's final scene also leaves open the potential for to follow in Luke's footsteps by becoming a Jedi teacher in her own right. She buries the Skywalker siblings' sabers in the desert, and powers up her own lightsaber, made from her old staff and bearing a yellow beam.

If her story is meant to be a direct parallel to Luke's, then it would make sense for Rey to become a Jedi Master and teacher and train other people in order to prevent the Jedis from dying out entirely. Plus, if Finn (John Boyega) is, indeed, Force Sensitive, it would make sense that Rey would train him, the same way that Luke trained Leia before she became the general of the Resistance.

Whether Rey does decide to stay in seclusion on Tatooine, waiting for another aspiring Jedi to find her, or if she's simply paying tribute to the Skywalkers who became her family, either way, Disney has plenty of options for a follow-up show or spinoff movie centered on Rey rebuilding the Jedi Order. Rise of the Skywalker may have brought the Skywalker Saga to a close, but it still opens up plenty of opportunities for Rey's future and future Jedis to embark on their own journeys in a galaxy far, far away.