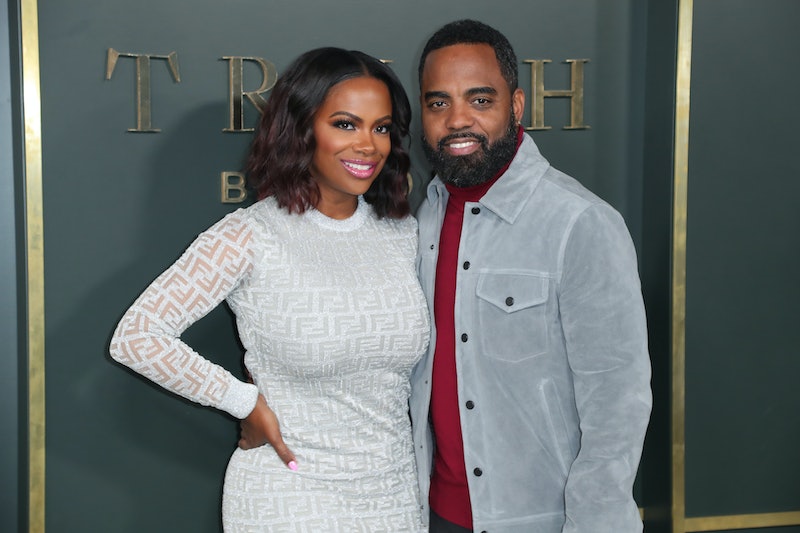 A Housewife just became a mom for the third time. The Real Housewives of Atlanta's Kandi Burruss welcomed a daughter via surrogate with husband Todd Tucker on Friday, Nov. 22, Entertainment Tonight reported the same day. The couple chose the name Blaze Tucker for the 8 lbs, 1 oz. baby who was born at 6:54 p.m., also per ET. In addition to the happy news, the reality TV star also shared a photo of Blaze (who already has lots of dark hair) holding onto her finger.

UPDATE: Burruss posted the aforementioned baby photo to Instagram on Saturday, Nov. 23, confirming all of ET's reported birth details. "Our little angel is doing well!" she captioned the post, in part. "She's gonna Blaze a path to greatness! @blazetucker is our newest heartbeat." (As of publication, the newborn already had almost 10,000 followers on the Instagram account her mom tagged.)

The RHOA star, who shares 3-year-old son Ace with Tucker, is also mom to daughter Riley, 17, and stepmom to 22-year-old Kaela. During the Bravo series' Season 11, the Kandi Koated cosmetics founder candidly discussed her fears about carrying her own child following her high-risk pregnancy with Ace and her history with fibroids (noncancerous growths in the uterus), per People. Burruss and Tucker agreed to use a surrogate after meeting a candidate named Shadina through Burruss' OBGYN, Married to Medicine's Dr. Jackie Walters.

During RHOA's current season she's been further discussing her surrogacy journey, which has included some other struggles as well. Burruss revealed during Season 12's Nov. 3 premiere episode that she and her husband were actually supposed to be having twins, but "one of them didn’t continue." Admitting it was "sad at first," she added that she "just had to be grateful that the one made it."

Burruss has said she's an "open book" and thinks it's "important to share" her fertility struggles. "I had to go through the IVF process to get my son, and I have been having some issues or whatever," she shared on a February episode of Busy Tonight. In the same interview with host Busy Philipps, she credited Housewives' executive producer Andy Cohen with making her "feel better" about her eventual surrogacy decision.

"I had made a comment. I said something like, 'I guess I'm gonna have a baby mama,' and he said to me, 'Don't you ever say that because you are the mother. And to say she's your baby's mom is taking away from you,'" she tearfully told Philipps of Cohen, who was expecting his first son, Benjamin, via surrogate at the time. "It made me feel better."

Now that baby Blaze has arrived, fans are eagerly hoping her RHOA debut will be imminent. While that remains to be seen, of course, the happy family is surely grateful for their newest addition.

More like this
These 10 Wild Real Housewives Fights & Moments Are Andy Cohen’s All-Time Faves
By Grace Wehniainen
Which RHODubai Housewife Has The Biggest Net Worth?
By Hugh McIntyre
‘RHOA’s Shereé Whitfield’s Boyfriend Tyrone Gilliams Hinted He’s Single
By Brad Witter
Kim Kardashian Reveals The First Text She Sent To Pete Davidson
By Jake Viswanath
Get Even More From Bustle — Sign Up For The Newsletter