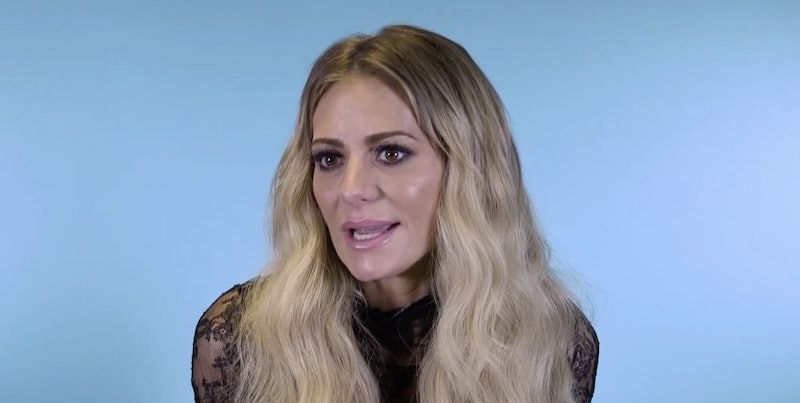 It’s been a major point of confusion for fans of Bravo’s Real Housewives of Beverly Hills this season, who have been wondering exactly where this seasons’s newest cast member Dorit Kemsley’s accent came from. Kemsley, who was born Connecticut, speaks with what sounds like a quasi-European accent that totally puts the likes of Gwyneth Paltrow and Martha Stewart to shame.

In a new promotional video for Bravo’s VideosByBravo YouTube channel, Kemsley offers an explanation for her accent, while also showcasing her linguistic skills.

"I think the way I speak is probably a combination of many things,” Kemsley says. “First and foremost I am married to a Brit, who’s got a very, very strong London accent, and I’m sure some of his inflections have sort of rolled over on me."

Technically, Kemsley and her husband, Paul (who goes by P.K.), only recently got married in 2015, but let’s not get too hung up on the details.

Kemsley explains that her years of traveling for work and pleasure have also contributed to her accent:

"My parents are not American. I was born and raised in America. I did spend a significant amount of time, nearly 10 years, back and forth going to Europe. I spent a lot of time working all over the world, and in various places of the world where people didn’t speak English all that well, I had a tendency to over-annunciate."

"Some of my English is part that, and part inflection, and you know, being around a lot of Europeans and Brits. You just become like a product of your environment really."

So true! And honestly, no one should have to worry about what someone else thinks of how they speak. It doesn’t really matter where your affectation came from, speak however you feel comfortable — just like Dorit!

Later in the video, Kemsley casually mentions the other languages she speaks in addition to English:

"I speak better Italian than I do Spanish. But, I spoke Spanish before Italian ... My Father’s Israeli. But I wasn’t raised speaking Hebrew, and I wanted to learn when I was a teenager. So I insisted my Father only speak to me in Hebrew."

What language is next for Kemsley? "French, I think, is my next one," she divulges. "Because I love it. I can understand it, but I can’t really speak it." If you haven't already heard it on the show, check out her accent for yourself, above.