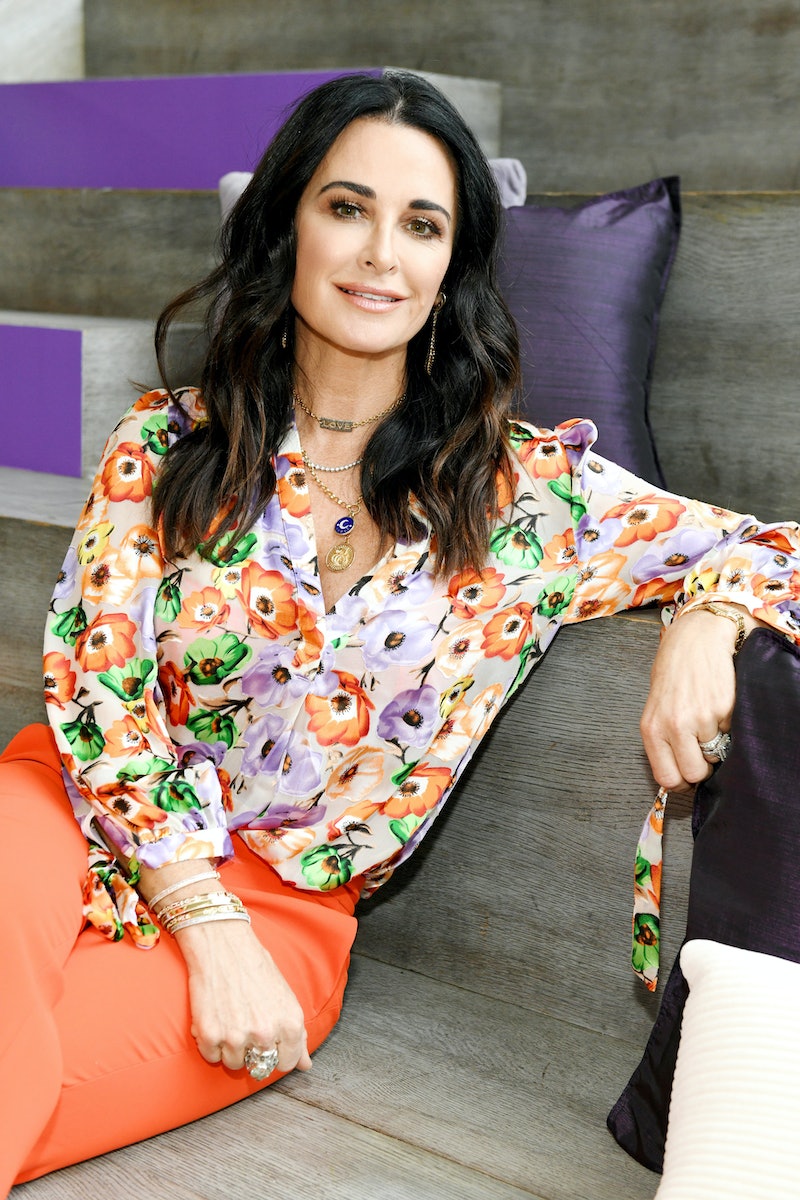 Real Housewives of Beverly Hills Season 9 will go down in Bravo history for being all about what is now collectively known as "the dog drama." Luckily, RHOBH star Kyle Richards promises that puppygate is over now and that fans have even more — hopefully more interesting, too— drama coming their way. Speaking with Bustle at the the Allergan Mother's Day event in New York City on May 11, Kyle says that we're all "pretty much past that." Finally! Let's get back to some fun new storylines.

She continued, "Of course, the topic will come up here and there, but we move on to other problems. There's also a lot of fun too with trips and lifestyle. Provence [France] is going to be a beautiful trip, although, of course, a crazy trip once again." It wouldn't be a Real Housewives trip if it wasn't a little off the rails.

Kyle didn't dish too much on the trip specifically, but she did tease something interesting that's coming up in the second half of the season. She adds, "I try not to do anything that would actually embarrass my kids, but there is a little something coming up that I'm actually nervous about. I think I'm going to send them away on a vacation the week that episode airs." What could she be referring to? Her makeout session with Mauricio on the May 14 episode? Surely they've seen some of that action in their home — so it must be yet to come. Hopefully, we'll know it when we see it.

One thing that the fans have already seen is some shade courtesy of the show's OG "villain," the one and only Camille Grammer. Kyle dished to Bustle that "there's been some incidents with Camille," which is putting mildly to be honest. Kyle adds that she sees what fans are seeing, too. "She's definitely giving me Season 1 Camille vibes, Kyle says. Does this mean Kyle is on the verge of yelling, "You're such a f*cking liar, Camille"? We can only hope for a resurgence of that iconic line.

Camille isn't the only cast member who might be on the outs with costars this season, either. After that showdown at Villa Rosa, Lisa Vanderpump stopped filming mid-season, leaving many to wonder if she's going to be at the reunion. Without referencing anyone specifically, Kyle says that she doesn't know if "everyone" is going to show up for taping. "There could be some no-shows, honestly," she says.

Even if that is the case, Kyle adds that, "There's enough going on with other situations that even if some people don't show up, there's still a lot to discuss. It's not going to be fun either way." The Bravo reunions are notoriously painful for the stars and Kyle can't help but add that they're "always awful." "No one wants to go. I think it's going to be a really bad one. I mean bad for the cast," she adds. That's understandable. Who wants to wear a form-fitting gown while arguing with frenemies for fourteen hours?

Filming this show seems like it can be pretty exhausting at times. The women go through drama, relive it by watching the episodes, and rehash it at the reunion and on social media. And this season is especially tough because of the intensity fan response on social media.

Kyle says that it's hard to balance the show's fandom with what's actually happening on and off camera. "I think that sometimes you just don't know how the audience is going to react to something. They may not see things that we see," she adds. "You try to get the whole story out, but it's open for interpretation. I think people see what they want to see. People believe what they want to believe. Sometimes you just have to say 'You know what? OK, do your thing.'"

Just like every other person on reality TV, Kyle has both fans and critics. Still, she's grateful for everyone who is so into the show, no matter what "team" they're on.

Kyle said, "The Housewives fans are very passionate, they are very invested, and have been following our lives for all these years. Sometimes it gets crazy. There's no doubt. I'm just thankful they're watching."