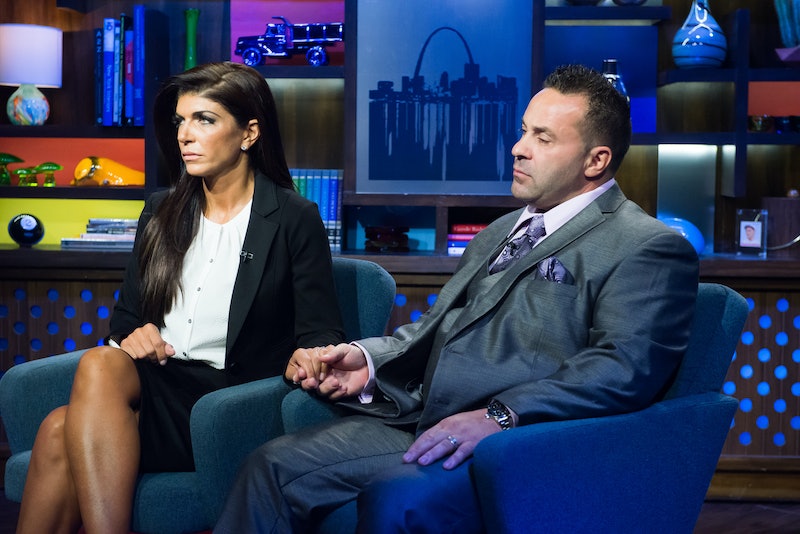 Real Housewives of New Jersey stars Teresa Giudice and Joe Giudice have split after 20 years of marriage, according to a PEOPLE report published on Dec. 17. While the two have reportedly been separated for some time, there are currently no plans to file for a divorce at the moment, according to a source close to the Giudice family. The source added that both Teresa and Joe “are focused” on their four daughters, Gia, 18, Gabriella, 15, Milania, 14, and Audriana, 10. Bustle reached out to representatives for Teresa for comment, but did not receive an immediate response.

The RHONJ stars' reported separation appears to be amicable. According to the source, Joe has already been dating, and Teresa is supportive. “They discussed their future when Teresa and the girls went to Italy in early November and they agreed that each had to move on. They are doing so amicably and very slowly,” the source claimed to PEOPLE.

On Instagram on Tuesday, Joe seemingly confirmed the split. Alongside a photo of the two, he wrote, “It’s Time To Let Go” and directed followers to a link in his bio to an Us Weekly article titled “Joe Giudice Posts About Love and Letting Go of the Past Amid Separation From Wife Teresa.” The piece referenced a previous Instagram post in which Joe wrote, in part, “Life is too short to be angry... Life is too short not to live our lives the way we want it.”

The reported separation comes after the two served time in prison for mail, wire, and bankruptcy fraud. Teresa was released in December 2015 after an 11-month sentence, while Joe was released in March of this year after a 41-month sentence. He currently resides in his homeland of Italy as he awaits the news of his deportation status. In October 2018, a judge ruled that Joe would be deported back to his homeland after his prison sentence, and his attorney has been fighting to appeal the decision ever since.

In November, Teresa reunited with Joe in Italy for the first time after several years apart. However, in an interview with PEOPLE later that month, Teresa admitted that their marriage was still in limbo after the reunion. “We’re just going to take day by day and see what happens. That’s basically it,” she said. “I mean, he lives in Italy, I live in America. I don’t know if that’s going to work.”

She added of the trip, "I was just very, very emotional. At the end of the day I just want Joe to be happy."