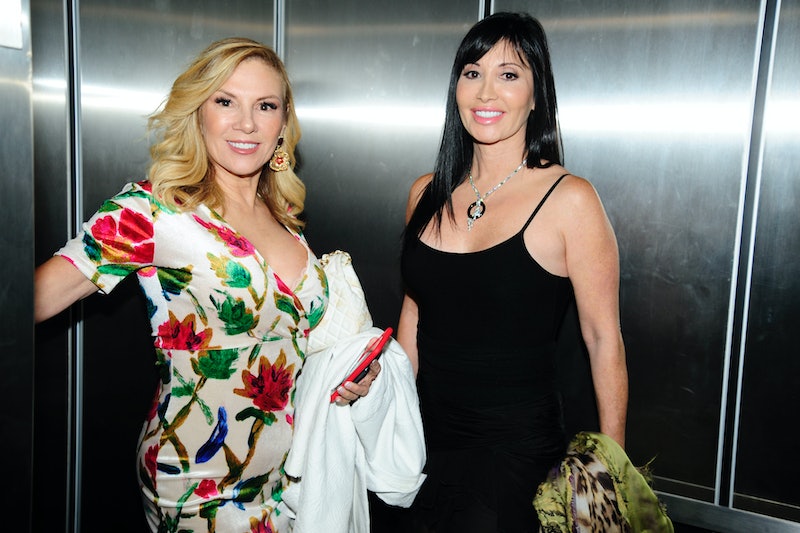 After making a few brief cameos at the beginning of Season 12, RHONY star Elyse Slaine made quite a splash when she referred to Sonja Morgan as her ex-husband's "accessory" at pal Ramona Singer's bizarre Hamptons house party. As Elyse recently explained to Us Weekly, her joining the Bravo series as a friend happened by accident.

"I never auditioned to be on the show," she told the magazine. "I was just catching up with Ramona and the two girls she was filming with in the first episode. The producers put a microphone on me and said, 'Get in there,' so I did. They liked the dynamic, so they invited me back again. They just sort of kept inviting me, so I just sort of kept showing up whenever I could. Then eventually, they gave me a contract."

Ramona and Sonja aren't the only Housewives with whom Elyse has deep history. The cryptocurrency trader has also known Dorinda Medley for some time, and also claimed she's the one who introduced onetime best friends and RHONY alums Bethenny Frankel and Jill Zarin. "I thought that they would enjoy knowing one another," she explained to the magazine of inviting Bethenny to a dinner with Jill and her late husband Bobby Zarin.

Since then, Elyse admitted that she and Bethenny "drift[ed] apart years ago" after having a falling out that was "really over nothing." Even so, she said she has "tremendous respect" for the Skinnygirl mogul and that they're friendly when they run into each other. She also fell out of touch with Jill over the years, but the pair "mended fences" following Bobby's 2018 death.

Elyse's LinkedIn profile indicates she worked as a financial journalist for Reuters in the '80s before transitioning over to trading. After working for companies such as Cantor Fitzgerald, she is now a self-employed full-time cryptocurrency trader. While working in the same industry, her now-ex-husband David Slaine became an undercover insider trading FBI informant from 2007 to 2009, after pleading guilty to conspiracy and securities fraud.

After Elyse and David, with whom she shares a 24-year-old daughter Nicole, split in 2013, she began dating hedge fund manager Donald Drapkin. The couple bought an approximately $4 million New York City apartment that year, but after amicably breaking up shortly thereafter, Elyse kept the apartment, per Page Six. Following Donald's 2016 death after a skiing accident, his children sued to prevent her from taking over the Park Avenue apartment in 2017, per The Sun. The case was dismissed months later.

Since then, Elyse has moved on, marrying Teza Capital Management executive Reinhold Gebert in October. Whether or not fans get to learn more of her story on screen, expect to see her continue popping up on RHONY this season.

More like this
Everything To Know About 'RHONY' Season 14
By Jake Viswanath, Alyssa Lapid and Brad Witter
'RHOSLC' Star Jen Shah Refuses To Do A Post-Sentencing Interview With Andy Cohen
By Brad Witter and Jake Viswanath
RHOP’s Robyn Dixon Explained Why Juan Paid For Another Woman's Hotel Room
By Brad Witter
Everything To Know About 'The Real Housewives Ultimate Girls Trip' Season 4
By Jake Viswanath
Get Even More From Bustle — Sign Up For The Newsletter
From hair trends to relationship advice, our daily newsletter has everything you need to sound like a person who’s on TikTok, even if you aren’t.