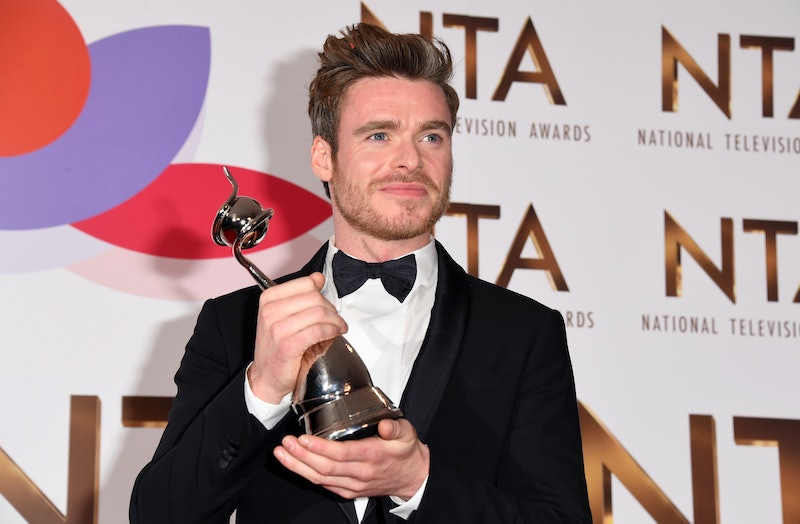 The twenty-fourth annual National Television Awards aired tonight on ITV, and viewers witnessed the stars of our favourite shows walk away with some of the biggest awards in the TV industry. Unlike other major awards shows, NTA winners are chosen by the Great British public, and as usual, the ceremony provided us with the selection of shocking, jovial and emotional moments that we've become accustomed to over the years. This year's NTAs 2019 winners included a bumper crop of talent, including Bodyguard's Richard Madden, who took home the gong for Best Drama Performance.

As usual, the lineup of nominees was compiled with some of the biggest names in television, each of whom hail from the worlds of soap opera, drama, reality TV, and more. One of the more competitive segments of the night has historically been the award for Best Serial Drama - and this year was certainly no different as soap heavyweights Hollyoaks, Emmerdale, Eastenders, and Coronation Street battled it out for the coveted award. And as reported by the Radio Times, Yorkshire took home the gold, after ITV's Emmerdale was officially crowned winner for the third year in a row.

However, it was the nation's favourite cockney, Danny Dyer, who bagged the award for Best Serial Drama Performance. During his emotionally-driven acceptance speech, Dyer said "I can't believe that wow, thank you. I want to thank all my EastEnders mob, I love you so much honestly, you're like my brothers and sisters." Although according to the Mirror, host Dermot O'Leary was forced to apologise for the Eastenders star's colourful language.

The various drama categories, which this year included Best New Drama, Best Drama Performance, and Best Drama, also included some seriously strong contenders in the form of Call The Midwife, Killing Eve, The Cry and more. But in the end it was the BBC thriller Bodyguard, actor Richard Madden, and Peaky Blinders who walked away triumphant in these categories, respectively. During his winners speech, Madden, who played Sgt David Budd in Bodyguard, thanked the viewers, cast and crew of the show, and as reported by The Sun, then gave the "biggest thank you" to his co-star, Keeley Hawes.

"Thank you very very much, what an honour I didn't expect thank you to every single person that voted. Big huge thank you to my team, it's a privilege everyday, Jed Mercurio for writing this incredible character. And the biggest thank you to Keeley Hawes I couldn't ask for a better more talented actress."

One returning segment of the annual ceremony was of course the Special Recognition Award — and this year it was the turn of BBC veteran presenter, David Dimbleby, to accept the honour. Whilst on stage, the 80-year-old referenced his previous role on the political discussion show Question Time. As reported by the Mirror, Dimbleby said: "I hope that I’ll be able to carry on asking questions for years to come."

In light of recent events surrounding Ant McPartlin's personal struggles, anticipation for the Best Television Presenter award was perhaps more heightened than usual. And to the joy of many, the presenting duo (Ant and Dec) were officially named winners of the category for their work on ITV's Saturday Night Takeaway and Britain's Got Talent. Due to the pair's prior commitment of filming the 2019 BGT auditions, the awards show cut live to the audition theatre where soon after, McPartlin began his emotionally-charged speech. According to the Express, he said, "This is a genuine shock, especially this year. I'm shaking here. We want to say thank you to everybody, I mean I really don't think I can accept it this year," and went on to thank lifelong friend, Declan Donnelly, for taking the reins of their usually shared TV gigs over the past year. He added "One reason why we won this award was this guy."