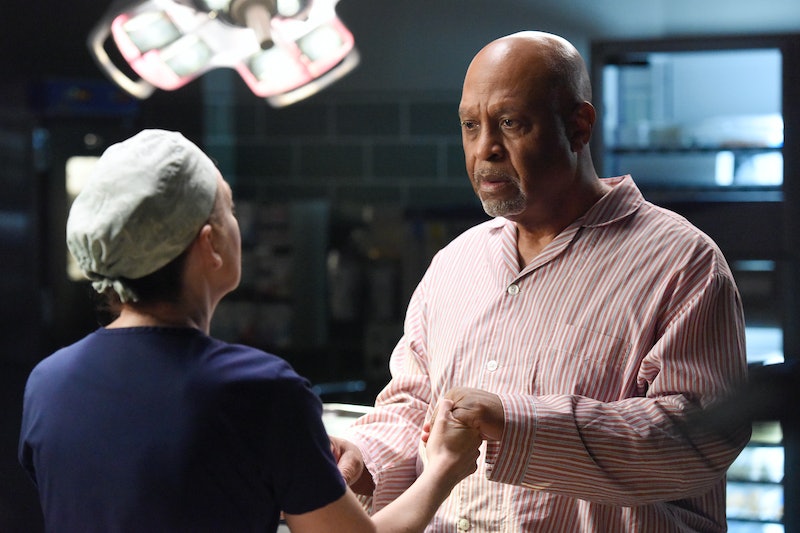 Spoilers ahead for Grey's Anatomy Season 16. Well, it wasn't the season finale that ABC had originally planned, but finding out Richard Webber's diagnosis in Grey's Anatomy's April 9 episode was the good news we all need right now. Though it seemed everyone except Meredith and DeLuca had resigned themselves to the fact that Richard had Alzheimer's, the reality was thankfully much simpler.

Leave it to Meredith to make the 11th-hour discovery that something was destroying Richard's nervous system, just as Catherine was about to take her ailing husband home to face his fate. As awful as that revelation may sound, the silver lining was that those symptoms were inconsistent with Amelia and Koracick's Alzheimer's diagnosis. Before Mer and Bailey could perform a nerve biopsy, however, DeLuca frantically busted into the OR with the real answer to what's been going on with Richard: he had cobalt poisoning.

In a throwaway line about Richard's medical history in the previous episode, Bailey mentioned that he'd had a hip replacement in Boston. When you slip that in amid a brain tumor and electrocution, it seems pretty insignificant. But DeLuca figured out that if Richard's hip replacement was made out of cobalt and was deteriorating, he could be experiencing metal poisoning, which would account for his memory loss, depression, hallucination, and tremors.

After nearly incurring the full weight of Bailey's wrath, DeLuca turned out to be right, and Bailey reluctantly let him scrub in for Richard's surgery. Link cleaned out the "sludge" that had built up in Richard's body and successfully repaired his hip — all while Amelia was giving birth to their son, by the way — and commended DeLuca for his "amazing catch." He told his fellow surgeon that it could be a game-changer in the medical community at large, if other hip replacement patients begin testing positive for cobalt toxicity as well.

That should have left DeLuca feeling on top of the world, but in his final scene of the episode, Meredith was picking him up from the hospital floor in the midst of some sort of breakdown. "I don't... I can't...uh. I don't know what's going on," he admitted. Meredith insisted on taking him home, so they very well could be getting back together. Either way, expect to see DeLuca's mental health storyline continue to unfold in Season 17, and for Meredith to be an integral part of his support system.

Owen and Teddy similarly ended the season on a low note: Thanks to an extremely ill-timed butt dial, Owen had to hear Teddy and Koracick's hookup on his voicemail — mere hours before he and Teddy were meant to get married. Their wedding is now postponed... or more than likely, outright canceled. We'll have to wait until Season 17 to find out for sure, but at least the impromptu finale delivered a long-awaited resolution for Richard.