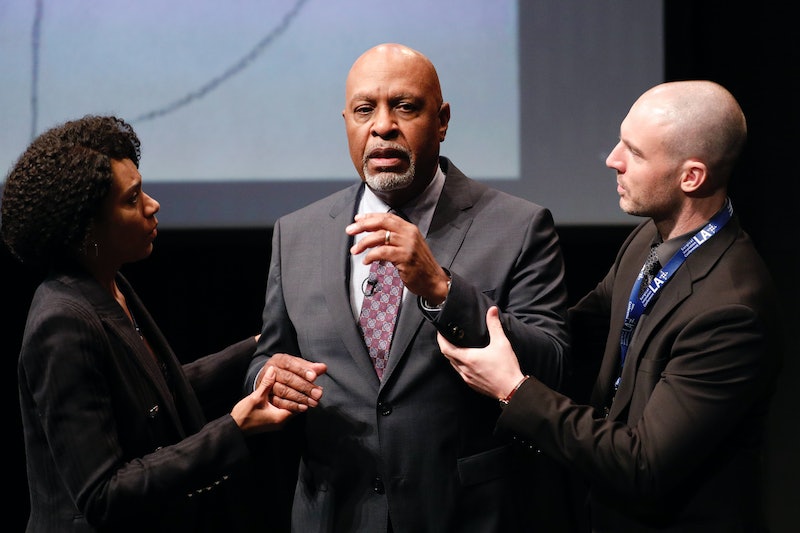 Spoilers ahead for Grey's Anatomy Season 16. Meredith began Grey's Anatomy's April 2 episode, "Sing It Again," reflecting on the moments we'd all rather not relive. After she spent most of Season 16's penultimate installment refusing to accept that Richard Webber might have Alzheimer's disease, the former Chief of Surgery spoke five words that snapped her right back to one of hers: "Ellis, something's wrong with me."

Yes, after calling Maggie by Meredith's name prior to his public meltdown in the previous episode, Richard has now mistaken Meredith for her late mother, famed surgeon Ellis Grey. This time, however, he doesn't seem to be snapping out of it. Longtime fans will recall Richard and Ellis had an affair years ago, which resulted in Maggie's birth. What's more, Ellis had a difficult battle with Alzheimer's herself that took a major toll on both Meredith and Richard.

So it's no wonder that Mer is flat-out refusing to accept an Alzheimer's diagnosis, and has now teamed up with DeLuca (still on suspension, following his suspected manic episode) to get to the bottom of what's wrong with Richard. Even though DeLuca had just ever so coldly told Meredith he doesn't love her, misery loves company apparently. And who better to join forces with than someone who obsesses with tricky cases almost as much as she does? Fingers crossed they really can figure out how to "fix" Richard because they — along with the rest of us — don't need any more tragedy right now.

Their efforts will play out in Grey's' moved-up Season 16 finale on April 9, but first let's take a look at how Richard's unknown type of "rapidly progressive dementia," as Maggie called it, played out in this episode. After reading Richard's brain scans, Amelia shared that it looked like it's "maybe not Alzheimer's." Maggie rebutted that they wouldn't see it if it was in the early stages, but Meredith had the last word. "It isn't Alzheimer's," she insisted. "I've had a front row seat to this disease. This is not it."

Either way, as Bailey stated when she briefed the crack team of docs, "everything is on the table" and "nothing is out of the question." What was clear, she told them, is that "he is not the Richard Webber you know and love." Maggie, who had trouble keeping her emotions at bay, similarly warned her colleagues that he's not himself. (Of course, they already knew that, as the videos of his "public episode" at the medical conference had already gone viral and even spawned several memes.)

Now suffering from memory lapses, tremors, depression, mood swings, and erratic behavior, as Bailey described, Richard had certainly reverted to earlier days, and his Ellis mention was only the beginning. (Bailey also reminded viewers of Richard's past medical history, including his brain tumor and electrocution.) Despite recognizing Catherine earlier in the episode, he later mentioned that his late wife Adele (who also had Alzheimer's) would get mad at him if he was late for dinner. He even dropped the OG hospital name, Seattle Grace.

Richard tried to do everything he could to prove he hadn't "lost his mind," but his cognitive impairment screening didn't do much to help his case when he was unable to repeat a pattern, draw a 3-D cube, or write in the numbers of a clock. The most heartbreaking scene, however, came when Richard wandered away from his bed, and Meredith found him hallucinating in an operating room holding a scalpel to his bare belly and insisting he's the only one who can "fix what's wrong." This all prompted Mer's big speech:

"Richard, I can fix you. And I know I can fix you because you are the one who taught me everything I know. I'm not just talking about surgery. You taught me how to be a better person, how to be a better mother. And what about my children? I want them to grow up and know who you are, please. And I still have things I need to learn. I need you; I'm not ready to let you go yet. And I know other people aren't either."

She can say that again. As fans continue to hold their breaths while Meredith and DeLuca pore over every possible alternative diagnosis, expect the "A" word to come up again in the finale. "It's Alzheimer's," Maggie says again in the preview for April 9's "Put on a Happy Face." Meredith's response: "I do not believe that it is." Fast-forward to a scene with Richard on the operating table and Bailey and Meredith about to perform surgery when DeLuca bursts in, "Stop, you're making a huge mistake!"

He tosses Bailey's surgical tools onto the floor, trying to get her to listen to him. Of course Bailey screamed for him to "get out," at that point. Hopefully someone takes his theory into serious consideration, instead of dismissing him due to his possible bipolar disorder, though. Fans saw how that previously worked out with the human trafficking victim, and we can't afford to lose Richard, too.