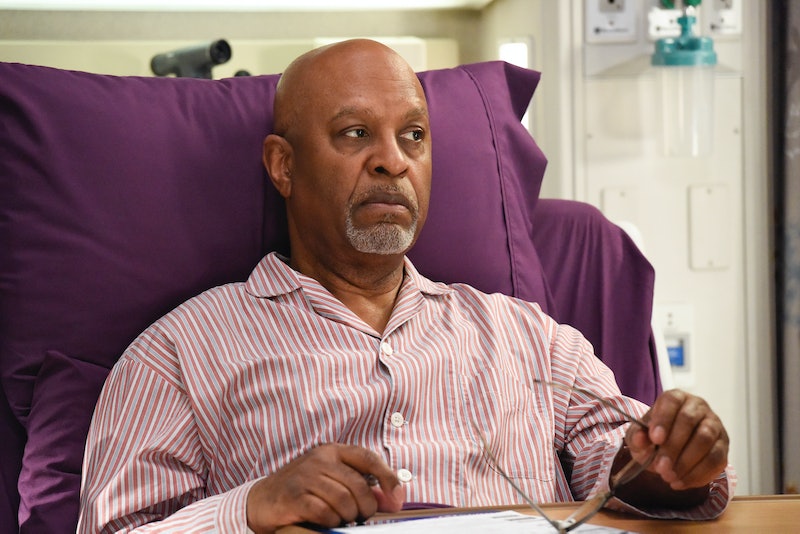 There's one thing every fan wants to know heading into Grey's Anatomy's Season 16 finale: what's wrong with Richard? The former Chief of Surgery hasn't been doing too well lately, having exhibited a series of increasingly alarming symptoms that put his fate in serious danger. Fortunately, it looks like we may finally get an answer in the April 9 episode — which, due to production shutdowns amid the COVID-19 pandemic, now serves as an early season finale.

Promos for the episode, titled "Put On A Happy Face," feature characters debating Dr. Webber's diagnosis — but some fans feel like they're one step ahead of the show, and that they're already solved the mystery of Richard's illness. Theories range from the expected to the totally bizarre, and while they can't all be right, somewhere among them the truth could very well be hiding. Will it turn out to be a shockingly simple solution? Or will the answer be something absolutely nobody expects?

Read on for the most popular theories.

The Occam's Razor of diagnoses is definitely that Richard has Alzheimer's. The disease has been a running theme in the show since the very beginning, and it's one fans and characters both suspected pretty much as soon as Richard starting exhibiting symptoms. However, there are a couple of faults with this theory. For one, two of Richard's three love interests on the show (Ellis and Adele) both died with Alzheimer's; it would be statistically extremely unlikely for Richard himself to get it as well. Secondly, if it's the answer everyone expects would it really be satisfying? And lastly, Meredith herself can be heard in the promo for the finale saying that she doesn't think it's Alzheimer's.

The very first symptom that Richard exhibited — before the dementia and hallucinations — was a tremor in his hands. That fact has led some fans, like Reddit user ouatfan30, to surmise that Dr. Webber is suffering from Parkinson's or a similar disease like Lewy Body Dementia (which actor Robin Williams suffered from before his death.) Sure, the doctors said they ruled that out in Season 16's penultimate episode, but it's always possible that they missed something.

Reddit user indigopaintthinner thinks they've cracked the case thanks to a recent Grey's Anatomy rewatch. All the way back in the Season 1 finale, "Who's Zoomin' Who," it was revealed that Richard had a brain tumor on his optic nerve. Derek, along with Meredith and Bailey, operated on it and successful removed it. But what if, all these years later, the tumor has returned… and metastasized onto Richard's brain? Sure, Grey's has already done brain tumor storylines with both Izzie and Amelia, so this would feel a bit been-there-done-that — but at least it would have foundation in the show's own long history.

Another possible explanation based on Richard's history is that his disease has some root in his alcoholism. His illness could turn out to be a result of complications from cirrhosis or liver failure… or Korsakoff's Syndrome, as Reddit user HomieGProtein theorizes. That disease is caused by a lack of Vitamin B1, which itself is often caused by malnutrition, eating disorders, or alcoholism, and can lead to confusion and memory loss. Sounds like a solution that could fit this puzzle very nicely.

Have you ever seen the Netflix movie Brain On Fire? Reddit user horchato578 has, and thinks it holds the key to Richard's diagnosis. Chloë Grace Moretz stars in the 2016 film, which is based on a true story, as a young woman exhibiting symptoms very similar to Dr. Webber's, including erratic behavior and hallucinations. She is nearly committed to a psychiatric ward before a determined doctor finds the truth: she's suffering from a rare disease called encephalitis, which causes inflammation of the brain. Could Richard have the same thing?

Some fans are looking for even more bizarre explanations for Richard's illness. After watching the Netflix documentary The Bleeding Edge, Reddit user ginny002 came up with the theory that Richard is suffering from metal poisoning. While going through Richard's medical history in the previous episode, the show made a point of mentioning a hitherto unheard-of hip replacement. The Bleeding Edge told the story of a patient whose hip replacement, which was made of cobalt, deteriorated and seeped into their blood, poisoning them from the inside. It would certainly be very much like Grey's to have something as commonplace and unexpected as a hip replacement cause such a dramatic and mystifying illness.

Reddit user MaryRhodaPhyllis has a different theory: "I think Richard is currently suffering from 'cliffhanger ailment' — a common Seattle Grace malaise that crops up in the latter half of a season and flares up right around Sweeps, only to retract and dissipate shortly after the show returns in the fall." They might be onto something here…

Hopefully "Put On A Happy Face" brings some closure to Richard's mystery illness and doesn't leave fans hanging all summer.