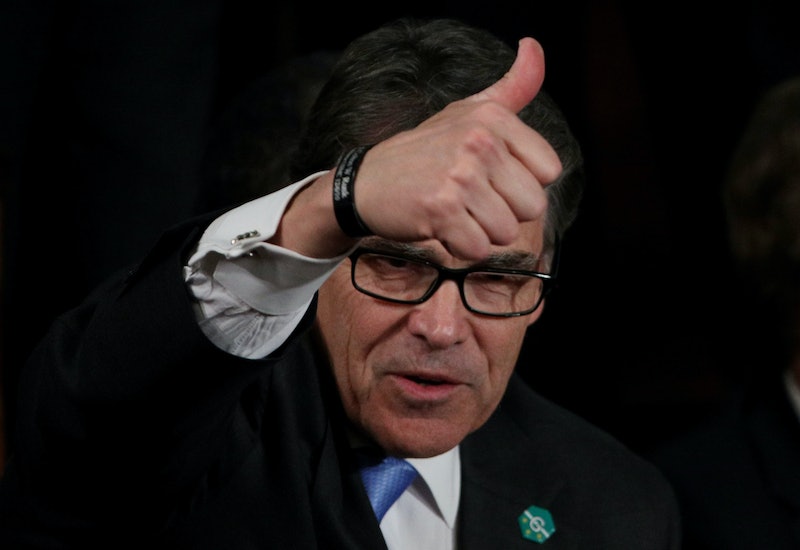 I think it's absolutely fair to say that the bar was set pretty low as far as expectations go for the National Security Advisor position — perhaps that's why Rick Perry replacing Steve Bannon for the job actually feels like a better move, given the circumstances. Bannon was ousted from his controversial role on Wednesday, after much criticism from both sides of the aisle. Perry may have his own baggage, of course, but he at least seems to be a far cry from Bannon's promotion of the alt-right.

The former Texas politician is just that — a politician. And perhaps in these times, that's the best we can ask for from this administration. Trump has, after all, taken to filling his top positions with a mix of ill-equipped candidates (see: Betsy Devos) and celebrities (see: Omarosa). No word on whether Perry's tenure on Dancing with the Stars crosses him over to the celebrity side of things, but I'lll assume he's safe for now.

For all of Perry's memorable blunders, he has had some successes. The Texas governor was key in reshaping infrastructure for his state, and likewise oversaw a renewable energy transformation that put Texas at the top for wind power in the country. He also helped to foster job growth throughout the aughts. That being said, he's also called the science behind climate change "unsettled" in the past, which is a concerning statement coming from the Energy Secretary.

Does that make him the right person for the national security advisor position, where he will be expected to serve as a senior level aide on national affairs? Maybe or maybe not, but he at the very least brings a traditional resume back to a White House that has suffered from some clear inconsistencies.

But that isn't to say Bannon will be out of the White House for good. In fact, he may not be going anywhere at all.

Vice President Mike Pence told Fox News: "[Bannon is] going to continue to play important policy roles." He insisted that the ousting was not a demotion, but rather “just a natural evolution to ensure the National Security Council is organized in a way that best serves the president in resolving and making those difficult decisions."

Even after the shakeup, Bannon will maintain his security clearance and can still attend National Security Council meetings. He had reportedly only attended one such meeting before being replaced by Perry.

Who know if things will be any different — but perhaps there is a shot with Perry at the helm. And to be clear, I never thought I'd be saying that, but desperate times call for desperate measures, I guess.