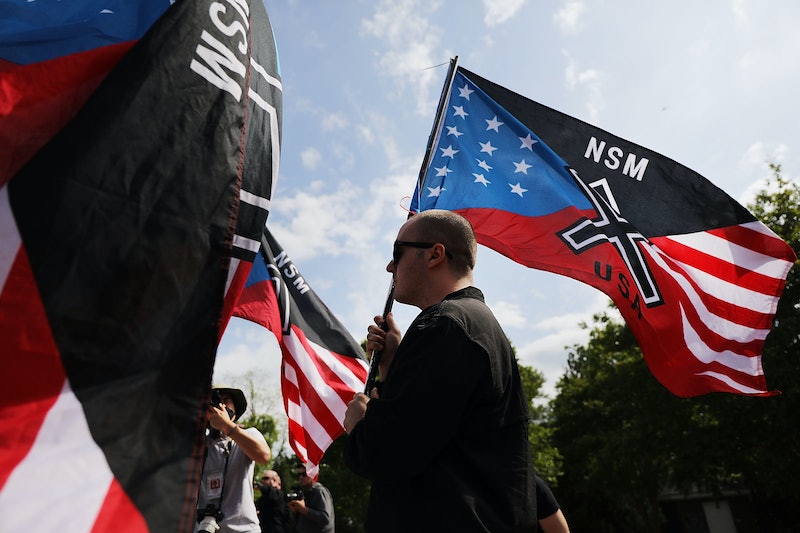 If it seems like domestic terrorism has been in the news a lot, it's not just because the media has been covering it more. Extremist violence has been on the rise in the United States in the past couple of years, and there's one ideology in particular that's been driving that jump, a new report found. The frequency of right-wing extremist violence has risen significantly, according to data analysis done by The Washington Post — and that trend was particularly clear in the first two years of the Trump administration.

Late 2018, as Wesley Lowery, Kimberly Kindy, and Andrew Ba Tran at The Washington Post pointed out, has made the pattern quite evident, with tragic events like the shooting that claimed two black victims in Kentucky and the deadly attack at a synagogue in Pittsburgh drawing attention to the prevalence of right-wing violence. The trend of rising right-wing extremist violence appeared well before that, though — and in fact, The Washington Post only analyzed data up through the end of 2017.

According to data from the Global Terrorism Database, which SPLC used in its report, there was a significant decrease in global terrorist incidents between 2014 and 2017, with the numbers going from about 17,000 in 2014 to about 11,000 in 2017. This decrease was not reflected in the numbers in the United States, however. As Quartz pointed out using the same Global Terrorism Database, there were six domestic terror attacks in the United States in 2006, which was the low point — but the numbers have gone up fairly steadily since that time to hit the 65 in 2017.

The prevalence of right-wing attacks started growing during Barack Obama's presidency, driven by what the experts speaking to the Post referring to as "white anxiety."

Now, during President Donald Trump's presidency, right-wing extremists feel emboldened, and the pace of their attacks has sped up, according to the Post. Within this umbrella of right-wing violence, there are also some specific threads. As the Anti-Defamation League reported, anti-Semitic attacks jumped by 60 percent in 2017. An FBI analysis also showed that hate crimes rose 17 percent between 2016 and 2017.

Trump, as the Post noted, has repeatedly denied that any of his rhetoric has contributed to the rise in white-supremacist activity and right-wing extremism, but the data shows otherwise. Polls have also found that most Americans disagree with the president and instead believe that his rhetoric has contributed to at least the outwardly racist rhetoric currently proliferating on social media and elsewhere. Whatever the cause, though, the upwards trend in domestic terrorism is a troubling one, and it has marked effects for the groups of people targeted far beyond just the people involved in the attacks. Documenting and highlighting that is the first step towards eliminating it.