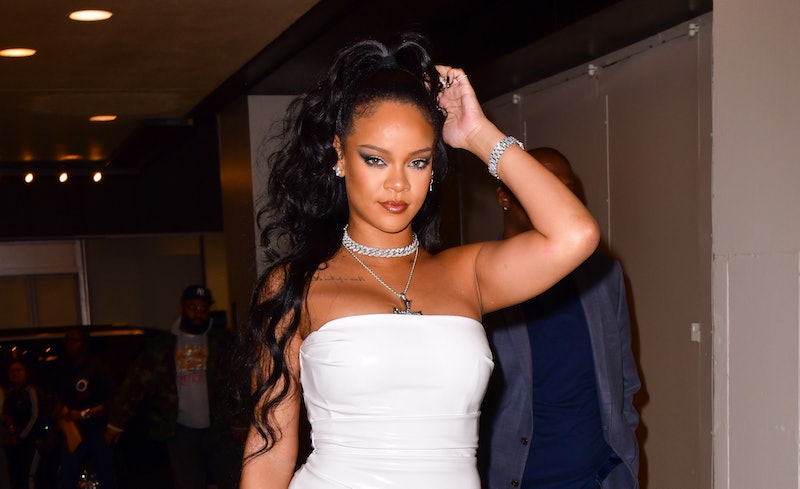 As the last few months of 2019 arrive, and we head into the holiday season, Rihanna would like to ask just one thing of her fans: Please stop asking her where her next album is. After the singer and Fenty beauty founder shared an Instagram post talking about her need to find "balance," Rihanna shut down social media comments about her new album, claiming that she doesn't need that "negativity" right now.

On Wednesday, Nov. 13, Rihanna posted a selfie on Instagram, explaining in the caption that 2019 had been an incredibly busy year for her, and that she had been neglecting her personal relationships. "To all my friends/family/coworkers who I have yet to get back to in the past months...please forgive me," Rihanna wrote. "This year has been quite an overwhelming one, and I’m working on that ish called Balance. brb."

In response, the singer's stylist and Fenty's junior creative director Jahleel Weaver posted a comment poking fun at the frequent questions Rihanna endures about the status of her upcoming ninth studio album. "Where's the album, heaux?!!!" Weaver commented, according to The Shade Room. "I don't need this kinda negativity in my life!" Rihanna jokingly responded, before letting Weaver know that he was officially "BLOCKT."

Rihanna released her last album, ANTI, back in 2016, and fans have been waiting for the follow-up ever since. "I’m doing music. Simultaneously doing lingerie, makeup, film, amongst a couple other things that I enjoy," Rihanna said in September 2018, per the Associated Press. "When the music is ready, you won’t have to ask for it. But it’s coming. Just not today sis. I’m hype too tho, it can’t come soon enough."

A few months later, Rihanna told fans on Instagram that she was planning to drop her ninth studio album — also known as R9 to fans and Rihanna's collaborators — in 2019. "R9 is great. R9 is amazing. It's incredible, and that's all I'm going to say," producer Kurt Haskell said on his own Instagram around the same time. However, as 2019 approaches its end, it seems less and less likely that Rihanna would be releasing R9 before the end of the year.

Still, the Rihanna Navy aren't the only ones disappointed to not have a new album from the singer; "It really does suck that it can't just come out, because I'm working on a really fun one right now," Rihanna told Interview magazine in June about her new music. "I'm really happy with a lot of the material we have so far, but I am not going to put it out until it's complete."

Now, please, let Rihanna work on her music — and her makeup empire, lingerie line and acting career — at her own pace.

More like this
The Beyhive Is Mad At Harry Styles After Beyoncé’s Album Of The Year Snub
By Jake Viswanath
The Meaning Of Steve Lacy’s “Bad Habit” Lyrics
By Radhika Menon
9 Photos Of Celebrity Couples & Unexpected Duos At The 2023 Grammys
By Jake Viswanath
The History Of Taylor Swift's "All Too Well" & What The Lyrics Actually Mean
By Jake Viswanath
Get Even More From Bustle — Sign Up For The Newsletter
From hair trends to relationship advice, our daily newsletter has everything you need to sound like a person who’s on TikTok, even if you aren’t.