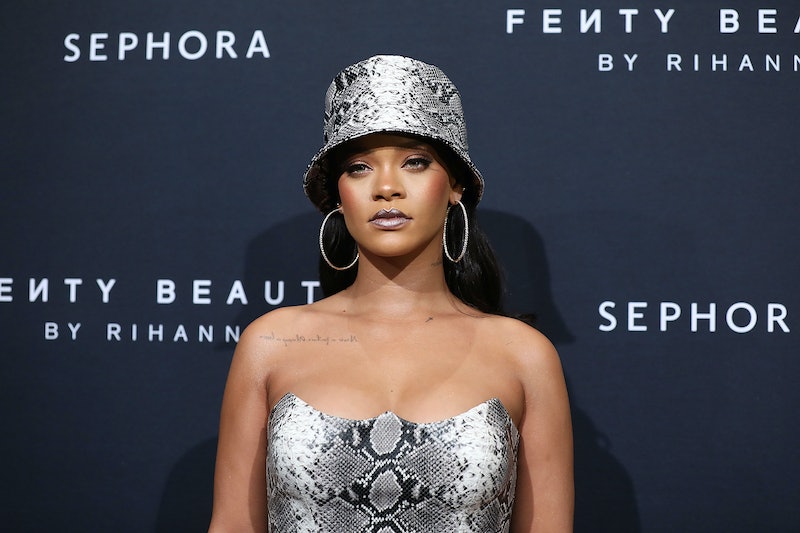 It's been nearly three years since Rihanna released Anti, but there's good news for the singer's fans. On Friday, Dec. 21, Rihanna confirmed her new album will be out in 2019. The singer posted a photo of a new Fenty Beauty product, but one fan was only looking for new music. The comment read: "But when is the album dropping Robyn? Can we have a release date for that?" The singer surprised fans by responding, writing back: "2019." In typical RiRi fashion, the answer was frank but also mysterious, as the star offered no further details.

Rihanna has kept information about the album under wraps, but her producer Kurt Harrell teased the record on his own Instagram, according to NME. When fans asked how the singer's 9th record, or R9, was coming along. He wrote "R9 is great. R9 is amazing. It's incredible, and that's all I'm going to say." The record would be the singer's first since Anti, which was released in January of 2016. Anti was a critical success and has a major fan following, though, notably, the experimental album did not score a No.1 hit. Fans are still excited for future music, which could end up being a double feature with more likely hits.

According to the AP report, an anonymous source hinted that the singer was not pleased with how Anti performed on the charts, and she might have two albums in the works. "She's currently recording two albums," the unnamed source said. "One full of chart-friendly songs, and another made up of moody and experimental tracks – and is considering releasing a double disc if she feels the songs won't mesh well on the same album."

On Twitter, fans responded to the album news with excitement. Even though the release could still be many months away, several fans hoped Rihanna would drop the album early in the year:

A few users pointed out that 2019 was going to be a major year for pop music, with Ariana Grande, Adele, Lady Gaga, and more artists coming out with new music.

A few other fans were just thrilled to hear the news at all. Rihanna released an album every year between 2005-2012, and it's unusual for listeners to have to wait so long for new tracks.

In 2017, Rihanna dropped "Wild Thoughts," a collaboration with DJ Khaled, but it was the first track the star had put out in a few years. Still, the years since the release of Anti have been busy for the star. In 2017, Rihanna launched Fenty Beauty, an inclusive makeup and beauty line. The products sold $72 million in just one month and was named one of Time's Best Inventions of 2017, according to Billboard. In 2017, Rihanna was named Humanitarian of the Year by Harvard University for her work promoting access to education in over 60 developing countries. In 2018, she also made her first significant foray into acting with the role of Nine Ball in the Ocean's 8 reboot.

The Rihanna Navy is clearly ready for the follow-up to Anti, and are sure to be excited the star has revealed new songs are on the way. Given the star's many projects, which include her beauty line, acting, and international philanthropy, it's not surprising the record is taking longer than usual. There's no way to tell when the album will drop in 2019, but the good news is fans won't have more than a year to wait for new jams.

More like this
The Beyhive Is Buzzing About Beyoncé’s 'Renaissance' Album
By Sam Ramsden
BLACKPINK Just Announced New Music — Here’s Everything You Should Know
By Grace Wehniainen
What Is Megan Thee Stallion’s Net Worth? The Traumazine Hitmaker Isn’t Worried About A Budget
By Hugh McIntyre
Megan The Stallion’s “Anxiety” Song Shouts Out Britney Spears & Whitney Houston
By Grace Wehniainen
Get Even More From Bustle — Sign Up For The Newsletter