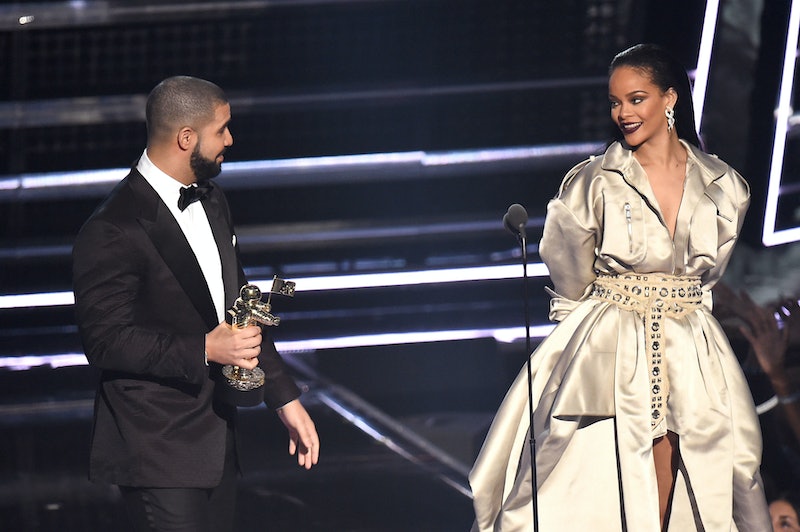 Rihanna and Drake have been through a lot together over the years: a declaration of love on the VMAs stage, a decade of breakup and makeup rumors, and now, a McDonalds-filled birthday celebration. Late Monday night, Rihanna attended Drake's 33rd birthday party. The "God's Plan" rapper didn't just bring out plenty of bottles at the LA nightclub — his crew also ordered a ton of McDonalds, specifically for Rihanna and her friends, according to The Shade Room.

While that may sound like a grand fast-food gesture, all reports about the party point to friendship, especially since Rihanna was joined by pals including Love & Hip Hop Hollywood star Lyrica Anderson (who shared a pic of all the McNuggets on IG Story). A source told E! News, "Her and Drake were talking for a while and were smiling and laughing... They looked like they were having fun together as friends." Us Weekly's insider also emphasized it was purely a platonic hangout between the exes.

Still, Drake and Rihanna's recent reunion is significant, since back in May 2018 the Fenty Beauty mogul told Vogue that the two weren't exactly on the best terms. She cryptically explained, "We don’t have a friendship now, but we’re not enemies either. It is what it is."

Drake and Rihanna have plenty of history together that traces all the way back to a bowling alley make-out session in 2009. A few months later, she clarified they were just friends. The two were rumored to be dating again in 2016, and speculation reached an all-time high thanks to Drake's speech about Rihanna at that year's MTV VMAs when he presented her with the Video Vanguard Award. He told the audience, "She's someone I've been in love with since I was 22 years old, she's one of my best friends in the world." Following that awards show moment, Drake and Rihanna shared a kiss onstage at his Miami tour stop in September 2016 and he also gave her a love-filled shoutout during his concert in Dublin in February 2017. However, their rumored romance reportedly fizzled out a few months later.

The singers may have been hanging out together recently, but that doesn't mean they're romantically involved again. After all, Rihanna is currently dating Hassan Jameel. In October, she confirmed the news, telling Vogue, "I’m actually in an exclusive relationship for quite some time, and it’s going really well, so I’m happy." So clearly a McDonalds-fueled party with Drake was nothing more than that.

Correction: An earlier version of this post included Drake's incorrect age. It has since been updated.