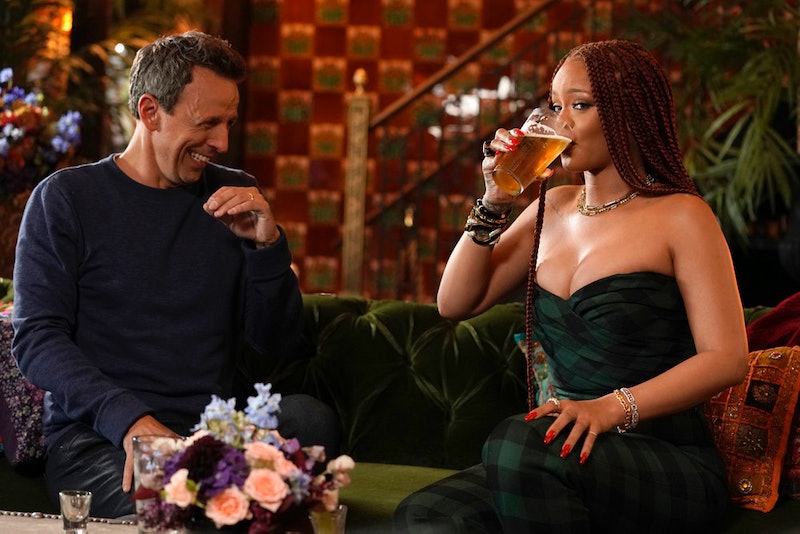 One order of the Under My Rum-brella cocktail, please. Because she inhabits the wisdom of a bartender, Rihanna got drunk with Seth Meyers on Late Night and gave him the best dating advice. The Fenty Beauty mogul appeared in a day drinking segment on Late Night with Seth Meyers on Thursday, June 20, where she consumed Rihanna-themed cocktails, exchanged life advice, and gave a Fenty Beauty makeover to the late night host that made him resemble that "one unicorn movie with the blue people" (side note: RiRi thought Avatar was inhabited by unicorns).

The segment began with Rihanna and Meyers sipping some Under My Rum-brella (filled with rum, chocolate rum balls, rum raisin ice cream, and a bunch of cocktail umbrellas), Diamond in the Rye (rye whiskey and Blue Diamond almond milk), and We Found Veuve in a Hostess Place (a champagne and Twinkie combo) cocktails. So, to really emulate a bar setting — since “bartenders are really good at giving advice” — Meyers elicited date night advice from Rihanna to “blow his wife away.” Her drunken answer rivaled a romance poem.

“I want to like, blow my wife away with a romantic night out,” Meyers said in the segment. “What do I do?” The “We Found Love” singer then replied through hysterics, “You said it. Blow your wife.” Her answer caught the late night host off guard. He exclaimed to the singer, “Rihanna, this is a network television show!”

Her explicit advice came after Meyers offered the singer some life advice, too. When Meyers asked about other possible career paths she could take, Rihanna revealed that she once wanted to be a pilot. “I actually wanted to be a pilot. When I realized my grades sucked.” Couldn't you so picture Rihanna chartering a plane? Plus, remember that Harper's Bazaar spread where she channeled Amelia Earhart?

Elsewhere in the segment, the singer and host engaged in other hilarious drunken shenanigans. In an effort to show off his “game,” Meyers tried his hand at various pickup lines geared toward the singer. “Hey. You look like a lady who was also underwhelmed by the Game of Thrones finale,” he said. To which RiRi responded, “I don’t watch Game of Thrones.” Later, after various failed pickup lines (“Are you the girl from Battleship?”), the beauty mogul gave Meyers a Fenty Beauty makeover to achieve a summer eye look.

Starting with some concealer application under Meyers’ eyes, the mogul applied some light blue liner on his lids. “I mean, my eye is burning. But this is amazing,” he quipped. As he applied more blue to his eyes, Rihanna experienced a film mix up as she tried to reference the inhabitants of Pandora. “You’re giving me… I meant to say unicorn but what’s that movie? With the blue people.” Seth then replied, “Your best guess on what the title of Avatar was Unicorn?” In her defense, those hybrids do low-key resemble unicorns. And, finally, the day drinking segment concluded with a spirited rendition of Rihanna’s “Work.”