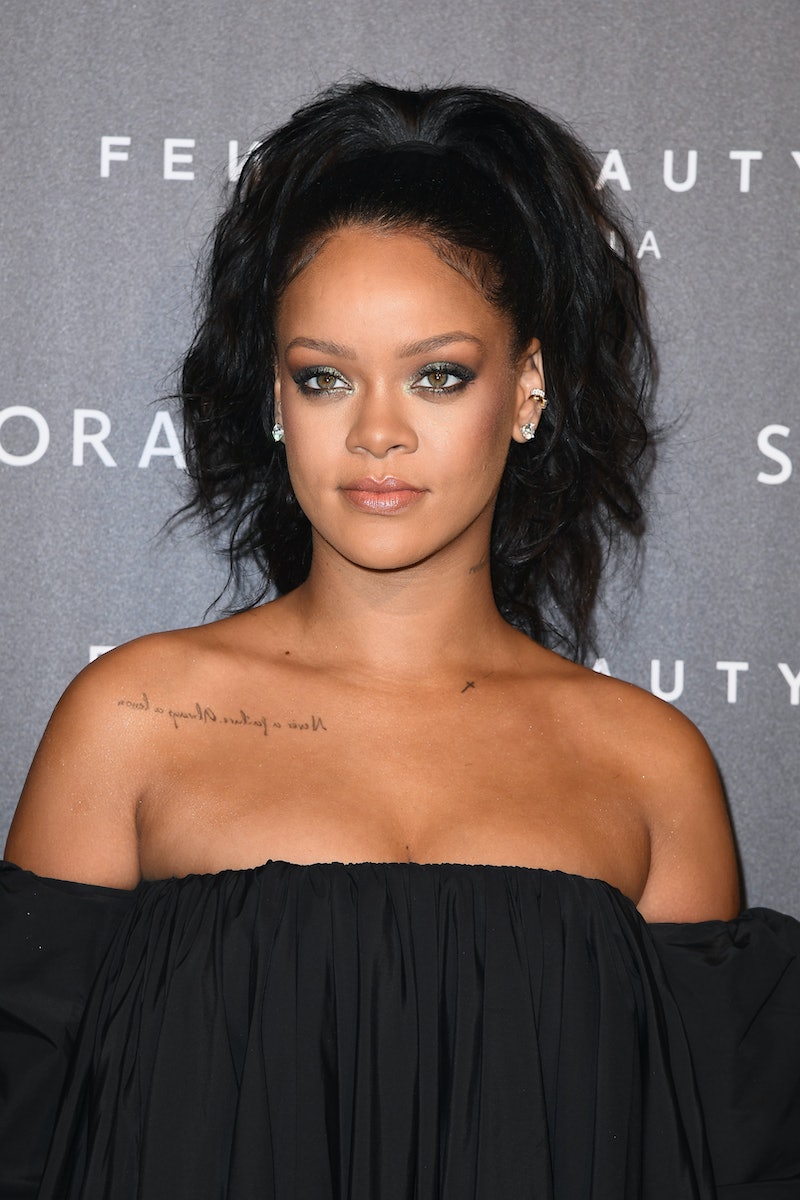 It's been more than a week since Hurricane Maria made landfall in Puerto Rico, and the country is still suffering in heartbreaking ways. Many people are criticizing the way president Donald Trump is handling the situation, and now, a certain singer is getting in on it. Rihanna tweeted Trump about Puerto Rico's devastation, and because she and many other celebrities don't believe Trump is doing enough, they are doing what they can to offer assistance on their own.

On Wednesday, New York Daily News released a cover imploring Trump to help the millions of Puerto Ricans with "no food, no water, no power, no medical care for the dying," calling the disaster an "American tragedy." And then, on Thursday, Rihanna tweeted out the cover to Trump, writing, "I know you've probably already seen this, but I just wanted to make sure! Don't let your people die like this." This tweet followed her message from Wednesday, where she forwarded Trump a video of the mayor of San Juan tearfully talking to CBS News.

Rihanna has been openly against Trump in the past, so it's not surprising that she took the opportunity to speak out against him again now — especially when so many people are still suffering from the effects of the hurricane.

This isn't the first time Rihanna has taken to Twitter to express her dissatisfaction with Trump's behavior and policies. Back in January, Rihanna tweeted about Trump's travel ban and his ban on Syrian refugees, writing, "Disgusted! The news is devastating! America is being ruined right before our eyes! What an immoral pig you have to be to implement such BS!!"

According to Vox, on Monday, Puerto Rican governor Ricardo Rosselló said that over 3.4 million people have been impacted by the hurricane, all of whom are American citizens. Earlier this week, Trump said that he plans to visit the country next Tuesday, and he has been widely criticized for waiting so long to offer aid. On Thursday, it was announced that he lifted the Jones Act, which will allow foreign ships to dock in Puerto Rico to get the people help faster.

In response to a question about the criticism that the Trump administration has received when it comes to supporting Puerto Rico, White House Press Secretary Sarah Huckabee Sanders said during a press briefing, "The federal response has been anything but slow. In fact, there has been an unprecedented push-through of billions of dollars in federal assistance that the administration has fought for."

Celebrities are taking action themselves to step up where some of them feel the president is lacking. On Wednesday, Pitbull sent a jet to Puerto Rico to help bring cancer patients to the mainland so they can get the treatment they need. "Thank God we're blessed to help. Just doing my part," Pitbull said in a statement to the New York Daily News. Jennifer Lopez donated $1 million to help with hurricane relief.

Then, on Wednesday night's edition of The Late Show, Stephen Colbert and Nick Kroll joined forces to share photos of their younger selves, promising to donate money to help the country's relief efforts as long as celebrities use the #PuberMe hashtag to post awkward photos of themselves during puberty online.

Thinking of the destruction the hurricane has caused is terrifying, but it's good to see that there are celebrities trying to make a difference.

Regardless of whether or not Rihanna's tweet has an impact on Trump, it's still commendable that she's using her platform to inspire change for the better. Even if Trump doesn't heed her advice, she's keeping her fans aware of what a horrifying situation this, and maybe some of them will decide to take action themselves because of it.

More like this
Rihanna Just Made Her First Official Outing Since Becoming A Mother
By El Hunt
What Is Ariana Grande's Net Worth? When It Comes To Money, She Has No “Problem”
By Hugh McIntyre
Rylan Clark Is Ready To Party
By Sam Ramsden
Travis Alabanza On Not Fitting In
By Sam Ramsden
Get Even More From Bustle — Sign Up For The Newsletter