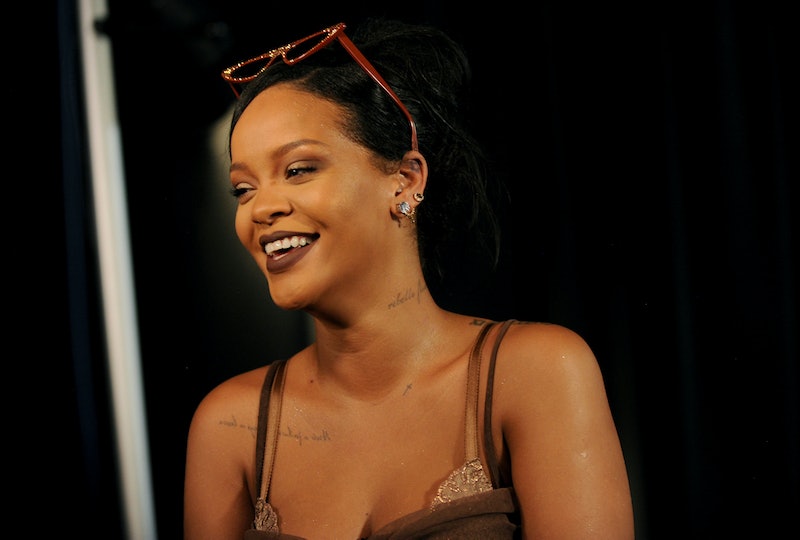 Makeup launches always seem a bit prim and proper to me. People in the beauty industry waltz around, quietly trying on samples and taking Insta snaps — well, that kind of thing just won't do for bad gal Rih Rih. Rihanna knows how to throw it down at a party and, on the night of Tuesday 2 April, the musician held a shindig for the new product launch for Fenty Beauty. Rihanna's launch, held in London, celebrated the new shades hitting Fenty Beauty, and was as loud as the Trophy Wife highlighter.

The shiny new range in question includes #SUNSTALKERBRONZER in eight shades, because, as we all know, "bronzer isn't a one-size fits all." And of course, it wouldn't be Fenty Beauty without some imaginative product names. The bronzers are called things like Shady Biz, Mocha Mami, Bajan Gyal, and Private Island, to name a few. The 'Man Down' singer also dropped three new shades of #BODYLAVA — the all over body shimmer that broke the internet. Also being released was the Cheek-Hugging Bronzer Brush, and the Sculpting Bronzer Brush contouring.

By the looks of social media, the April 2 launch party was an absolute a blast, with karaoke and "badgal" beer pong for the guests. Some of the world's best beauty and makeup content creators came along. Among the attendees were Jackie Aina, Patricia Bright, Alissa Ashley, and Nicki Jagger". Rih Rih was wearing a gorgeous yellow dress with yellow heels and glasses to match.

Aina, a beauty Youtuber with over 2 million subscribers tweeted that the launch was kept under wraps until it took place: "We’d been keeping the Rih Rih event secret for months and I’m so happy it finally happened I still really can’t even believe we met, took shots with, sang karaoke with and partied with Rih!!!!!" A vid was posted of Aina taking to the karaoke stage and perfectly rapping along to every word of "City Girls - Act Up," leaving Rihanna totally gobsmacked.

And, of course, Rihanna sang along with her guests and made sure to (obviously) blast some of her own hits such as "Wild Thoughts," according to Metro. There were dance offs, sing-alongs, and, of course, an opportunity for the beauty influencers to try out the new range. The 31-year-old singer even individually handed out goodie bags to everyone at the party, calling them out each by their names and giving them their own special thank yous, proving just how considerate she is.

Fenty Beauty took the beauty world by storm when it was released back in 2017. The super-pigmented eyeshadows, highlighters, and concealers, along with the 40-shade-strong foundation line, turned Fenty Beauty into one of the most talked about inclusive makeup brand. And Fenty Beauty isn't your average celeb makeup line; not only is the range such good quality, but it's affordable as far as high-end makeup goes, with a highlighter palette coming in for £34.

The Fenty Beauty London launch looked like a party everyone wished they were invited to. The singer really knows how to celebrate. And rightly so — the new range looks absolutely flawless.

You can buy the new Fenty Beauty range at Harvey Nichols or online.