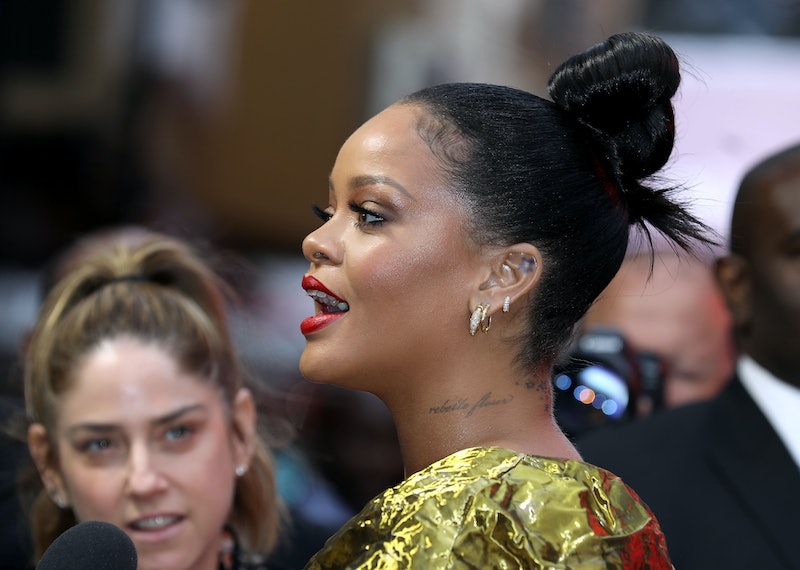 Doppelgängers are fascinating, aren't they? Like, how is it even possible for unrelated people to look so much alike? They're especially fascinating when celebrities are involved, and this latest look-alike discovery is one for the books. After a picture of a young girl recently went viral, Rihanna reacted to her young doppelgänger by re-sharing the photo on Instagram, as Entertainment Tonight reported. The singer's caption on the pic was the real kicker, though, and proved that even she thinks the similarities are shocking.

So, you should probably prepare yourself for what you're about to see. Seriously, it's that wild. First, make sure that you're sitting down, as fainting could potentially be a side effect. Know that your jaw *will* drop to the floor, so make sure that you're ready to catch it. Hold a loved one close. Minds will be blown.

Back in June, a woman named Bria shared a photo of her daughter Ala'a on Instagram. Nothing out of the ordinary there, right? Well, it didn't take too long for the pic to go viral, because Ala'a happens to look *just* like a pouty-faced, young Rihanna. So much so, that you might have a hard time believing that it's not Rihanna.

We now know for a fact that Ala'a is just an exceptional doppelgänger, thanks to the way that Rihanna herself responded. The star posted Bria's pic of Ala'a to her own account on July 23, and wrote in the caption, "almost drop my phone. how?" Same, Rih. Same.

Can you even begin to fathom what seeing something like that must feel like? Imagine that you're Rihanna, just aimlessly scrolling through Instagram one day, and you begin to notice that like, tons of people are tagging you in the same picture. Eventually, you decide to see what all the fuss is about, and then lo-and-behold, you're confronted by a photo that looks *so* much like a tiny you, that you almost drop your phone.

Fans in the comments section of Rihanna's re-post were just as shocked — if not more so — as the star herself. Some people assumed that the pic was a result of her using an app or filter that simply transformed her face. Other peoples minds were just straight-up blown beyond belief. "Wait. What. Stop. I'm dead. I can't. Handle. This," someone accurately exclaimed.

Even Snoop Dogg chimed in at one point, as @commentsbycelebs pointed out. "When did u have a baby," the rapper joked. For real, though, how is this child not related to Rihanna?

Ala'a's mother Bria seemed pretty thrilled with all the attention — not that anyone would blame her, of course — and shared Rihanna's re-post on Ala'a's own page with the caption, "Thank you @badgalriri for posting my picture! I’ve always wanted to be a model." Thanks to all this ruckus and Rihanna's recognition, that dream could very well end up becoming a reality.

What if Ala'a grows up to be a singer? Could the world even handle two Rihannas? We'll just have to wait and see.