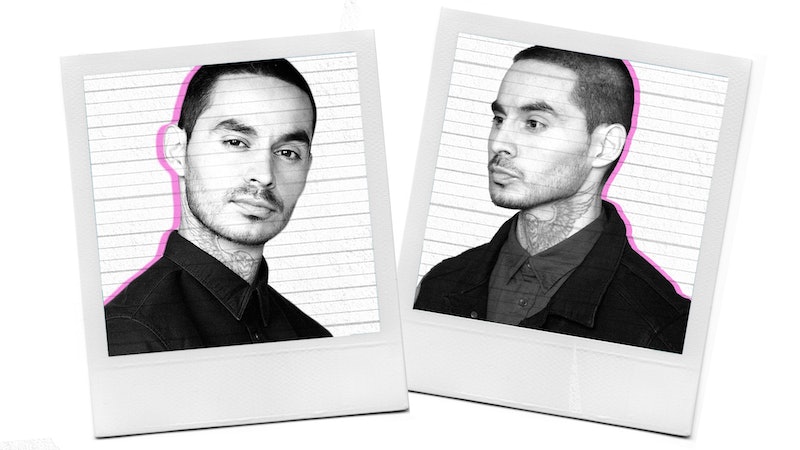 Imagine all of your bad boy fantasies embodied in one man. He is alluringly aloof; hopelessly unavailable. He might drive a motorcycle or maybe a dark, inconspicuous SUV, but really, you know nothing about him beyond that he is very hot and very dangerous, and that is enough for you to wind up screwing him in a dirty bar bathroom, high on adrenaline and instant regret.

That man is Good Girls' Rio, played by Manny Montana with a steely charm that can simultaneously make your knees weak and chill you to your core. A money-hungry crime boss, he seems to take pleasure in showing up at Beth's (Christina Hendricks) house in the middle of the night, often accompanying his threats with a flirtatious smirk that suggests lording over her is all one big game to him. But in spite of all his violent strong-arming, he remains impossibly, irresistibly sexy. As one fan put it on Twitter, "Rio from Good Girls could slit my throat and I'd say gracias."

The man who plays Rio is far less imposing. Montana says he finds the rampant thirst tweets flattering, albeit mildly uncomfortable. "I'm not on Twitter anymore, so I'm glad I don't have to see it," he tells me, laughing so much I can almost hear him blush through the phone. Outside of the show, Montana is Rio's polar opposite: he posts adoringly about his wife on Instagram, fiercely supports his friends, and fills his feed with kindness, generosity, and gratitude. A California native, he skews more laid back surfer than anything close to hardened criminal; SheKnows described him as "part little brother, part jokester."

Montana says he didn't feel "scary-looking enough" to play someone as cutthroat as Rio, so he and Good Girls creator Jenna Bans brainstormed ways to make him appear more intimidating. In addition to his wardrobe — Rio eschews the standard bad-boy leather jacket in favor of low-profile hoodies and dark button-downs — they settled on a massive neck tattoo of an angry-looking owl. They initially chose the animal simply because it "looked cool," but it eventually morphed into an apt metaphor for Rio: stealthy, all-seeing, and always poised to go in for the kill. "When the tattoo goes on my neck, I just feel different," Montana says.

An inextricable part of what makes Rio so enticing is the mysteriousness that shrouds his every move. Montana alludes to the fact that Rio has higher-ups, but if he's answering to anyone, he doesn't let on. When Beth breaks into his apartment to snoop in Season 2, she's surprised to find an impeccably decorated loft filled with perfectly folded sweaters and smiling photos of his son — further proof that there's much more to Rio than his looming presence in her life. Montana says the show will slowly reveal more of Rio's personality, but we'll likely never know the character fully. "I always feel like mystery sells. People want to wonder," he explains.

All of this combines with a husky, grizzled voice and a come-hither swagger to create a character so undeniably hot, his attractiveness inspired its own Reddit thread. Putting aside the implications of lusting after a toxic man, Rio is the personification of a thirst trap. In the words of Montana, "[He's] not somebody you would want to marry. But to have a little fun with? Maybe."