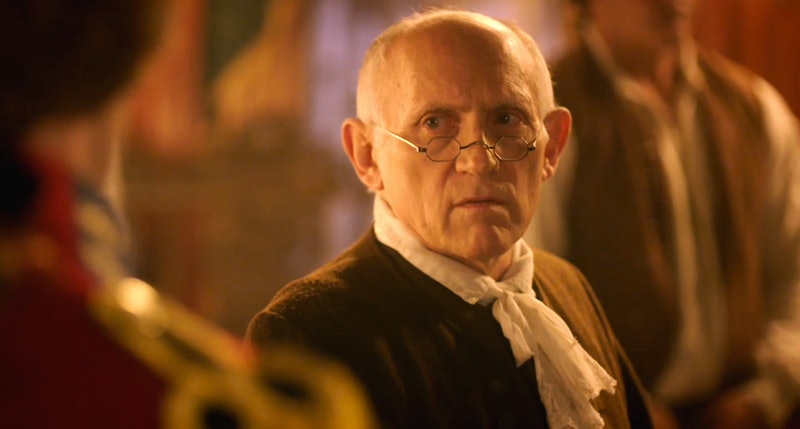 The reason for all of the time traveling on the NBC series Timeless is because of the actions of a secret organization called Rittenhouse. Yet, the Dec. 12 episode before the show went on hiatus revealed that Rittenhouse on Timeless is a person. And just like the rest of Timeless, David Rittenhouse is based on historical fact.

When Lucy, Wyatt, and Rufus traveled to New York in 1780 during the episode, "The Capture of Benedict Arnold," they actually teamed up with Garcia Flynn in an effort to take down Rittenhouse. Thanks to the key that Flynn got from Bonnie and Clyde in the previous episode, he discovered that the traitor Benedict Arnold was a founding member of Rittenhouse during the American Revolutionary War. From Arnold, Lucy, Wyatt, Rufus, and Flynn learned that the evil group Rittenhouse was formed by a man of the same name — David Rittenhouse.

According to Encyclopedia Britannica, Rittenhouse was an American astronomer and inventor. As Timeless has noted, Rittenhouse really was a clockmaker. He is also believed to have built the first U.S. telescope. In 1780, when "The Capture of Benedict Arnold" episode takes place, Rittenhouse in real life was treasurer of Pennsylvania. Later, in 1792, President George Washington would appoint him to be the first director of the U.S. Mint in Philadelphia. The park and neighborhood Rittenhouse Square in Philadelphia is named after him.

Yet, Timeless' depiction and actor Armin Shimerman's portrayal of Rittenhouse is much less flattering than history's. As revealed by Rittenhouse's son John on Timeless (I could not find any historical evidence about whether or not he existed), Rittenhouse doesn't believe in democracy and thinks he and the people in his organization must rule over the common people. As Lucy said, Rittenhouse wants tyranny disguised as democracy.

Beyond being an extreme elitist in Timeless, who thinks people who he regards as less than don't deserve to make their own choices, Rittenhouse is also racist and sexist — it was even implied he would rape Lucy. So, while it was slightly anticlimactic, Flynn killing Rittenhouse on Timeless during the Dec. 12 needed to be done. In real life, Rittenhouse lived until 1796.

Despite being killed by Flynn, Rittenhouse's agenda most likely did not die with him since his organization is woven into the fabric of America's history on Timeless. Plus, his son John escaped from Flynn, meaning he could carry out his father's disgusting legacy. As I imagine that the organization Rittenhouse will still exist when Season 1 of Timeless continues on Jan. 16, at least it's some consolation to know the real Rittenhouse wasn't anything like his Timeless counterpart — with the exception of his love of clocks.

More like this
The 'PLL: Original Sin' Creators Say A’s Identity Will Be “Very Clear” By The Season Finale
By Alyssa Lapid
Dr. Anna Pou Is Still Practicing Medicine After Facing Murder Charges
By Brad Witter
‘Stranger Things’ Stan Megan Thee Stallion Grilled Natalia Dyer About Nancy & Steve
By Brad Witter
Everything To Know About 'A League Of Their Own' Season 2
By Morgan Leigh Davies
Get Even More From Bustle — Sign Up For The Newsletter