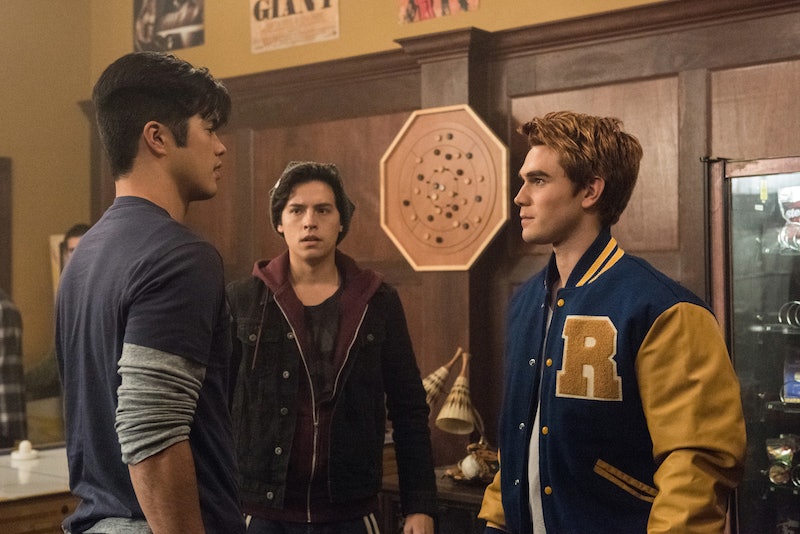 Even if you've never cracked the thin spine of a comic book in your life, chances are good that you've at least heard of Archie, Betty, Veronica, and Jughead. Those famous teen characters are getting a provocative reboot over at the CW. Riverdale premieres on Jan. 26, and asks the question, "What if the teen protagonists of Archie Comics found themselves embroiled in a sexy murder mystery?" It's an unexpected route to take in an adaptation of a comic book series that's renowned as a wholesome slice of small-town America nostalgia. Riverdale isn't based on a true story, but it's much more realistic than its colorful origins would suggest.

And this noir-ish television series is just the next stop in the long, illustrated life of Archie Andrews. The character first appeared on the page in 1941. For decades, he's dealt with problems familiar to the average high schooler: the big game, pleasing his parents, getting a table at the diner. Archie is also perpetually stuck in what must be one of fiction's longest-running love triangles, with girl-next-door Betty Cooper and rich princess Veronica Lodge. Those teenage headaches will still be there in Riverdale, with the added intrigue of a recently murdered classmate.

Visually, the tone the Riverdale trailer strikes is more Pretty Little Liars than Leave It To Beaver. But writer Roberto Aguirre-Sacasa told The A.V. Club that "a real touchstone" for this racy take on the comics is actually the David Lynch series Twin Peaks, which is getting its own revival on Showtime this year. The inciting incident for all kinds of weird stuff happening in Twin Peaks is also a murder. "And rather than follow an F.B.I. detective through the investigation, you follow the ramifications of that through the points of view of the students," Aguirre-Sacasa said to The A.V. Club of Riverdale.

The writer promised that the show will balance crime drama grit with the social machinations of high school. "The sweet spot of the show for me exists in the tension between the subversive and the dark and the more grown-up, and the more sexualized stuff," Aguirre-Sacasa explained in the same A.V. Club interview. Riverdale is all about duality; the mash-up of the all-American source material and the noir mystery layered on top of it should make the audience feel like Archie's home is a "wholesome small town" but with "this darkness alive" in it, he said.

To that end, the production design, costumes, and sets for the show aren't hyper-stylized. The show's Riverdale is comprised by the kind of classrooms and after-school hang-out spots you might actually find in a suburb. Cole Sprouse plays Jughead and told Den Of Geek that a trucker actually pulled up to the show's Vancouver greasy spoon set, hoping to grab a bite. "It's built as a fully-functioning diner, so I'm trying to convince everybody when we're off-season, you know, just turn it around," he said.

Archie Comics aren't an obvious jumping off point for creating a teen drama laden with danger, sex, and other gossip-worthy happenings. But Riverdale did just that. It's a bold choice that has the potential to be rewarded with a dedicated fandom, some new to Archie entirely.