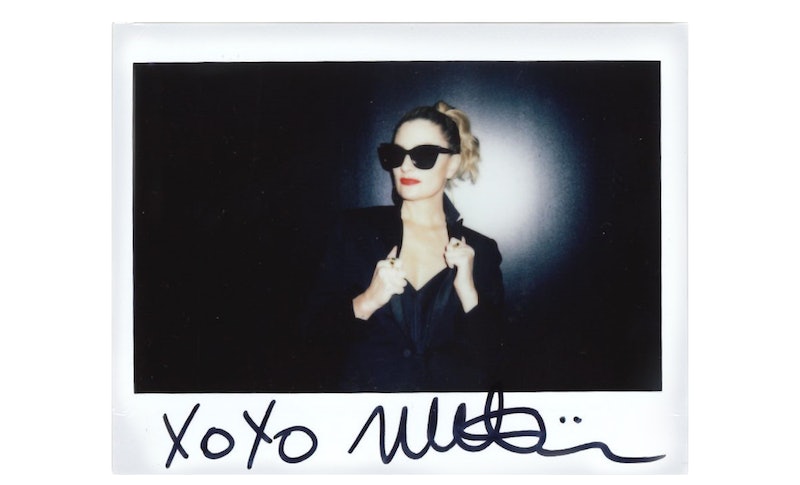 When celebrities hang out with Bustle writers, we want to give them the chance to leave their mark. Literally. So we hand them a pen, a piece of paper, a few questions, and ask them to get creative. The rest is up to them. This time, Riverdale star Mädchen Amick is leaving her mark in the Bustle Booth.

Mädchen Amick comes breezing into the Bustle office in a slick, all-black ensemble — like a mixture of Twin Peaks' Bobby Briggs and Riverdale's Penelope Blossom. The actor's been doing her own makeup this season on Riverdale, she explains, but an artist gave her the works today, with a full cat eye and scarlet lipstick. And while Amick's famous with millennials for her turn as Alice Cooper on Riverdale, others know her as Shelly Johnson, the Double R waitress on Twin Peaks. But although both of these women make poor relationship decisions and have feisty daughters, Amick sees her two iconic characters as total opposites.

It's no secret that Riverdale pays homage to Twin Peaks — showrunner Roberto Aguirre-Sacasa has said in interviews that he's heavily influenced by David Lynch's '90s horror mystery series, and casting a former Twin Peaks star in the show was almost certainly a nod to it. But although Amick's heard the comparisons, she recalls that when she first read the Riverdale script, she didn't think about Twin Peaks too much.

"It's about high school life, it's small-town Americana, and then it's showing the darker underbelly of that perfect little town. That's all very Twin Peaks, for sure," Amick says. "But I also feel like they’re two very different feeling shows." The actor cites the differences in pacing — while Riverdale barrels ahead at often breakneck speeds, she jokes that Twin Peaks would have a five-minute shot of a fan.

While Amick filmed the Riverdale pilot around the same time that she did Twin Peaks: The Return, the actor was able to differentiate her two characters just fine. "With Alice, I had hair in rollers, I was putting on the Spanx and the tweed skirts and the pumps and the hose," she explains. "So she was very uptight, very Type-A. And Shelly, to me, feels very free-spirited and obviously a lot more comfortable." She laughs recalling that scene in The Return where Shelly gets up from the table and makes out with Red in front of the diner, while Bobby and their daughter Becky are sitting inside. "Just working with David Lynch... puts you in a completely different mindset," she says.

And it's a testament to Amick's acting abilities that she's become such an icon on two different TV shows — for two different generations. "There was a time where I went to [Lynch] for just advice in the business," she recalls fondly. "I was frustrated with where my career was at, and this and that, and so I put together a reel of my work, and I asked him, I said, 'Would you mind just watching it and giving me your opinion?' And he refused. He said, 'No. You're Shelly! I don't want to see you in anything else!'"

But while both Shelly and Alice are mothers, Amick considers that the only thing they have in common. Shelly is more tentative in some of her decisions, she says, while Alice is headstrong. "Alice just goes straight in. She doesn't care about pushing away her daughter... she really bulldozes her way through mothering with Betty."

And since Alice is an imperfect mom, Amick often has to justify her character's actions. "She had a rough upbringing, and she has covered that up with so desperately trying to create this perfect world," the actor explains. "She wants to protect her daughters from what she grew up in. So I can forgive her decisions and play them with all my heart."

That said, the actor still struggled to understand why Alice donated Betty’s college funds to the Farm, which viewers see in Season 3, Episode 10. Amick recalls having a conversation with Aguirre-Sacasa in which she asked the showrunner to explain her character's motivations. "It's really that Alice is taking away Betty's options, little by little," she explains. "So she's cornering her into following her into the Farm.... Which is messed up."

And Riverdale viewers aren't the only ones who have no idea what's going to happen next. Amick says that it's anyone's guess (her theory is that the Gargoyle King and the Farm are somehow connected). But regardless of what happens, the actor says that Riverdale's characters are the show's true selling point. "I mean, there'll be a serial killer one season or a Gargoyle King the other, and so that's the thing that drives the storylines within the season, but really people tune in to see the characters that they’ve fallen in love with," she says. "So... whatever ride they take us on, it always comes back to these relationships that are messy and pure."

Alice may be a messy character and an imperfect mom, but Mädchen Amick makes playing her look effortless. Check out her answers to our Bustle Booth questionnaire below.