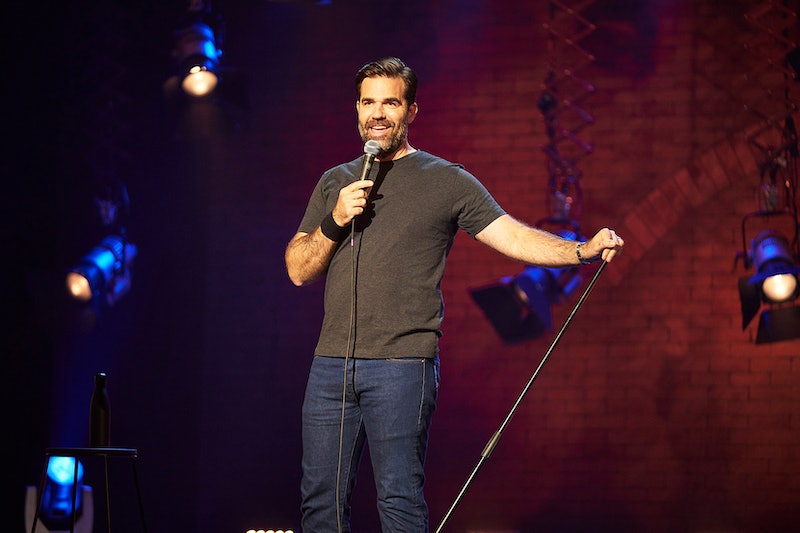 Rob Delaney looks genuinely happy. As he ticks off his peeves about his adopted hometown of London — “that the sun sets just after lunch for half the year”, that the steep Victorian staircases can literally kill you — he does it through teeth that won’t quit smiling. Jackie is Rob Delaney’s first comedy special since his BAFTA-winning show Catastrophe wrapped after four seasons, the first since he rose to fame as a consistently and brutally funny Twitter personality with 1.6 million followers. The Amazon special hits several subjects that he's tackled before: his distaste for the British monarchy (“what’s good about the monarchy is they let you know from birth that the deck is f*cking stacked”) and his adoration for the UK’s National Health Service (there’s an extended gag about going down on the universal healthcare system). But Jackie, recorded at the Hackney Empire in London, doesn’t feel as dark as Catastrophe or as punchy as Delaney’s political social media feed. It’s sillier and brighter.

Here, Delaney’s professed misanthropy is at odds with his grin and, more often than not, his comedy is full of people. There are stories about how great his wife is and how his kids really do say the darndest of all things — a bit about his young sons gleefully learning that they can marry men when they grow up might be the highlight of the hour.

Still, despite the daunted dad routine, the Delaney that surfaces in Jackie is less personal, less confessional than Delaney, the Twitter account. His relationships with his wife and his sons, which he discusses earnestly on social media, are flattened to affectionate punchlines. His politics might not be hidden, but it doesn't the lead the way it does online. It’s somewhat paradoxical to see someone speaking live and feel like you’re getting less of him. When it’s time for his routine to take a sentimental turn, Delaney spends it not on his family but on Jackie, the titular bearded dragon that his kids just had to have until a few hours later when they lost interest. But not Delaney, who loves Jackie enough to terrorize his own kids when the animal escapes — “she probably died in a great deal of pain and went to hell because of a series of choices that you made.” It's freshly hysterical. It's more arms-length than fans might be used to.

Some hallmarks of Delaney’s social media life — his support for Bernie Sanders, loving stories about his son Henry, who died from cancer in 2018 at the age of 2-and-a-half, a general frisson of thorniness — are notably absent from Jackie. Of course, Delaney knows that we'll notice. But this is not your favorite Twitter handle translating what he already does so well into another medium. It’s a comic with tons of natural charisma showing off the breadth of what he’s good at.