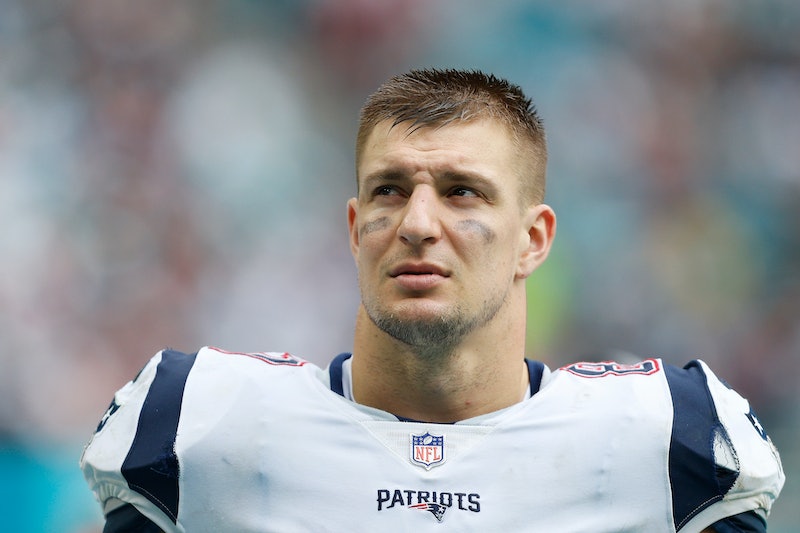 Now that Super Bowl Sunday is officially here, all eyes are on the athletes — including their personal lives. As it turns out, there's one player on the New England Patriots who has a sweet tie to Bachelor Nation. Yes, Rob Gronkowski and Jason Tartick's friendship goes way back — before either of them were on your TV screens.

In an Instagram post over the weekend, Jason wished Gronk well on the big game. The Bachelorette alum wrote:

"You can take the kid out of Buffalo, but you can’t take the Buffalo out of the kid. Good luck tomorrow, 3rd ring’s the charm! Let’s go! @gronk @ticcojohn @joey_bags22 #superbowl"

The caption accompanies a throwback photo of the friends, presumably at another pal's wedding. And no, he's not just name-dropping or trying to jump on the Pats' bandwagon; these two really have known each other forever.

In a July 2018 interview with Buffalo News, Jason spoke of his bond with Gronk. "We are all good buddies, we are all childhood friends," he told the publication. In fact, the football player had some thoughts following Jason's elimination from the popular ABC dating series.

"He said, 'I feel like now I am more of a romantic because of you and I thank you for that,'" Jason told Buffalo News of Gronk. "He was kind of joking around." Apparently Gronk also joked, "'Now when I am out with you, all the girls are going to go to you and not me.'"

Just like how Gronk supported Jason on The Bachelorette, the reality alum is always cheering on his friend. Not only did he post the aforementioned Instagram, but he's tweeted during football season. For instance, on Jan. 20, Jason applauded his skills on the field, writing, "What a freakin catch! @RobGronkowski."

And when a fan tried to question Jason's hometown loyalty, asking, "How can you root for the PATS?! you're from Buffalo," he smoothly replied, "But so is @RobGronkowski," along with a shrug emoji. Because friends come first, obviously.

According to some fans on Reddit, apparently Jason and Gronk met playing hockey together growing up. While that's yet to be confirmed, it is clear that they've had plenty of memories over the years. Here's another photo that Jason shared on Instagram with his famous friend in 2016:

On Super Bowl Sunday, Jason also shared a few Instagram Story screenshots from what looks like a race where Gronk pretty much stole the show. Or, as he put it in the caption, Jason "got [his] ass kicked." At least he has a sense of humor about it, right?

Knowing how much Jason interacts with his fans on Instagram and how much he has Gronk's back, this likely isn't the end of his posts during the big game. And who knows, maybe he'll even share some snapshots from watching the Super Bowl with his new Bachelor Nation girlfriend, Kaitlyn Bristowe. The couple just confirmed their relationship last week, and to say fans are excited is a major understatement.