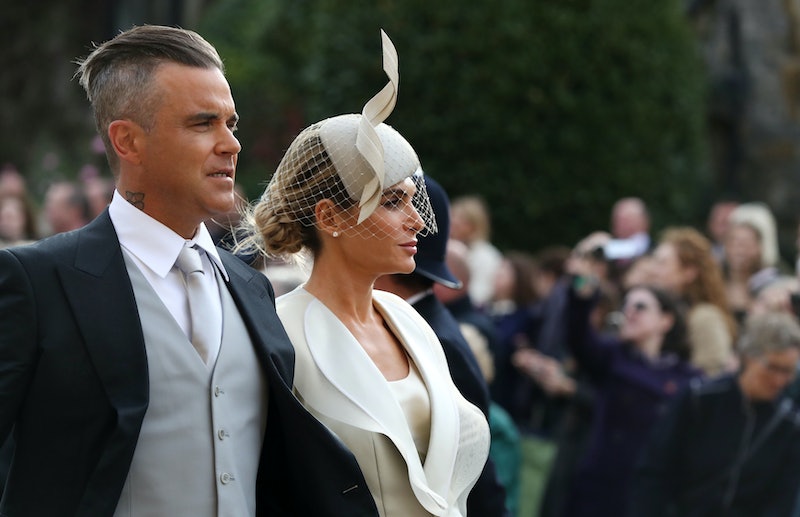 The royal wedding of Princess Eugenie and Jack Brooksbank has spawned quite the enviable line up of guests. The attendees include some of the most senior members of the royal family, and indeed many famous names such as singer Ellie Goulding, and current X Factor stars Robbie Williams and Ayda Field.

The couple, who currently work alongside one another as judges on the X Factor, arrived at the wedding in their finest attire, but it appears Field may have broken an unwritten wedding outfit rule. Whilst husband Williams opted for a classic suit ensemble, the 36-year-old actor has shown up wearing a very bridal white skirt suit and matching fascinator. As well as their six-year-old daughter, the pair also brought along Williams' mother to the wedding, who suffered an awkward mishap upon her arrival after her wedding hat appeared to blow down the street, prompting Robbie to save the day and retrieve it

Although it isn't unusual for celebrities to make appearances at a royal wedding, you may be wondering how the couple made it onto the exclusive royal guest list in the first place. As it turns out, both Williams and Field are good friends with Eugenie and the groom, according to the Mirror.

It was also recently announced that Williams and Fields' daughter, Theodora "Teddy" Rose Williams, would have an active role in the lavish ceremony as a bridesmaid of the Princess. The six-year-old was selected for the duty alongside three-year-old Princess Charlotte, daughter of Prince William, Duke of Cambridge and Catherine, Duchess of Cambridge.

This will be one of the rare occasions that the X Factor duo's daughter is seen in public, as her famous parents appear to make a conscious effort to keep her out of the limelight. This is seen on their social media posts, which when including Teddy, only ever show her from behind.

Other bridesmaids who were selected to be part of the ceremony include Princess Eugenie's five-year-old goddaughter Maud Windsor, the daughter of Lady Frederick Windsor and Lord Frederick Windsor. Mia Tindall, the four-year-old daughter of parents Zara and Mike Tindall also has the duty of royal bridesmaid alongside Savannah and Isla Philips, the daughters of Autumn and Peter Phillips. Elsewhere, Louis de Givenchy, the six-year old son of Olivier and Zoe De Givenchy was selected as a pageboy alongside Prince George. Older sister of the bride, Princess Beatrice, also has a significant role in the wedding celebration as the maid of honour.

The royal nuptials are taking place at St George’s Chapel in the grounds of Windsor Castle and will host esteemed guests including the likes of Prince Harry, Duke of Sussex and Meghan Markle, Duchess of Sussex, as well as celebrity guests such as Kate Moss and close pal Ellie Goulding. The wedding celebrations are also expected to run over two whole days, party planning company to the stars, Bentley's Entertainment, will reportedly host a second day of partying at the York Family residence, known as Royal Lodge, reports the Express.

The events of this spectacular day are being covered live by This Morning hosts Eamonn Holmes and Ruth Langsford on ITV, so you don't have to miss a minute of the royal spectacle.