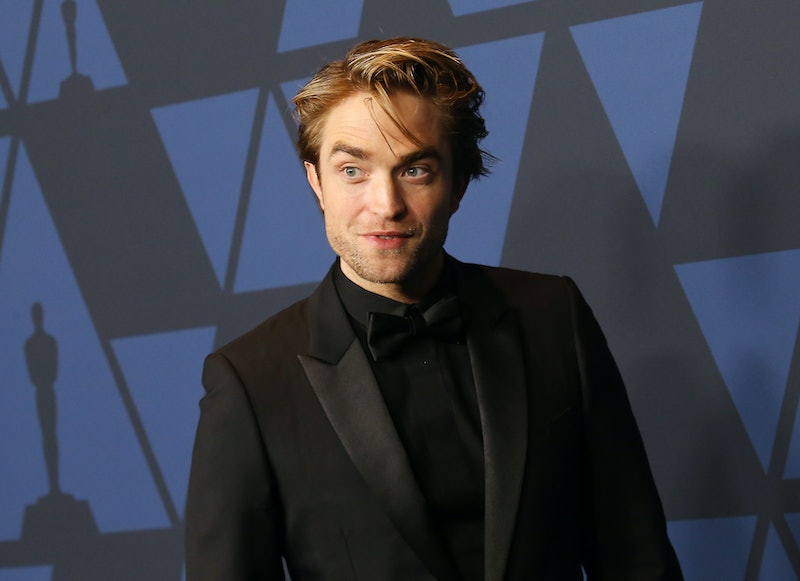 Allow the future Batman himself to share a chaotic social isolation recipe: Robert Pattinson cooked some pasta in quarantine — and it sounded like absolute pandemonium. Speaking from London where production on Matt Reeves’ The Batman has been halted due to COVID-19, Pattinson chatted about life in lockdown in an interview with GQ published on May 12 and revealed that he, too, has “lost all sense of time," and has started getting inventive in the kitchen.

Pattinson, it seems, has decided that a pandemic was the perfect time to create some new recipes, resulting in his own pasta creation called Piccolini Cuscino, or “Little Pillow.” While the optics alone are chaotic (he cooks pasta in the microwave), Pattinson's extensive process, as detailed by GQ, ended in a microwave explosion.

For context, Pattinson outlined a business idea he had last year: pasta, in the same genesis as burgers and pizzas, that can be held in one’s hand. He even designed a prototype that involved a panini press and presented the idea to a renowned Los Angeles-based food restaurateur. While the proposal didn’t go well, Pattinson made the recipe in real-time for GQ’s Zach Baron, who recalled the entire process in great specificity: penne, cooked with water via the microwave, wrapped in aluminum foil, interspersed with layers of sugar, nine cheese slices, sauce (“just any sauce”), crumbled Corn Flakes (he didn't have any breadcrumbs), and the top half of a bun — to be burnt with a novelty lighter.

“I’m really trying to sell this company,” Pattinson said after Baron remarked that it looked like he was cooking meth. “I’m doing this for my brand.” The actor then reportedly placed the Piccolini Cuscino into an “oven” (Baron, for his part, suggested it looks like another microwave), but when he returns, “a lightning bolt erupts from the oven/microwave” and causes him to duck “like someone outside has opened fire.” The “oven” inevitably goes dark. “Yeah, I think I have to leave that alone,” Pattinson said via FaceTime. “But that is a Piccolini Cuscino.”

Pattinson’s chaotic quarantine food venture was not only entertaining, it resonated with many in social isolation.

In his interview, Pattinson also discussed his affinity for cans of tuna with Tabasco, which has been well documented in the past, too. While filming Josh and Benny Safdie’s Good Time, Pattinson told Vulture in 2017 that he ate nothing but cans of tuna for the role. “I have this unhealthy thing where when I'm trying to lose weight I only eat tuna,” he said at the time. “And at the same time, I thought, ‘It's kind of healthy, I'll eat tuna.’”

Expect Pattinson's next creation, Piccolini Cuscino — but with some tuna, coming soon.

More like this
'The Queen’s Gambit' Season 2 Tweet Wasn’t From Anya Taylor-Joy
By Mary Kate McGrath, Jack Irvin and Grace Wehniainen
Netflix Shut Down 'Bridgerton' S3 Rumours About A “Very Dark” Storyline
By Bustle
Melanie Lynskey Plays A “Ruthless Leader” In 'The Last Of Us'
By Brad Witter
The Meaning Of Steve Lacy’s “Bad Habit” Lyrics
By Radhika Menon
Get Even More From Bustle — Sign Up For The Newsletter
From hair trends to relationship advice, our daily newsletter has everything you need to sound like a person who’s on TikTok, even if you aren’t.