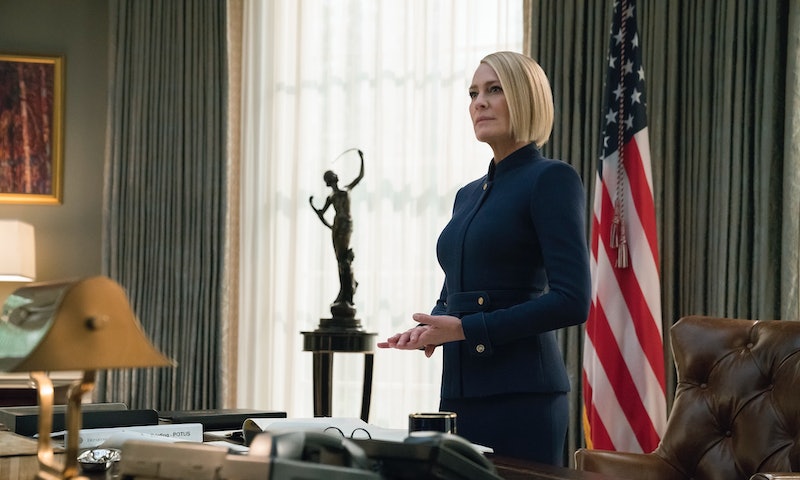 After Kevin Spacey was fired from House of Cards, there were questions about whether the show could even continue in his absence. But months later, the conversation is very different: the reveal that Robin Wright will direct House of Cards' series finale sends a clear message that she's more than capable of leading the show on her own. According to a new interview with The Hollywood Reporter, not only will Claire Underwood be elevated over Frank in the series' storyline, but Wright will be given an unprecedented level of creative control behind the camera as well. In short, the actor is taking the helm in more ways than one, leaving absolutely no ambiguity as to who is the real star of House of Cards.

Wright, her costar Michael Kelly, and co-showrunners Melissa James Gibson and Frank Pugliese sat down with THR for a panel to discuss the future of the show, which returns for its sixth and final season on Nov. 2. During the Wednesday, Oct. 17 conversation, the panelists touched on the elephant in the room, deftly explaining the mindset they brought to writing Spacey off the show. "We didn’t want to be coy about it and we didn’t want to run away from it," Gibson explained about the decision to kill off Frank Underwood. She continued:

"It would have been a big mistake to in any way pretend that the character didn’t exist or to erase the character somehow. Our way forward — the way we figured out the way forward — was basically to dig into the DNA of the show and honor the seeds of it and figure out what made sense as the next step."

Luckily for everyone involved, Claire Underwood's ascension was already the logical next step. The track had been laid at the end of Season 5, when Wright adopted her on-camera husband's signature, fourth-wall-breaking style, turning to the lens and saying, "My turn." So by the time Spacey was fired following multiple allegations of sexual assault, a majority of which the actor has denied through his lawyer, all the show had to do was lean harder into its original plan.

Gibson even called the re-centering of the show around Claire in the wake of Frank's disgrace "an organic progression," with Pugliese adding that the focus on Claire was "going to happen no matter what." So even though the decision to kill Frank inevitably involved rescheduling and rewrites, the team felt a responsibility to fans to fully deliver on the future they'd teased at the end of last season. Pugliese continued:

"We actually made a promise to the audience that that’s what we would explore. So, yes, we had to do another version of what this last season would be. But it was always about her turn."

But what they hadn't promised the audience is that Wright would return to the series as a director, so that choice sends a powerful message. The 52-year-old had previously directed the Season 5 finale, as well as eight additional episodes stretching back to 2014.

But giving her the final say on six seasons of television leaves no doubt as to her team's faith and trust in her. (Spacey, in contrast, doesn't have a single House of Cards directing credit.) As Gibson described it:

"It was so correct that Robin was the one to direct the finale, and she did such an incredible job, as always. It’s really a privilege to watch her shift hats so seamlessly."

And for her part, Wright seems to be the perfect fit for the weight that's been placed on her shoulders. She told the panel that the reason she became interested in directing in the first place was "having to keep my mouth shut for the last 15 years as an actor, where you are bursting at the seams." She's honing her voice on the series just as Spacey is losing his, which is a fitting end to House of Cards' six tumultuous seasons.