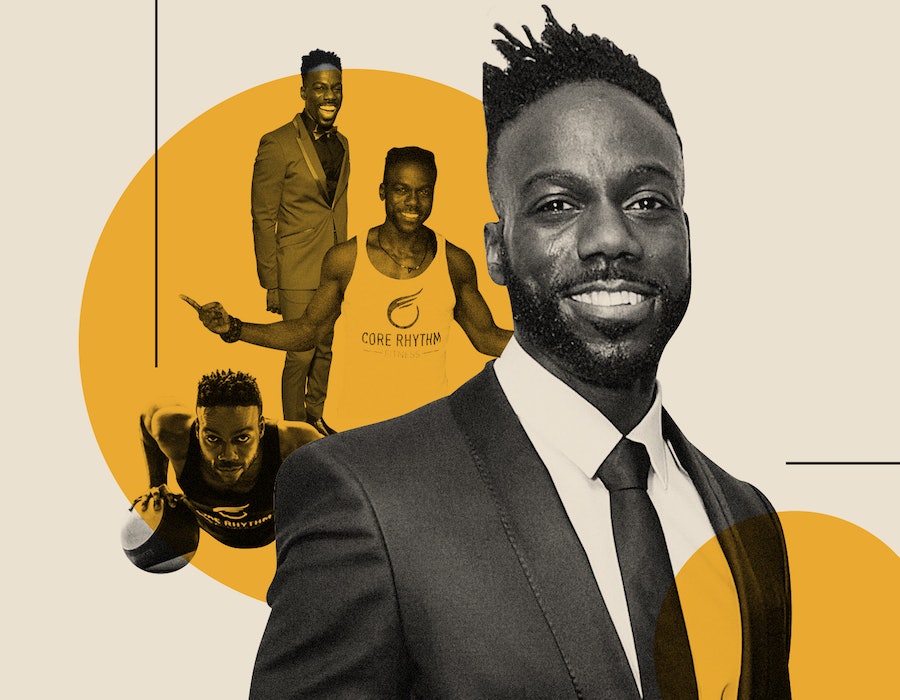 As tens of thousands of people across the country protest police brutality against Black people, the fitness industry is emerging as one of many that needs to be transformed by the Black Lives Matter movement. It's not just the predominantly white areas in which fitness spaces are concentrated — it's also that Black men can't assume they're safe to jog in their neighborhoods, a reality underscored by Ahmaud Arbery's killing in February.

Growing up, I subscribed to the expectations of my born religion, Christianity. Because I'm gay, I believed I was an abomination. My 20s were about building my body, putting on muscle so people would see my muscles, not my gayness.

It took me a long time to accept myself. But about 10 years ago, I began to dive deeper into what the Bible actually says about being gay. I learned, along with my boyfriend at the time, that what we were taught about being gay came from a homophobic, racist perspective rooted in fear. I was then able to slowly come out to my family. I also got into the inner work of healing. I realized that fitness is so much more than building muscle. It's about manifesting what I want to see in the world in my own body — healing myself so I can be a healer in the world, and taking ownership of my pain and turning it into joy.

It can be hard to find that joy when even running outside is dangerous. I lived in West Harlem for seven years, two blocks away from a police precinct. I've had a lot of trauma with police — I was wrongfully arrested at 16, at 23, and then again at 30 — so I had bad anxiety about that. I didn't feel safe running in the neighborhood because of all the cops. Instead, I'd work out on a track in Riverside Park. I feel safer running where I live now because I very rarely see police presence, and I believe it's because my neighborhood has fewer Black people.

In the gym and on the streets, the current movement is about requiring white people to share white privilege, to share equality.

Even though gyms aren't typically full of cops, I need to constantly make calculations about my safety in many fitness spaces, too. Both my husband and I have had altercations with straight white men in the gym. One time, a white man came over and started using a flat bench we had claimed while we were doing core work nearby — even though there was a completely empty, available flat bench next to us. I had to choose between addressing it and letting it slide. My husband had not yet been approved for his green card, so conflict was the last thing I was looking for. Instead of fighting back, I just de-escalated and went to a different exercise.

That general lack of respect happens a lot in the fitness industry. As a gay Black man and fitness business owner, it's like I don't exist in workout classes, magazines, and leading industry conversations. In the gym and on the streets, the current movement is about requiring white people to share white privilege, to share equality. The struggle happens when white people don't want to share space, whether it's a flat bench or the ability to run safely in my neighborhood. But in order to be healthy, everyone needs space to be safe and love themselves. That experience is very connected to the Black Lives Matter movement — it all relates to loving Black bodies and disrupting white entitlement.

In the past, I've hated how I looked, but as I've accepted my Black skin, I've been able to actually change the goals I was working toward. With fitness, you need to focus on the inside first. If you stay consistent and dedicated, you'll probably get your physical results — but if you haven't accepted yourself first, all that work will never feel like it's enough. Especially as a queer Black man, I live in a narrative that I'm never enough, so I use exercise to practice loving my body. To feel like I am enough, just as I am today.

I see a lack of Black people in many gyms because we're not taught to love our Black bodies. That's a crime, because Black bodies are so beautiful, and fitness is therapeutic. Feeling safe in fitness spaces — including running in your neighborhood — shouldn't be a luxury. We should all be entitled to that.

More like this
10 Primal Movement Exercises That'll Improve Your Mobility
By Carolyn Steber
10 Muscles You Work During A Kettlebell Swing
By Carolyn Steber
The Secret To Mastering Crow Pose In Yoga
By Carolyn Steber
Are Those Under-Desk Treadmills Actually Worth It?
By Carolyn Steber
Get Even More From Bustle — Sign Up For The Newsletter
From hair trends to relationship advice, our daily newsletter has everything you need to sound like a person who’s on TikTok, even if you aren’t.