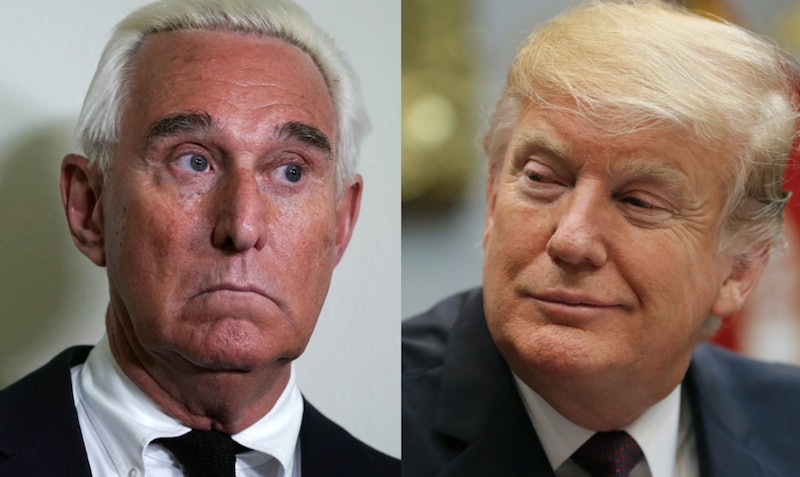 Roger Stone, a longtime adviser to President Donald Trump, was arrested in Florida on Friday and indicted on seven counts in relation to Robert Mueller's ongoing investigation, The Wall Street Journal reported. His arrest marked a significant development for the Russia probe, in part because Stone was such a major figure in the early parts of Trump's 2016 campaign. In fact, Roger Stone's relationship with Trump stretches back four decades and was once tight-knit.

Stone has been a major force in politics for his entire adult life, and he's notorious for owning his mudslinging and often scandalous behavior, even once calling himself a "dirty trickster." He worked on campaigns for decades (for example, those of Richard Nixon and Ronald Reagan) and was also a major lobbyist through a firm he started with Paul Manafort, Trump's former campaign chairman.

Stone's relationship with Trump goes back almost as far: He calls Trump "a 40-year friend." CNN reported that they were introduced in the '80s by Roy Cohn, the infamous attorney who headed Joe McCarthy's legal counsel during the "Red Scare" hearings. In the '80s and '90s Stone acted as a lobbyist for Trump, both for his airline and his casinos. He began suggesting to Trump the idea of running for president as far back as 1988, per CNN. He was even briefly his campaign adviser in 2000 when Trump seriously debated a run, according to The New Yorker.

Their relationship seemed to sour during at least one period, with Trump telling The New Yorker in 2008 that "Roger is a stone-cold loser" who "always tries taking credit for things he never did." It's not clear when they reconciled, but Stone reportedly continued encouraging Trump to run for president — and when he did so in 2015, Stone was one of the main people at his back. Both because of his early work advising that campaign and his decades-long effort to prime Trump for the race, Morgan Pehme — the director of the documentary Get Me Roger Stone — considers him to have been instrumental in Trump's win. Pehme told NPR in 2017, "The person who deserves the most credit is Donald Trump. After Trump, the person who deserves the most credit is Roger."

As for Stone himself, he's declared that he "had no formal role" in the Trump campaign. He told radio broadcaster Grant Stern in 2017: "I was a self-appointed surrogate and I spoke to him on political matters from time to time giving him my own strategic observations. ... We had a certain camaraderie, but I had no formal role."

Stone left the campaign in early August of 2015, just two months after Trump formally declared his candidacy. He insisted that he'd submitted a resignation letter, while Trump declared that he'd fired Stone because he wasn't "serious" enough and was too greedy for his own publicity. But when Trump gave an interview on Alex Jones' show in December of 2015 (Stone helped organize the appearance), he seemed to dismiss having any ill will towards his former adviser: "Roger's a good guy and he is a patriot," Trump said. "He's been so loyal and so helpful."

Stone continued working to elect Trump as a private citizen with no official ties to the campaign after he left. He started a political organization called "Stop the Steal" that corralled pro-Trump activists into putting pressure on the Republican Party to nominate Trump in 2016. He also admitted to CNN that he was keeping up communication with the candidate. One source told the network, "Roger is never too far away from Trump," and another said, "Roger and Trump always wind up finding their way back to each other."

The New York Times reported in November that Stone reached out to Trump campaign officials in 2016 to offer his services as a WikiLeaks conduit who could provide information about leaks that were going to drop. It is not clear, the paper noted, whether or not Stone actually had insider access to WikiLeaks or whether he just wanted the campaign to believe he did (he told the Times he was just speculating and "bluff[ing]" about what WikiLeaks might do; WikiLeaks has said it has never been in contact with Stone). Stone's potential connection to WikiLeaks is one focus of Mueller's investigation.

Stone maintained some contact with Trump after he assumed the presidency, according to his own admission. Several outlets reported that Stone was one of those who advised Trump to fire James Comey, though both Stone and the president denied it.

There's a lot we still don't know about Stone's actions during Trump's campaign for president and any advisory role he may have maintained afterwards. Mueller's investigation may bring more clarity before it's concluded. But for now, what's undeniable is that the two men have been heavily involved in each other's lives for decades: As Maggie Haberman reported in The New York Times in 2017, "Few people go as far back with Mr. Trump as Mr. Stone."