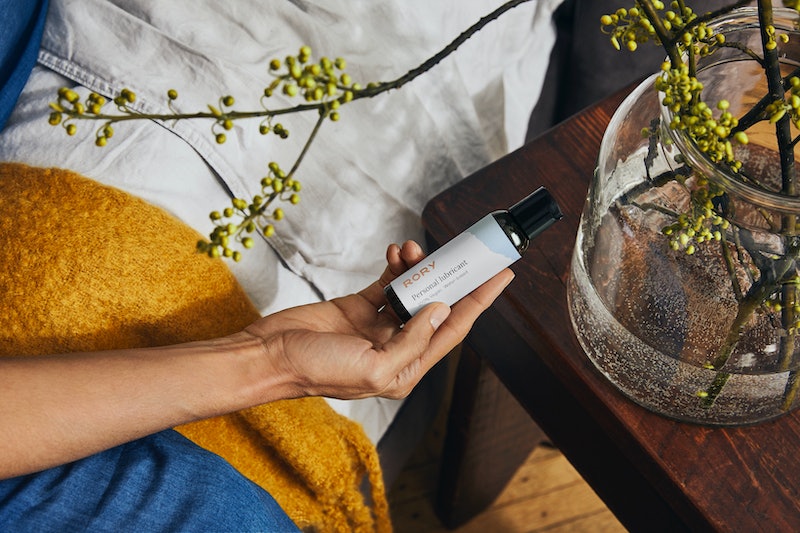 As a society, we talk about childbirth and child-rearing, and we're making strides towards talking about puberty. But the other major hormonal shift that happens in the lives of people with uteruses — menopause — is rarely, if ever, talked about. But a new company, Rory, is out to change that.

Rory is a new branch of the company Ro (formerly called Roman), a telemedicine company that helps people with penises cope with erectile disfunction. Rory offers a combination of support and product services to help address some of the major symptoms of perimenopause and menopause: hot flashes, vaginal dryness, sleep, and thinning eyelashes. On the community side of things, Rory offers space for people in perimenopause to connect with each other and with professionals in order to address their symptoms and commiserate. And this — an online connection with health care professionals and a supportive online community — they argue, is what the future of menopause care should look like.

Rory was founded in late 2018, after Rachel Blank, a former venture capitalist turned co-founder of Rory, heard Zachariah Reitano, the founder of Ro, pitch his company to the investment firm she worked for. Listening to his story — which touched on the difficulties of navigating the medical system as a young man with ED — made Blank think of her own experience navigating a PCOS diagnosis when she was younger. That, combined with her experience growing up with a gynecologist father, led to what she tells Bustle was an “Aha!” moment. She realized there was a big opportunity — and a big need — for a company to come in and serve people going through the phases of menopause.

“There are nearly 40 million women between the ages of 45 and 65 right now,” Blank tells Bustle. “So all of them have just gone through, are about to go through, or have gone through perimenopause and menopause. And when you talk to them, they start saying all of the things that I felt: ‘I feel so alone; I was not prepared at all; I thought I was pregnant because I was skipping periods.’ They just didn’t know what menopause was.”

What most people refer to as "menopause" is actually perimenopause, which starts for most people with uteruses in their 40s but can start as early as mid-30s for some. Menopause is when the menstrual cycle stops completely and permanently, and in the United States, that happens on average at age 52. The hormonal changes that lead up to that point — which for many people includes symptoms like hot flashes, mood swings, lack of interest in sex, vaginal dryness, eyelash thinning, and more — is called perimenopause.

Women going through perimenopause and menopause often describe feeling "invisible." While young moms and grandmas may be represented in media, this middle age is often left out of the picture. And it's precisely this feeling of invisibility during such a tricky time that leads to the need for support that Rory is hoping to provide.

Rory offers community support in the form of a private Facebook community, prescription medications for hot flashes, melatonin for sleep, lube for vaginal dryness, and Latisse for eyelash growth. The process starts with an online form outlining the patient’s medical history, symptoms, and lifestyle. Once it’s reviewed by the Ro medical team, the patient gets a followup call, message, or video call. They determine which — if any — medication is appropriate and that medication is delivered in discreet packaging to the patient’s door.

Telemedicine is a new and fast-growing industry — and it’s not without controversy. Given that the most well-known form of “telemedicine” being the 30-second “appointments” patients have with doctors in order to get a medical marijuana prescription in California, Rory’s Clinical Director Dr. Melynda Barnes understands why people may be skeptical of Rory’s approach. She says, however, that their goal is to be “the gold standard of telemedicine.” To that end, they only offer treatments that have “some level of science behind them,” don’t prescribe habit-forming drugs, and won’t prescribe their vaginal dryness medication or their hot flash medication at all if the patient hasn’t been to an in-person doctor in the past two years.

“Rory is not a replacement for in-person doctor visits,” Dr. Barnes tells Bustle. “It’s a complement to help women safely and easily seek help for bothersome menopausal symptoms outside of their interactions with their primary care physician.”

Additionally, Blank says, people now have very little time with their doctors. In some healthcare facilities, appointments are scheduled in 15-minute blocks. And, for many patients, that’s really not enough time to get to the more sensitive symptoms of menopause. What's the likelihood that a woman experiencing vaginal dryness, who may be embarrassed, is going to bring it up in the last two minutes of an appointment?

Another controversial issue with telemedicine companies is how they choose to advertise. While there are strict rules around TV and print advertising of medications, the FDA hasn't quite caught up with age of social media. It's not uncommon to see ads on Instagram for prescription drugs that look like ads for makeup. And while Rory also advertises on Instagram and Facebook, Dr. Barnes says that not only do all of their ads go through a strict medical review, but they’re written “by women, for women.”

“It can be kind of a sensitive topic and sometimes men don’t have the right way of speaking about it or don’t understand what’s really important or they can say things that feel demeaning or patronizing,” Dr. Barnes says. “One point of view we have is it’s women to speaking to women, but the other one is that it’s medically appropriate and the FDA regulations are navigated.”

Our current medical system is… not great. Some might even say it’s broken. But as we move through different stages of life, it’s innovative ideas like Rory — run by smart, empathetic women like Dr. Barnes and Rachel Blank — that give us hope that things can actually change.

Correction: A previous version of this story misspelled Zachariah Reitano's name. The story has been updated to fix it.