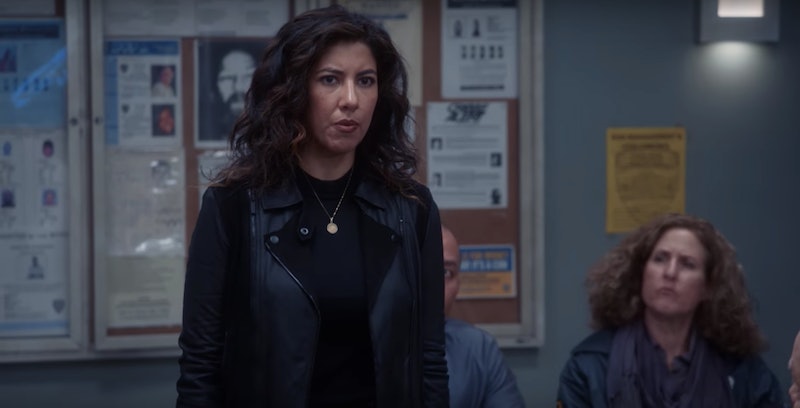 Rosa Diaz has long been defined by her tough, guarded exterior, so it makes sense that when Rosa comes out as bi on Brooklyn Nine-Nine, she applies the same no-nonsense candor. "I'm a private person so this is pretty hard for me, but here we go. I'm bisexual," she says bluntly in a clip for the show's 100th episode, streaming exclusively below. And then, just as swiftly: "All right, I will now field one minute and zero seconds of questions pertaining to this. Go."

Rosa's announcement comes in response to last week's reveal that she's bi, which she confirmed to Charles (Joe Lo Truglio) after he heard a woman call her "babe" on the phone and kept pressing her for information. She initially rebuffed his enthusiastic response, but eventually softened — at least, by Rosa's terms — and explained she simply didn't think it was anyone's business and didn't want anything to change. Here, she explains that she also didn't think Charles could keep a secret, which is why she now finds herself divulging personal information to her co-workers, something that, in the past, she has generally tried to avoid.

But despite being a little out of her comfort zone, Rosa is as true to form as ever, and for Brooklyn Nine-Nine star Stephanie Beatriz, that was especially important. Beatriz, who plays Rosa, came out as bi in a similarly nonchalant way last year. "Yup," she wrote plainly alongside a retweet of a quote from an interview Aubrey Plaza gave to The Advocate which read, "I fall in love with girls and guys. I can’t help it." When a follower asked Beatriz to elaborate, she replied by saying, "Yes y'all" with two emojis: one of a man and woman kissing, and the other of two women kissing. “I was so excited about it because as somebody who identifies as bi — queer — I just had nothing like that when I was growing up," Beatriz told Variety of getting to tell Rosa's story. She continued:

"The gay characters I can remember were most often stereotypes. Even a show like Friends, you watch back, and you’re like, ‘Ooh, I can’t believe that’s the choice they made.’ And as someone who’s bi, you have absolutely nothing — no representation at all. And to be able to try to do something like that on our show and have a character come out as bi was really important for me.”

That's especially true for bi characters. On television, they're often either oversexualized or quickly forgotten, like when Bachelor In Paradise turned Jaimi's sexuality into a spectacle, or when Alex (Olivia Wilde) began dating Melissa (Mischa Barton) on The O.C., was made out to be a jealous, possessive ex, and promptly faded into the background. There are, of course, exceptions to the rule (looking at you, Crazy Ex Girlfriend), but they're few and far between, and Brooklyn Nine-Nine lends needed perspective to bisexual representation on TV. As a bisexual character who's neither hyper-feminine or overtly masculine, Rosa transcends outdated tropes, and as a main cast member, she already has — and will continue to — stick around long enough for viewers to get to know who she is beyond how she identifies.

Also of note? Brooklyn Nine-Nine's writers actively sought out Beatriz's insight when developing the story line. "That was really meaningful and special to me that they weren’t just saying, 'We want to tell the story and let’s go tell it,'" she told Entertainment Weekly. "[It was] 'No, let’s find someone who’s bi. Oh, guess what? The actress who comes out as bi also happens to be bi. Let’s talk to her about her own experience and bring this into reality.”

So, Rosa coming out to her co-workers hits on two fronts: It's authentic to her character, but it's also authentic to real-life. It's refreshing to see more of that on television.