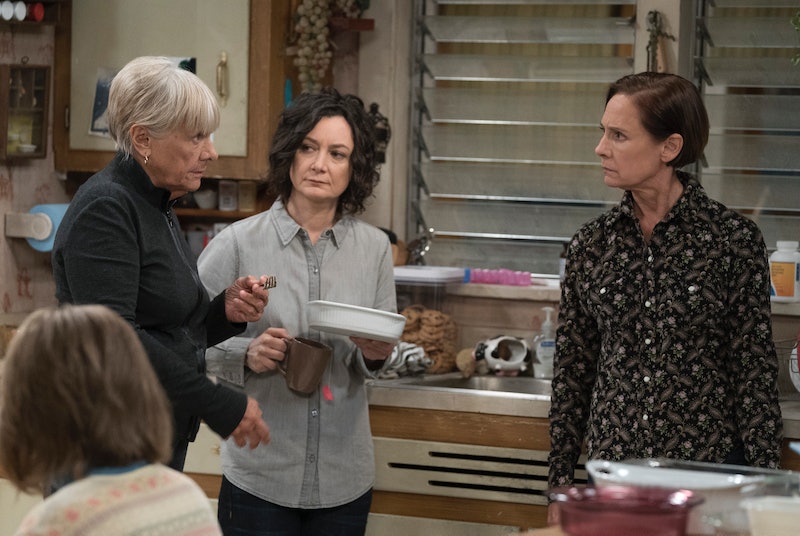 A lot has changed since the first season of the Roseanne reboot ended last spring. After Roseanne Barr's offensive tweet about former president Barack Obama's advisor, Valerie Jarrett, resulted in the show's cancellation, it's back without her — rebranded as a spinoff called The Conners, which premiered on Tuesday night. And now that Roseanne's fate in The Conners has been revealed, it's clear that the show will continue to tackle the same difficult issues that the reboot did. Without Roseanne (the actor and the character), though, the way it does so will be quite different.

In the first episode, the show wasted no time answering the question that fans have had all summer long: How did Roseanne die? Last season, Roseanne struggled with an opioid addiction, and that's exactly what led to her death. According to Crystal, she was found dead in her bed, presumably after having a heart attack, but when the autopsy result came back, it revealed it had actually been an overdose.

The medication wasn't prescribed to Roseanne. Instead, she got it from a neighbor named Marcy, who swore that she only gave Roseanne the pills because she thought she needed them to get back to work.

Much of the episode explores how the family is (or isn't) coping after Roseanne's death, which makes sense, since the show picks up only three weeks after it happened. Each character reacted to it in a way that's pretty true to who they are: Jackie stepped in to help run the house (and went a little overboard cleaning and organizing), Darlene remained the comic relief and made sure the bills were paid, and D.J.'s wife Geena, who is in the military, returned from duty to lend an extra hand.

What was most painful to see was the way Dan reacted. He struggled with grief to the point that he put a huge note on Marcy's car threatening her for giving Roseanne the pills. But by the end of the episode, he became the center of the family the way Roseanne was, and even though his future looked rocky at first, he and the rest of the Conners managed to get to the tearful catharsis that seemed to be coming all episode long.

Because of the real-life consequences of Barr's actions, the show was forced to tackle difficult subject matter right from the start: the death of the family's matriarch, and one that happened because of an issue that affects a lot of real people. But even so, it still managed to be funny, and overall, The Conners is much easier to digest without the constant stream of Trump references coming out of Roseanne's mouth.

The Conners is definitely a different show without Roseanne, but it seems to have the same relatable humor at heart. It's hard to embrace a spinoff after the problematic events that got Roseanne axed in the first place, but this episode proves that it might be worth sticking around to give the Conners a second chance.