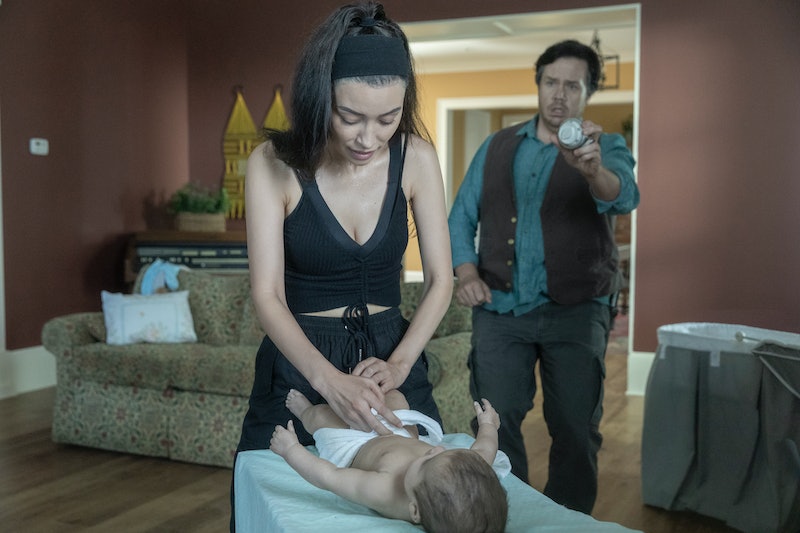 Spoilers ahead for The Walking Dead Season 10. As if battling walkers and Whisperers wasn't enough, Rosita has also had to put up with Eugene, who is desperately in love with her. On the Oct. 20 episode of The Walking Dead, Rosita "broke up" with Eugene and also casually dismantled the problematic concept of the "friendzone." Even though Rosita rejected Eugene for good, the scientist finally realized that his romantic feelings were not reciprocated, but also that his side of their friendship was conditional and transactional. Basically, he realized he was being kind of a jerk.

Eugene has had feelings for Rosita for a long time. The characters actually get married in The Walking Dead comics, but on the AMC series Rosita does not return Eugene's affections at all. She has been in romantic and sexual relationships with Abraham, Spencer Monroe, Father Gabriel, and Siddiq over the years, making it clear to everyone except Eugene that she's not into him. In Season 10, he keeps trying to insert himself as her partner, even when it comes to the care and keeping of Rosita and Siddiq's daughter. At the end of Sunday's episode, Rosita broke.

"You and I are never going to happen," she says to Eugene, so admittedly tired that her words were a little harsher than usual. "You are not Coco's father. We are not together. I need you to hear that." Eugene knows that the truth will out when you're exhausted, and therefore miraculously actually listening to her.

To be perfectly clear: it is unfair that Rosita has had to tell Eugene that she was not romantically interested in him multiple times, and it is extremely frustrating that it took some research he heard about sleep deprivation for him to believe her instead of taking her at her word the first time. In the real world, the way that our society teaches men that they are entitled to romantic and/or sexual relationships with women, and demonizes "friendzoning" as a cruel act, leads to misogynistic memes at best and violence against women at worst. It may not seem like a big deal that Eugene couldn't take a hint, but this is a serious issue.

Another (albeit less harmful) problem with the concept of the "friendzone" is that it devalues platonic relationship in favor of sex and romance. We see this laid out plainly on The Walking Dead when Eugene says that he now understands that there is "nothing" between them. Rosita calls him out. "You think our friendship is nothing?," she asks.

Eugene ultimately has the right reaction, even if it took him too long. Unlike the worst perpetrators of the "friendzone" myth, he's not blaming Rosita for not reciprocating his feelings, and is therefore sympathetic in the scene. "Our whole friendship is premised on my mistaken belief that perhaps some day I could change your mind," Eugene says. "That you would see I was worthy enough of being re-zoned into 'Love Town.' What kind of friend is that?"

Admitting that your friendship with someone has not been 100% genuine is really hard to do. It is heartbreaking in its own way, but thankfully the Walking Dead deftly put an end to this frustratingstoryline between Rosita and Eugene, they turned it into a teaching moment. If more fictional characters and people in real life handled rejection like this, especially men, the world might be a better place.