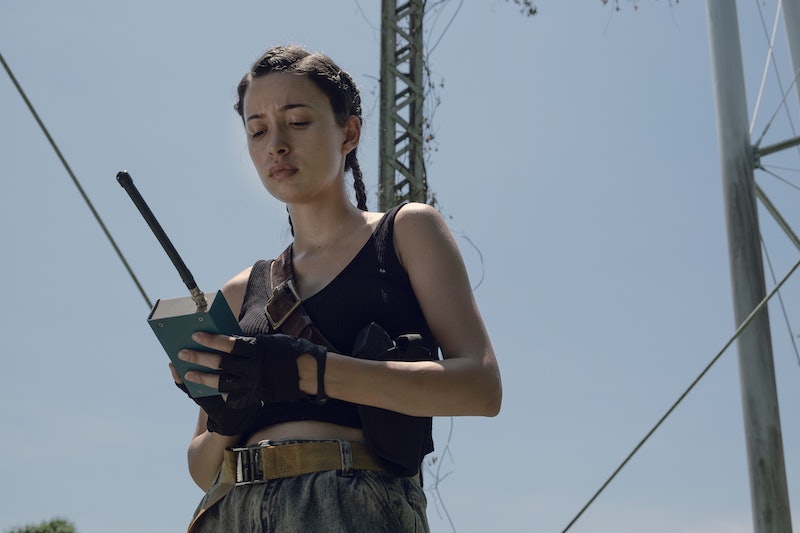 What in the world is going on with Rosita? The rest of her comrades are dealing with Whisperer woes, scare resources, and inner conflicts while Rosita is in her own world filled with Maury drama. She’s pregnant by Siddiq, in love with Gabriel, the object of Eugene’s undying love, and mostly oblivious to what's going on with Alpha and the gang. She was one of the first people in the group to encounter the Whisperers but she hasn't done much in Season 9B. There’s also no signs that she will play a major role in the Whisperer war, so many TV fans are wondering what happens to Rosita in the comics. Her ultimate fate is not for the faint of heart.

At this point in the comics, Rosita is pregnant by Siddiq after cheating on Eugene, per Comicbook.com. She tells Eugene the truth and he decides to stay with her and raise the child as his own. They go to the infamous fair together to shop for baby clothing, but Rosita is abducted by Alpha, beheaded, and later has her reanimated head stuck on a pike. Rosita’s head is lined up alongside other pikes with Ezekiel, Tammy Rose, and several other characters.

Her death in the comics was especially sad because her unborn child died as well. It’s an iconic and grisly scene from the comics that is quickly approaching on the TV show. Last week’s episode mentioned that the fair was only a couple of days away so this horrifying massacre will take place before the season finale. And, it’s likely that TV Rosita will get her comic book death.

The show often deviates from its source material, but they have stuck with a couple of classic moments including Glenn’s death by bat with Negan. So, there's a chance they will do the same with Rosita and make her a part of the unlucky lineup.

Her death would have a major impact on Eugene, who has been with her longer than anyone else, as well as Gabriel and Siddiq, who are currently advocating to go to the ill-fated fair against Michonne's wishes. There's also a chance that one of them could end up with the same unfortunate ending.

Rosita's character has been relatively stagnant for a while so the writers may kill her off to increase space for newer characters like Magna, Connie, Kelly, and Yumiko. And, the pike scene has to feature characters that fans have a long-term attachment to (like Rosita) so they can feel some emotional weight.

But, the show could always go the other way and keep her alive. Perhaps they will switch it up and take out Tara or Father Gabriel instead to throw fans off. She could step up into a more prominent role at Alexandria, especially after Michonne leaves in Season 10. It would be interesting to finally give Rosita a solid story as she balances leadership and motherhood in her own unique way as she mends the community following the Whisperer war. One thing is for sure - somebody out of Rosita's weird love triangle won't make it into Season 10.

Here's to hoping that you somehow make it out alive, Rosita.