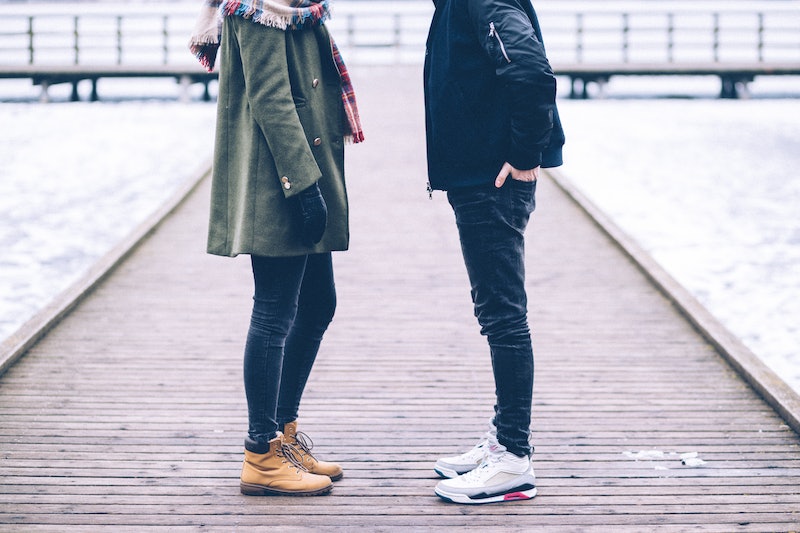 If you have a TV or the internet or perhaps a toxic friendship of your own, you’ve likely heard about the “friend zone.” On the surface, it refers to something almost all of us have felt at some point: Unrequited affection. However, the concept of the “friend zone” is problematic as it branches into some complicated social biases, and it's high time we stopped telling young people it exists.

The term “friend zone” is thought to have been coined in a 1994 episode of Friends, but you don’t have to look hard to find the idea, even if not by name, constantly perpetuated in most sitcoms and rom-coms and general media portrayals of men and women. The "friend zone" has fallen time and time again under the heading of "Things I’ve Had Mansplained To Me." It's just one of the many complicated ways we’re taught to view relationships between men and women: Men and women “can’t be friends.” Men and women “can’t eat dinner alone together.” It's worth noting that the phrase “men and women can’t be friends” is often shorthand for “men and women can’t be friends because one of them is going to want to ~*get freaky*~ with the other and that ruins everything.”

And here's the thing: The insidious ideas that the “friend zone” both stems from and perpetuate are especially harmful to young people exploring and examining their own relationships. Instead of giving teens a healthy vocabulary in order to better communicate in relationships and about relationships, phrases like the “friend zone” imply entitlement, excuse sexism and heteronormativity, ultimately doing more harm than help.

The Idea Of The "Friend Zone" Further Complicates Ideas About Consent

As a culture, we are still distressingly unclear about what is and what is not consent. A recent study from the National Sexual Violence Resource center found that men, particularly young men, are less likely to categorize some non-consensual acts as sexual assault. The study found that fewer men than women view things like coerced sex as assault (67 percent of men versus 79 percent of women). Additionally, young adults are less likely than older adults to say sexual assault includes things like verbal harassment. (46 percent of young adults versus 54 percent of older adults).

The “friend zone” insinuates that sex and relationships are transactional. It implies that if you do a certain number of nice favors or just believe yourself to be good, kind person, you are owed something in return. But let’s be very clear about this: Nothing entitles you to sex. Nothing entitles you to a relationship. Good deeds are not redeemable tokens, and human beings are not prizes to be won. The only thing that means someone is going to have sex with you is if they are currently and enthusiastically saying, “I agree we are going have sex!”

The mentality that certain things make you “more deserving” of sex and romantic relationships perpetuates rape culture. At an age where young people are starting to explore and understand sexual relationships and sexuality as a whole, the “friend zone” is damaging to their ideas about consent.

The “friend zone” is, to put it lightly, aggressively straight. It’s commonly, if not almost exclusively, used to talk about a man and a woman who are in a platonic friendship. The “friend zone” assumes that both parties involved (presumed to be a cisgender man and a cisgender woman) have the capacity to be sexually attracted to one another’s gender.

You might want to sit down for this earth-shattering revelation: Not all men are attracted to women. Not all women are attracted men. The whole world does not identify as straight, or with the gender binary. In fact, a 2016 report on the upcoming generation found only 48 percent of 13- to 20-year-olds identify as exclusively heterosexual. That’s a significant shift in comparison to the 65 percent of Millennials aged 21 to 34 who say the same. The way young adults think about their own sexuality is evolving, and the way we talk about sexuality and sexual relationships as a whole needs to evolve with it.

When we look at conversations about who is putting who in the “friend zone,” it is typically (again, if not almost exclusively) a man being “friend zoned” by a woman. From TV and movies to books to candid photos of actual people, men “doing boyfriend-y things” for women who seem to not be seeking a romantic relationship are thought to exemplify the “friend zone.”

As this piece from Everyday Feminism puts it, “Why are [women] shamed for their desire to remain friends while the other person’s desire to pursue a relationship generates empathy?” What if the conversation were reversed? What if instead of men being “friend zoned,” women are the ones who are “girlfriend zoned”?

By saying that women “put” men in the friend zone, our language implicates women: The “friend zone” is something women do to men. Arguably, seeing a female friend only as a potential girlfriend and having expectations that a relationship should necessarily become something romantic is something men “put” on women. Is it not equally, if not more, possible that being “put” in the friend zone is something you do to yourself?

Unrequited love — and like, and lust, and everything in between — existed long before anyone started calling it the “friend zone.” I don’t think anyone would argue against the fact that that feeling is one of the worst; but,while it may seem like it’s arguing semantics, the phrase “friend zone” is worth examining. Especially when it comes to things that involve consent and romantic relationships, words matter. Deconstructing the way we talk about things like friendships and romantic relationships is crucial to working towards a future that is more inclusive.

When you realize someone doesn’t like you “that way,” by all means, get in your feelings. Cry it out and be bummed for a bit. But also remember that there are many things worse than wanting to be “just friends.” Like, say, someone implying they were only nice to you because they thought it’d make you want to have sex with them. So, next time someone’s looking for ways to get out of the “friend zone,” maybe start by asking why they put themselves there in the first place.

More like this
How Do I Deal With Both ED & Premature Ejaculation?
By Sophia Benoit
Are Quality Time & Physical Touch Love Languages Compatible?
By Lexi Inks
I Never Orgasm During Sex. What Can I Do?
By Sophia Benoit
Is It A Rebound Relationship Or The Real Thing?
By Carolyn Steber and Lexi Inks
Get Even More From Bustle — Sign Up For The Newsletter