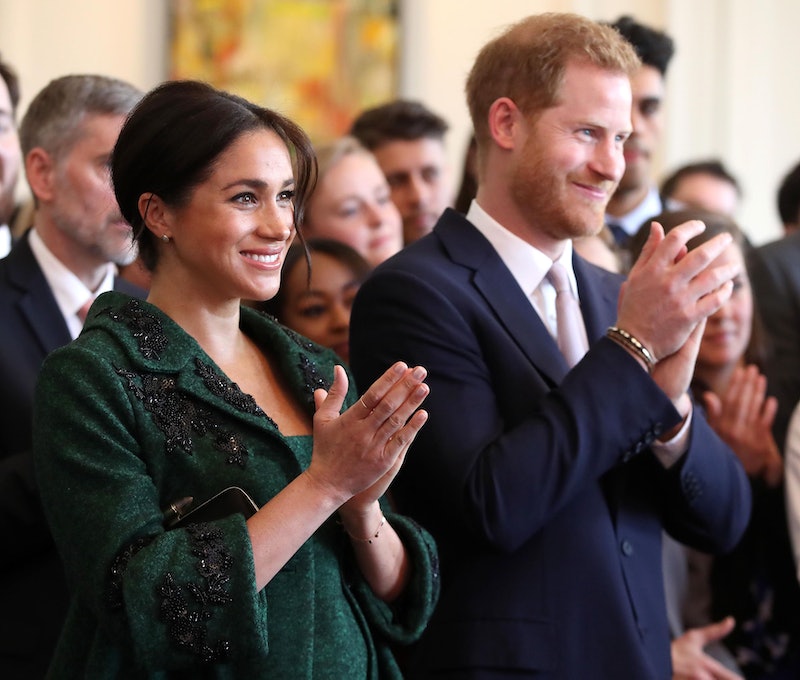 Despite what you may have heard, details about the Duke and Duchess of Sussex's baby are still under wraps. According to E! News, Buckingham Palace clarified a rumor about Meghan Markle and Prince Harry's baby name, effectively shutting down claims that Baby Sussex's name was already (accidentally) revealed.

Recently, some royal watchers wondered whether the royal family's official website revealed whether Markle and Harry are having a boy or girl and, additionally, whether they shared some potential baby names. As E! News reported, if you search on royal.uk for some of widely suspected names for the little one, such as for "/prince-alexander," /prince-james", or "/prince-arthur," the URL or those names directs back to the main page of the site, which suggests that those pages are set up but not live yet. In other words, those links could have ben set up for Markle and Harry's little Prince James or Arthur, as the rest of the family has their own pages on the site.

Before you get excited over these possible baby names (and, subsequently, a possible gender reveal), Buckingham Palace has clarified that these URL searches are not what they appear to be. "A large number of search term redirects were set up some time ago on royal.uk," Buckingham Palace told E! News, "This was in order to improve user experience." While Alexander, Arthur, and James could still on the baby name shortlist, rest assured that Buckingham Palace didn't just blow the lid off of Markle and Harry's Baby Sussex announcement.

According to Yahoo! UK, a similar situation happened with Kate Middleton and Prince William in advance of the birth of their third child. The publication detailed that the royal family's website had a page for "Prince Albert," that was discovered shortly after the couple welcomed their child. Of course, it turned out to be another "term redirect" and the Duke and Duchess of Cambridge later announced that they had named their son Prince Louis.

Markle and Harry have not revealed any specific details about their little one. In fact, they're going a very private route when it comes to their child. Unlike Middleton, who appeared publicly shortly after giving birth to each of her three children, Markle will not be posing for photos after delivering her baby. Instead, as People reported, after the couple enjoys some privacy with their baby, the family will then pose for a photo and answer some questions for one lucky reporter who will be present for the photoshoot. In a statement from Buckingham Palace (obtained via People), they also detailed:

An announcement about the Duke and Duchess of Sussex's bundle of joy could come at any moment now, especially since it was reported that their child would arrive sometime in late April or early May. Until the couple (or Buckingham Palace) offers up that announcement, royal watchers will simply have to wait patiently for anymore Baby Sussex updates.