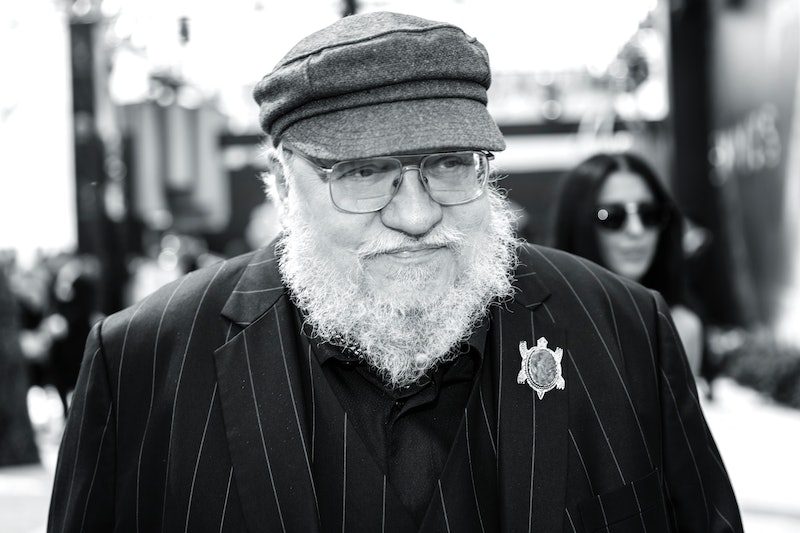 With just one episode left in Game of Thrones's run on HBO, A Song of Ice and Fire fans will be without new fandom material from May 19, 2019 until The Winds of Winter comes out. Has George R.R. Martin already written the last Game of Thrones books? A Game of Thrones actor recently suggested that the ASOIAF author was keeping the last two novels under-wraps until the end of HBO's TV adaptation, but Martin slammed the rumor as "absurd" in a Monday post to his blog.

A Song of Ice and Fire fans have been waiting on The Winds of Winter, the sixth book in Martin's epic fantasy series, since the publication of A Feast for Crows in 2011. By and large, HBO's Game of Thrones has been there to fill the void. The series surpassed the events of the books when its fifth season concluded in 2015, however, leaving fans incapable of knowing just how faithful — or not — David Benioff and D.B. Weiss's adaptation was holding to Martin's source material. ASOIAF readers have, understandably, spent the last several years champing at the bit for The Winds of Winter.

Enter Ian McElhinney. The actor who portrayed Barristan Selmy in several seasons of Game of Thrones attended Epic Con 2019 in St. Petersburg, Russia as a guest, where he made some interesting statements regarding Martin's progress on the series: "What I've been told is that George has already written books six and seven.... But he struck an agreement with... the showrunners of the series, that he would not publish the final two books until the series has completed."

Video footage of McElhinney's statement hit YouTube as early as April 29, but the story began to pick up steam on Monday, when a Redditor using a since-deleted account posted a link to the video to the r/gameofthrones subreddit. It's a rumor that Martin fiercely denies.

In a Monday blog post that did not name the rumor-spreading actor, Martin denounced "Internet journalists" as "purveyors of misinformation" — thanks, George — for reporting on McElhinney's Epic Con statement. "It seems absurd to me that I need to state this," Martin wrote. "It boggles me that anyone would believe this story, even for an instant.... Why would I sit for years on completed novels? Why would my publishers — not just here in the US, but all around the world — ever consent to this? They make millions and millions of dollars every time a new Ice & Fire book comes out, as do I. Delaying makes no sense. Why would HBO want the books delayed? The books help create interest in the show, just as the show creates interest in the books." Martin concluded by reminding his readers, "don't believe everything you read on the internet," adding: "Except here, of course."

The Winds of Winter is not done. A Dream of Spring has not been started. And Game of Thrones ends May 19, leaving fans without ASOIAF material until Martin publishes his next book.