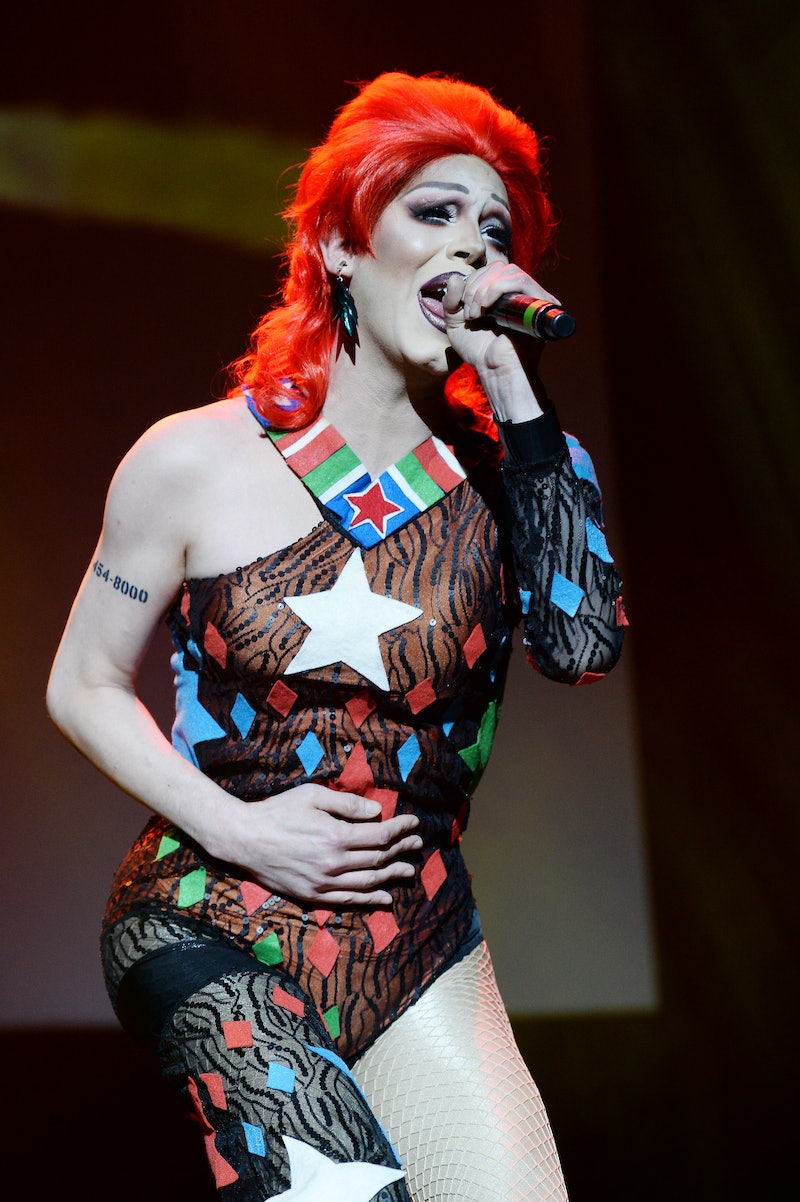 Sharon Needles aka Pittsburgh native Aaron Coady turned heads on series four of RuPaul's Drag Race when she churned out some bloody gruesome looks. They opened up the possibilities of what drag could be — namely, punk, gory, and gothic – and Sharon's since become the unofficial queen of halloween. As a spookster, you'd expect that Needles has some fairly shady fans, but some of them are just on a whole other level. Proof of that came when RuPaul's Drag Race's Sharon Needles discussed her fan encounters, and well, some of them are straight up strange.

"The weirdest fan gift I’ve ever received is when I was in Brazil and someone slit their wrists in front of me," Needles told Digital Spy exclusively on Dec. 26. I think the definition of "gift" might be a little loose there. Fans might have been influenced by the iconic look from the first runway of series four, which saw blood spilling out of Needles' mouth while sporting post-apocalyptic couture. "A lot of fans like to let blood come out of their mouth when they have pictures with me so they put the blood in their mouth and let it fall down," Needles said.

While some fans use fake blood, like the capsules Needles employed for her first runway challenge, the more extra ones prefer the real deal. "In Brazil they prefer the real thing, I’ve been given a lot of vials of real blood," Needles confirmed. What do you even do when you're given a vial of someone's actual blood? Well, in classic Needles style, they're apparently kept all around the house.

"My house is a mixture of mid-century Brady Bunch and the Addams Family, so it’s not uncommon to find vials of blood in my house," Needles revealed, quite worryingly.

All of the above stays true to Needles' catchphrase — "When in doubt, freak 'em out" — which she has apparently seen "tattooed on over 500 people in some very inappropriate places on their bodies." If the parts are where I'm imagining, I'm thinking that if freaking people out is your thing, that is quite an appropriate place to get the tattoo.

Needles also revealed to The Villager on Oct. 18 that as well as bodily fluids, she's been given "a lot of dead animals. I get a lot of taxidermied rats and birds, which of course I love." Of course. Crochets of her cat "who has been dead for three years," also seems to be a popular gift of choice for fans. If you'd like to give a gift yourself — please, no real blood, that is legit worrying — then you can see Needles at any of the several dates across the UK in April for the Drag Race girls' Werq The World Tour.

They're hitting up Birmingham, London, Manchester, Belfast, Sunderland, Glasgow, Edinburgh, and Cardiff, with the blurb for the event explaining that "the all-new production follows a team of intergalactic queens including Aquaria, Asia O'Hara, Kameron Michaels, Michelle Visage, Naomi Smalls, Kim Chi, Monét X Change and Violet Chachki on their mission to the sun to save our solar system from a dark entity intent on harnessing its power."