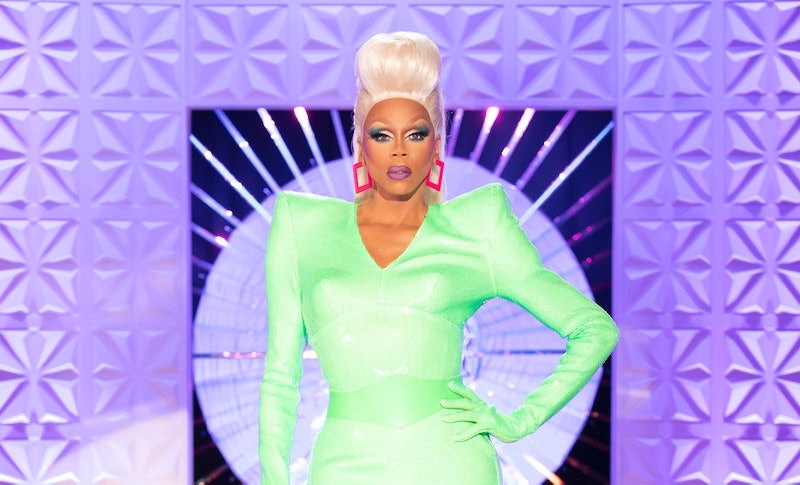 Since Mama Ru and BBC Three announced that RuPaul’s Drag Race would be coming to the UK it feels like the countdown has been on to see whether the sassiness and sashays would translate over the Atlantic. As the series starts on Oct. 3 2019, there isn’t long before Michelle Visage, Alan Carr, and RuPaul light up our screens with big hair, outrageous dresses, and serious critiques. However, if you really can’t wait until then, you’re in luck. RuPaul's first Drag Race look has been revealed on the runway and believe me, it’s everything you wanted and more. If more teaser clips are going to continue coming out I don’t think I’m going to be able to wait until Oct. 3.

Fans of RuPaul’s Drag Race have been waiting in eager anticipation for any hints and teasers of what the the truly iconic show is going to look like in the UK. The wait might be over as, on Aug. 22, the show's official account dropped a video on its twitter of the first episode and Ru is serving a serious lewk.

With the fiercest shoulder pads, and matching gloves and shoes, Mama Ru made her first appearance of the series in a neon green form-fitting dress and yass gawd it’s got to be said, she’s never looked better.

If you thought you were excited for the series it’s nothing on what Mama Ru is feeling. In a statement she said, “I am beyond excited to celebrate the massive charisma, uniqueness, nerve and talent of the Queen’s queens. And before anyone asks, yes, we would be thrilled to have Meghan Markle join us, as we are already preparing a ‘Royal-Mother-To-Be’ runway challenge.”

Alongside revealing her killer first lewk the teaser trailer also unveiled the runway, first theme, and first guest judge. If you tune in on Oct. 3, you can expect to see the ten fresh-faced UK queens battling it out with two royals looks. Only one queen can be crowned the Queen though. The first guest of the judge is super dreamy Andrew Garfield who is more than thankful to Mama Ru for bringing him to what he calls "gay heaven." I agree, that meeting Mama Ru’s would be a heavenly experience.

The 10 UK queens have been announced and this autumn you'll be watching Baga Chipz, Blu Hydrangea, Crystal, Cheryl Hole, Divina De Campo, Gothy Kendoll, Sum Ting Wong, Scaredy Kat, The Vivienne, and last but certainly not least Vinegar Strokes strut their stuff. I can’t wait to see them sashay across the runway for the first time. While her critique is often scathing, Mama Ru had some pretty sweet words of encouragement for the new queens. In a statement she said, “each of the UK queens is so unique, so courageous and so special. I can't wait for the UK — and the world — to fall in love with them the same way I did.” There’s no doubt in my mind that the UK will be hooked.

If the teaser clip of the first episode of RuPaul’s Drag Race UK has made you hungry for more, you can tune into BBC Three on iPlayer on Oct. 3 to watch the real thing. Now Mama Ru is in the home country of the Queen you can expect things to get a whole lot more outrageous and fabulous.

More like this
Twitter Is Saying The Same Thing About 'Love Island'
By Sophie McEvoy
Twitter Has Renamed Ekin-Su After *That* 'Dancing On Ice' Performance
By Sophie McEvoy
'Love Island' Has Added Yet Another Bombshell To The Villa
By Bustle UK
Joey Essex Is Rumoured To Be Dating A 'Love Island' Favourite
By Sam Ramsden
Get The Very Best Of Bustle/UK
Sign up for Bustle UK's twice-weekly newsletter, featuring the latest must-watch TV, moving personal stories, and expert advice on the hottest viral buys.