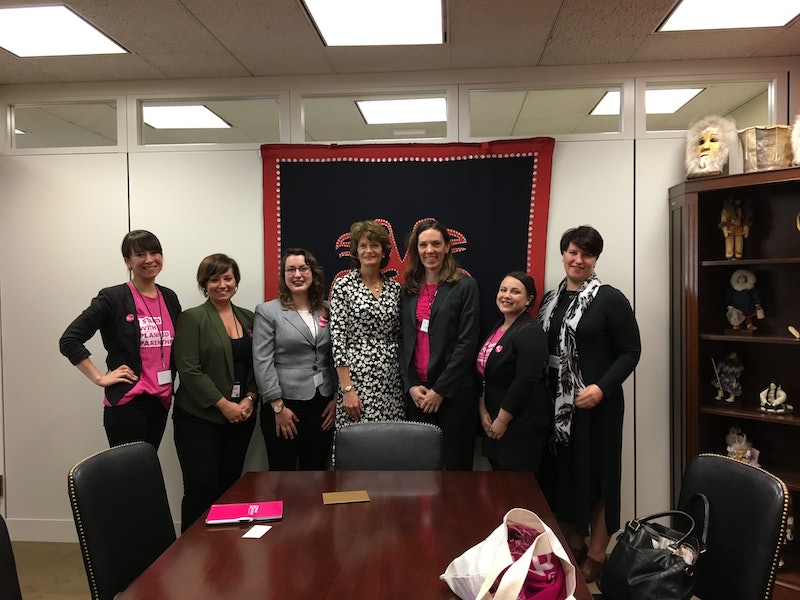 "How did a small-town girl from Eagle River, Alaska, become a writer, editor, and advocate living in New York City?"

The question was a fair one — the idea that those born and raised in Alaska rarely leave Alaska is an over-played joke, but one with more than a grain of truth to it. Still, I could only shrug to hide my mild annoyance. "Planned Parenthood and the right to make my own decisions about my own body," was my response, as I stood surrounded by women from rural Alaskan towns, lobbying on behalf of Planned Parenthood.

Thanks to the latest election cycle and the rise of President Donald Trump, most of us have heard about the plight of the forgotten "rural voter," people who supposedly swung the election in Trump's favor in part because his policy reflected their views. However, it was rural Alaskan women who traveled upwards of 3,364 miles to their nation's capitol that day, to give a voice to a forgotten demographic that relies on Planned Parenthood and the services they provide.

I take pride in being from a small Alaskan town, which had an estimated 35,000 people calling it home when I graduated from high school in 2005. It was only a 22 minute drive to the "metropolis" that is Anchorage, Alaska, though, so while I grew up surrounded by mountains with bears and moose in our front yard, I also grew up with what can only be considered "big city" amenities. Contrary to what an episode of Alaskan Bush People would lead you to believe, growing up in Eagle River, Alaska wasn't all that different from growing up in any average middle-American town — a point made abundantly clear when it came time for me to experience my first Pap smear. I went to the nearby Planned Parenthood (one of four in the entire state) and was easily able to access routine medical care performed by a kind, honest, and trustworthy professional.

But not every Alaskan woman's experience is like mine. I learned the true importance of the vital organization when I met five other Alaskan women in Washington, D.C., who were there to meet with state representatives, share their stories and highlight why we must listen to the voices of rural women who rely on the services Planned Parenthood provides. We can't afford to ignore them — not when the current administration has promised to defund Planned Parenthood (unless they stop providing abortion care). Not when the "defunding" means millions of people who rely on Medicaid for their health care can no longer turn to an organization that provided 2.5 million patients with 4 million STD tests and treatments, 360,000 breast exams, 270,000 pap smears, and 2 million people with birth control in 2014, alone.

Planned Parenthood allows their doctors to perform telemedicine with patients in rural areas, who cannot access hub communities or larger cities. While nurses are present at those facilities, a registered OB-GYN can "call in" and discuss tests results and treatments with patients, with no additional cost to them. This allows Planned Parenthood to reach a larger group of rural and socioeconomically disadvantaged patients. Over 700 Alaskans have downloaded Planned Parenthood's birth control app, which allows patients across the state to access affordable birth control, regardless of where they live.

Reaching as many people as possible is incredibly important in a state that leads the nation in chlamydia rates, and is fifth in gonorrhea; a state that has has a child sexual assault rate six times higher than the national average, and a rate of reported rape is the highest in the country. These services are not only vital, but paramount to the women who live in notoriously under-served communities. In Alaska, 75 percent of Planned Parenthood's health centers are in medically underserved communities. Defunding this vital organization won't honor the beliefs of rural voters — instead, it will ignore the needs of the rural woman, the rural voter, and the rural voice that this current administration claims to champion and fight for.

Walking to Alaska Senator Lisa Murkowski's office in Washington, D.C., I knew every fact mentioned above. As a woman who has relied on Planned Parenthood not only in my home state of Alaska, but in Washington State and New York State as well, I can regurgitate statistics like it's my job. I was prepared to ask the Senator, who has announced that she will not vote to defund Planned Parenthood, to continue to fight for an organization that serves such rural communities. But instead, I listened to the stories of five rural Alaskan women, who were the embodiment of not only the unique needs of rustic communities, but also the collective voice of a group that will not apologize for where they're from, who they are, and what they deserve as human beings.

These women — who represent a rural demographic that largely goes unnoticed, especially in a state like Alaska — are proof positive that defunding Planned Parenthood is telling rural women (and men) that their needs don't matter, their health care doesn't matter, and their voices do not matter. In short, that they don't matter.

"In Alaska, we have the worst sexual health and reproductive health education in the nation. I was never given a comprehensive sexual education, and I was sexually assaulted when I was 15. This impacted me greatly, and I didn't know how to talk to anyone about it. I was able to walk to Planned Parenthood in Soldotna, and I told them what happened to me. Not only did I receive the services that they provide, but I had five women who had my back. Their support impacted me, and I regained my sexuality and my confidence, my body and my reproductive health.

"I am really pushing for a movement in Alaska to have sexual education in schools. When I first started, I felt a lot of backlash, and people would say, 'I can't believe you became this or that you would do this.' People even called my dad and said that we needed a 'family intervention' and I lost a lot of old connections with friends and family members. However, it's people who don't have a lot of experience with Planned Parenthood, who don't need it, that don't understand what's at stake. I have a nine-year-old sister, and our sexual assault rate is unacceptable. Instead of accepting those statistics, I am working to change them not only for my sister but for my future children. Planned Parenthood is working for the same, and I know that no matter where I go, they're always there for me."

"I went to high school in a very conservative town. My dad used a lot of anti-woman rhetoric. We had abstinence-only sexual education, and there's a huge stigma against women who control their own lives and their own bodies. It all really frustrated me and upset me. When I was in college, I knew I couldn't allow anti-woman rhetoric to impact me. I saw a Planned Parenthood table at a local conference and said I would sign up to volunteer.

"Now I am a leader in a lot of volunteer efforts in the Fairbanks community. You don't abandon your home.

"In 2012, I tried getting care at a public health care center in Juneau, Alaska. This was pre-ObamaCare, and I didn't have health insurance. They told me they couldn't take me unless I was an urgent case, and didn't have the time or resources to treat me. I then went to the local Planned Parenthood and they scheduled and saw me right away — in fact, that very same day.

And the meetings only continued. While these rural Alaskan women continued to share their stories, the care Planned Parenthood provides rural communities only became more and more obvious. As Murkowski listened intently, asking questions and offering informed comments, the rural women's words hung in the air each time they spoke:

"If we don't teach our future leaders how to take care of themselves, how can we expect to have healthy communities?"

"Planned Parenthood is a haven in our community."

"If I can't fight for my community, I don't know what the hell I can fight for."

"I'll be honest, I am worried about how we're going to get through this congress."

I wish I could write that watching my fellow Alaskans champion their rights to reproductive health services was simply inspiring. Of course, it was just that — but it was also unnerving. Here were women who come from unique backgrounds, who live in one of the most unbelievably beautiful, rustic, distinct places in the world — and they have to defend their right to care because of where they live.

We might not know how we're going to get through this congress, but I do know that the voices of rural women, from my home state and so many others, will be on the front lines. We will not go back.

More like this
Your Daily Horoscope For August 12, 2022
By Mecca Woods
25 Things I've Reduced My Life To, In Addition To WFH In My PJs
By Ginny Hogan
The Spiritual Meaning Of The August 2022 New Moon
By Nina Kahn
How To Change Your Twitter Handle
By Emma Carey
Get Even More From Bustle — Sign Up For The Newsletter