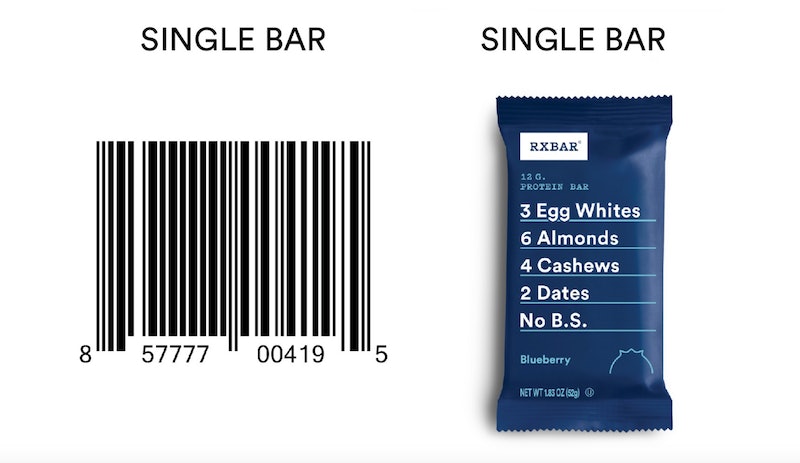 If you're a fan of the RXBAR, with its distinctive packaging listing all of the ingredients and portions of them on the outside of the label, you may want to take note: RXBAR issued a voluntary recall of its bars due to the "potential for the presence of undeclared peanut," per a press release and an email the company sent to customers on Jan. 16. This recent recall is an expansion of a prior recall in December 2018, which included Chocolate Sea Salt and Coconut Chocolate RXBARs, also recalled for potential peanut contamination. Per RXBAR, the company is now expanding the recall out of an "abundance of caution".

Each of these affected flavors has a separate window for its sell-by dates that are affected by the recall, which RXBAR published in a press release; it also includes the UPC and full descriptions of each product for clarification.

In an email to customers, the brand also noted that potentially affected bars were also sold in the Variety/Sample Pack, KIDS Variety Pack, The Chocolate Pack, Chocolate Duo Pack, Your Top Three Pack, Best Seller Pack, The Anything But Peanuts Pack and Whole30 Pack.

RXBAR iterates that the product is safe to eat if for customers who don't have any sensitivity to peanut products. The company says that people who have purchased the affected products who have peanut allergies should discard it immediately, and that they are able to contact the local retailer they purchased the product from or contact RXBAR directly for a full refund; customers can contact info@rxbar.com or 1-312-624-8200 Monday through Friday, 8:30am CT - 6pm CT and Saturday and Sunday 10am CT - 1pm CT, per the company's email.

More like this
Starbucks Released New Menu Items For The Summer
By Emma Garza
A Beginner's Guide To Drinking Whiskey
By Alexis Morillo
How To Make The Watermelon, Feta, & Mint Salad Trending On TikTok
By Emma Garza
Here’s How To Get High-End Wines At A Discount
By Anna Anderson
Get Even More From Bustle — Sign Up For The Newsletter