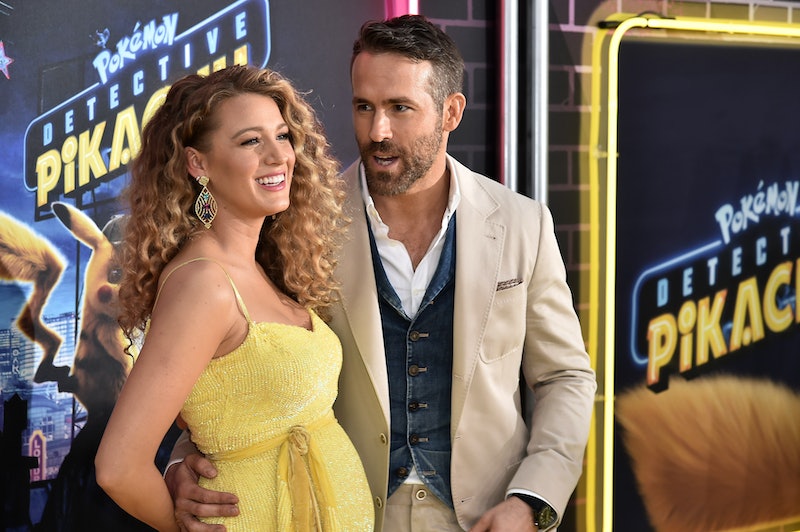 Take your child to work day came a little early for Ryan Reynolds and Blake Lively's soon-to-be third kid. Recently, Reynolds shared a photo of Lively visiting him on the set of his upcoming movie, Free Guy. Reynolds posted the adorable pic on his Instagram Stories Saturday, June 22.

Lively revealed her pregnancy with the couple's third child during the May 2 premiere of Reynolds' movie Detective Pikachu. After walking the red carpet in a sequined yellow dress, she posted a series of photos from the evening on Instagram with the caption, "PokeMOM.... Out now." In the photo from Lively's set visit, the couple can be seen hugging in front of what appears to be a City Hall, with a camera in the background. Lively wears a short-sleeved dress and sneakers, while Reynolds wears a navy blue shirt and jeans.

The Deadpool star captioned the snap, "Great Scott!," referencing the classic Back to the Future movies. Lively's baby bump can be seen in the photo, which, per People, was taken in Boston, where the movie is being filmed. Earlier that day, Reynolds posted another update from the movie, which is expected to be released summer 2020. He captioned a photo of himself and two of his co-stars in front of the Boston Flower Exchange, "First day working with Joe Keery and Utkarsh Ambudkar. My arms feel so safe, draped loosely across their powerful shoulders. @uncle_jezzy @utktheinc #FreeGuy (special cameo by Thelma the dog)."

Reynolds and Lively often show off their support for each other's careers. In August 2018, Reynolds posted a photo of himself after watching A Simple Favor, while Lively often accompanies her husband to events for his Aviation Gin brand. When the fan-favorite celeb couple isn't showcasing their love on red carpets or teasing each other via Instagram comments, Lively and Reynolds are celebrating their sweet family.

However busy both actors are, fans should probably expect more adorable bump photos of Lively in the future. In 2012, the Gossip Girl star told Allure that her and Reynolds were planning for an expansive brood. "I've always wanted a big family," she told the mag, adding that she'd have "30" kids if she could.

But having a large family does come with some challenges. Reynolds is known for his comedic tweets on parenting, in 2017, he even opened up about the hilarious hurdles of flying with young children to GMA. He said, "I would rather drink a piping hot bowl of liquid rabies than get on a plane with my two children."

Sweet photos like the one of Lively visiting Reynolds on set, in addition to their real world parenting struggles, reminds the world why they're one of Hollywood's best celebrity couples.