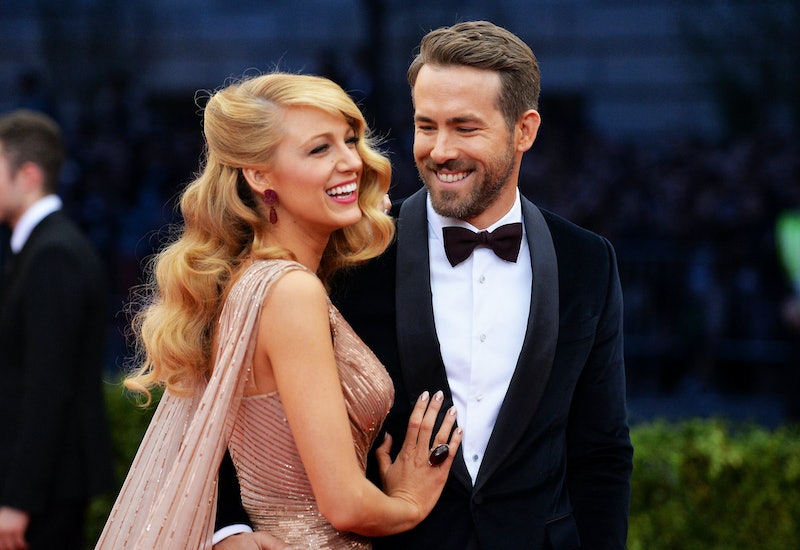 If somehow you're not aware, Blake Lively and Ryan Reynolds love to troll each other. They are one of the best celebrity couples around, and the proof is in how much they joke with each other on social media. Whether they're making fun of one another on their birthdays, while they're promoting a new movie, or just for pure fun, the actors definitely aren't afraid to take jabs — and on a public platform for the world to see. With that, why not make a list of Lively and Reynolds' best trolling comments?

Of course, the following remarks aren't meant to be taken seriously. Lively and Reynolds love each other immensely. As the Deadpool star said during his Hollywood Walk of Fame ceremony in December 2016, "I want to thank my wife, Blake, who is sitting right there, who is everything to me. You are the best thing that has ever happened to me. You make everything better. You make everything in my life better. You've given me two of the most incredible children I've ever hoped to have."

As for Lively, she wrote the following on Instagram alongside a photo of Reynolds' star, "Proud is a pitiful word to describe how I felt today. @vancityreynolds The permanence of your impact is undeniable ...Always has been, but now we have a fancy [star emoji] to show for it."

See? They can also say really sweet words about each other, but the trolling is just another way they show love and how much fun they have together. If you can't troll your spouse, what's the point? And with that, here are 11 times the A Simple Favor actor and Reynolds flawlessly trolled each other.

On June 8, Reynolds shared a video on Instagram having a conversation with his "twin brother," Gordon. He captioned the post, "Today is #NationalBestFriendsDay. Tomorrow is #WorldGinDay. My brother is an ass. Which is why you can’t have one without the other." For those who recall, Gordon first became known in 2016, when Reynolds filmed an interview with GQ as the made-up character.

Of course, Lively replied perfectly. She commented, "Sh*t. Your brother is hot. I've made a terrible mistake..." Reynolds didn't let it go and answered her, "You haven't made a mistake. You've been living with him for over a year."

They really are the greatest couple.

In September 2018, Reynolds shared an Instagram featuring an ad for Aviation Gin, his company, on a truck, which also just happened to feature a big picture of himself. He captioned it, "Turns out the driver really doesn’t carry cash. But he DOES carry pepper spray... and a sh*tload of @aviationgin #Aviationowner."

Yeah, Lively didn't ignore her husband's post. She hilariously commented, "Who needs a mini van?! I'm driving this from now on. Subtle, gorgeous, and OHMYGAWDYOUREHUGE."

They both always have the loveliest birthday posts. First, in August 2017, Reynolds posted a photo on Instagram cropping out Lively's face and wrote, "Happy Birthday to my amazing wife."

Don't worry, Lively got her revenge in October 2017 by sharing an Instagram of Ryan Gosling and cropping out Reynolds face. She captioned it, "Happy Birthday, baby."

Reynolds responded to her birthday message by commenting, "Awesome."

He's right, it really is awesome.

As part of a promotion for her 2019 film A Simple Favor costarring Anna Kendrick and Henry Golding, Lively posted the following photo and caption, "My turn..."

Oh, you bet Reynolds responded. He wrote, "He seems nice."

As creative as she is with her captions and photos, the former Sisterhood of the Traveling Pants actor is even more crafty with her hashtags, especially when it comes to her husband's films, like Deadpool. Basically, this whole creation Lively shared in March 2015 on Instagram is top notch.

She wrote, "Now for this week's WHO WORE IT BETTER... Reynolds vs Reynolds I vote for a reshoot: wearing only the mask. #Deadpool #RyanReynoldsRocksMySocks #CanSomeonePleaseGiveThatBearABreak." She really is the queen at trolling Reynolds.

As Lively posted on Instagram in April 2015 about Reynolds walking the red carpet with Dame Helen Mirren at the Berlin International Film Festival for their movie Woman in Gold, "Should I be concerned that my husband's never looked at me this way?..." Oh, she didn't stop there, but also, once again, dominated with her hashtags, which were: "#WhereAreThoseEyesWanderingReynolds" and "#HelenMirrenIStheSexiestWomanAlive." Perfection.

While promoting Deadpool 2 in May 2018, not only did Lively share cute photos with Reynolds on Instagram, but she crafted this hilarious caption: "Round 2 with this guy? Yes. Yes please. 😉 #deadpool2 I’ve seen it 3 times THIS WEEK ...the movie, that is."

And, yes, Reynolds had a response for his wife's caption. He wrote, "If someone accidentally teaches our daughters to read someday, they might see this. Get it together."

In November 2017, Reynolds had no shame whatsoever in posting a photo of Lively on the set of her upcoming film The Rhythm Section. In character mode, where Lively is dressed way under compared to her real-life self, Reynolds commented, "#nofilter." Oh, snap.

And, yes, Lively responded. She quipped, "Only the best for SMA 2010." Most likely, "SMA" refers to Reynolds' People's Sexiest Man Alive title he earned nine years ago.

Let's just say Reynolds isn't the best at making Christmas cookies — and Lively once wanted everyone to know. Next to a December 2017 Instagram showing some really poorly made holiday cookies, she wrote, "@vancityreynolds made some Christmas cookies... 😳...He’s verrry handsome though." Ha!

Reynolds didn't seem to mind her slam, as he got in on the fun and commented, "I wanted to be the first person to bake Christmas cookies using only a hammer."

They both definitely take the trolling really well.

In February, Reynolds posted an Instagram of himself with his empty hands placed as if he was texting and captioned it, "Ten minutes in to writing an email to my mom, when I realized there was no phone in my hand."

You bet Lively responded with a witty remark. She came up with the perfect caption and commented as if she were Reynolds, "Why won't this damn app swipe right?!?!!" He replied, "Because it's the E-Harmony app."

Don't worry, the former Gossip Girl actor came back with the best zinger. She wrote, "@vancityrenolds [poop emoji] can you show me how to download that? Ever since Ashely Madison closed I've been so lonely."

In a tweet about Lively's 2018 movie A Simple Favor, Reynolds tried to get spoilers from his wife, but, she wasn't having it. Her response? "Oh darling, of all the secrets I’m keeping from you, this should be the LEAST of your concerns... trust me." Mic drop.

And there you have it. How can you not adore them as a couple? Lively and Reynolds are truly fantastic and keep making the world a better place one trolling comment at a time.