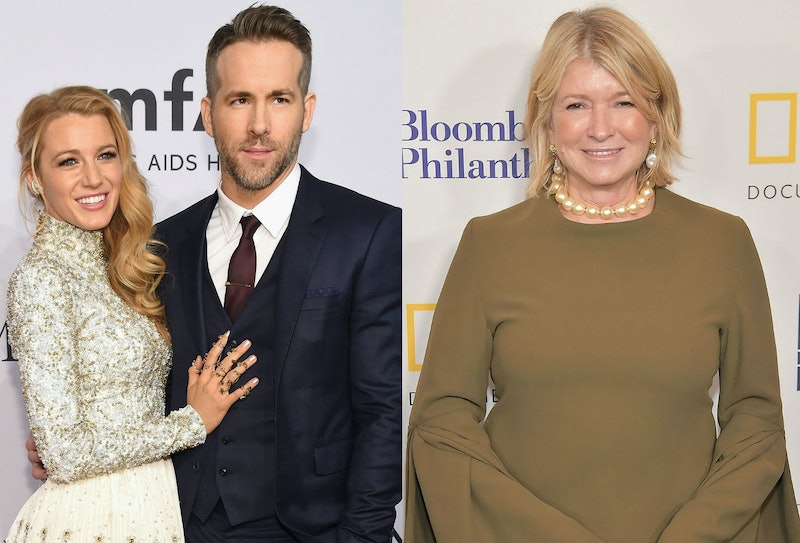 Decorating for Christmas is serious business, just ask Ryan Reynolds, who wants to have a Christmas decorating contest with Blake Lively and their neighbor, Martha Stewart. Can you imagine them competing when it comes to holiday decorations? Not only would it be an amazing competition, but the trees, lights, ornaments, wreaths, garland, and every other Christmas decoration on the inside and outside of their homes would look like something straight out of a catalog.

While appearing on The Ellen DeGeneres Show on Tuesday, Ellen DeGeneres brought up how Reynolds and Lively must have some stiff competition when it comes to decorating for Christmas, since, you know, the queen of home design lives by them in New York.

"I heard that you're neighbors with Martha Stewart, that's right?" the daytime talk show host asked Reynolds, who confirmed, "Yeah, we are."

DeGeneres then said, "OK, so for Christmas, how do you compete with something like that? Because she must decorate — do you decorate?" The Deadpool star replied with such a Reynolds-joke. He said,

"No, I don't at all. I would never even try to do that. If I decorated, the whole house would just be like, I don't know, old spit or something. I have none of that sensibility, but my wife, Blake, is amazing at it."

To that, DeGeneres responded, "You certainly don't know how to decorate if you'd use spit."

Reynolds answered, "Clearly." He then said about possibly holding some type of Christmas decorating contest with himself and Lively against Stewart, "I hope to someday create a competition at some point."

Who else agrees they need to do this next holiday season? Let's hope neither of them move before then, because a friendly neighbor decorating competition would be the best Christmas present ever for fans.

Thankfully Reynolds has Lively by his side to make their home festive for the holidays — and to help him compete against Stewart. If you don't recall, he even has trouble making Christmas cookies, as the former Gossip Girl star pointed out on Instagram last December. She wrote next to some unfortunate-looking cookies,

First of all, they can't help but troll each other. Secondly, yeah, Reynolds is definitely going to need Lively's help if they have any hope in winning a potential future decorating contest with Stewart.

As you can probably imagine, Stewart goes above and beyond decorating for Christmas. During Monday's Ellen DeGeneres Show, Stewart confessed to DeGeneres about her Christmas trees, "Oh, last year I had too many. I had about 40, because I put at least five trees in every room." She then said about decorating for this year, "We started yesterday putting more trees this year." She takes it seriously.

Who do you think would win a Christmas decorating contest between Lively and Reynolds and Stewart? It's hard to say, because both Lively and Stewart have great taste. As long as Reynolds' doesn't use any "old spit," he and Lively would definitely have a chance at beating Stewart. Now, let's just keep those fingers crossed that this competition actually happens.

More like this
Amanda Seyfried Says She Felt Pressured To Shoot Nude Scenes At 19 Years Old
By Jake Viswanath
Everything To Know About 'RHONJ' Season 13
By Brad Witter and Jake Viswanath
Armie Hammer's Exes Share His Alleged Voice Messages About Cannibalism & Abuse
By Grace Wehniainen
Lauv Is No Stranger To Taylor Swift, Drake, Ed Sheeran, & Fame
By Alyssa Lapid
Get Even More From Bustle — Sign Up For The Newsletter