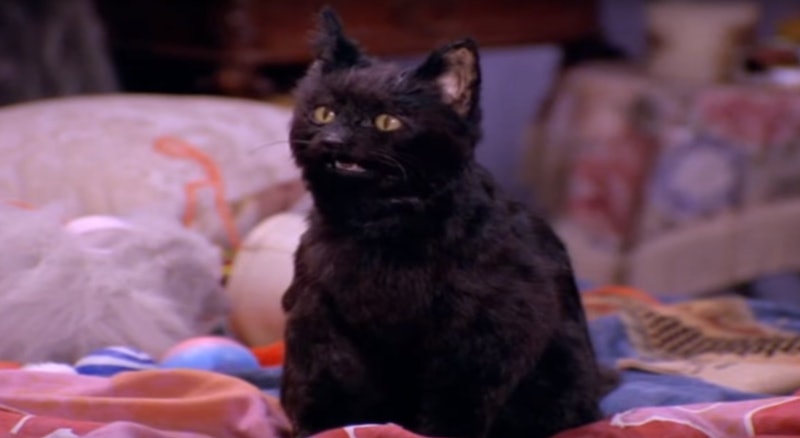 As the sassiest ball of fur on four legs, Salem was arguably the best character of the '90s live-action iteration of Sabrina The Teenage Witch. Actually, he was probably the best character of the '90s, period. But the new Salem from the Sabrina reboot has been revealed, and as you might have been expecting from Roberto Aguirre-Sacasa's modern take on the Archie Comics story, the cat is looking pretty edgy.

Aguirre-Sacasa introduced the new Salem to fans over Twitter with a picture captioned, "Ladies and gentlemen, meet #Greendale's latest resident. All hail, Salem!" The image in question shows an extremely elegant-looking black cat sitting on a luxurious looking red, silk cushion surrounded by assorted witch paraphernalia. He looks spooky, stern, and sophisticated. Crucially, he appears to be a real cat, as opposed to the puppet used in the '90s TV show. Sincere apologies to anyone who thought the old Salem was a genuinely magical, talking cat — that revelation is a tough one to suffer.

The new Sabrina series, which is currently untitled, isn't a reboot of the beloved '90s show starring Melissa Joan Hart, but rather an adaptation of Aguirre-Sacasa's Archie Comics series The Chilling Adventures of Sabrina. It's believed the show may act as a companion piece to Riverdale, which Aguirre-Sacasa also created and remains the showrunner of. Suffice to say, the new Sabrina series stands a good chance of becoming just as popular as the hit CW show, and just as dark as its source material.

In January, it was announced that the show, which has a two-season deal with Netflix, had perfectly cast Mad Men's Kiernan Shipka as Sabrina. On Monday, it was further announced Jaz Sinclair will play Sabrina's best friend, Rosalind Walker, with the character described by The Hollywood Reporter as being the "brash, empowered, and outspoken daughter of Greendale's minister." As Teen Vogue noted, there's a high chance the witch and the church could clash in the show, which is some added drama worth tuning in for.

When the series was announced, Entertainment Weekly described it as, "tonally in the vein of Rosemary’s Baby and The Exorcist, this adaptation finds Sabrina wrestling to reconcile her dual nature — half-witch, half-mortal — while standing against the evil forces that threaten her, her family and the daylight world humans inhabit." All of that sounds so good that someone needs to cast a spell on production, so we can stream the show now.

The new Salem may seem like a small reveal, but there's actually a lot you can learn about the show from just this one picture. While Salem himself is looking far more serious and debonair than the one fans came to know in the '90s, the props also look ornate, ancient, and luxurious. Clearly there's some serious witchcraft happening in that room, but there's still a modicum of glamour being maintained.

Then, there's the candle. Not only is it casting an eerie glow across the room, which suggests that this could be a spell with dark implications, but it's also a red candle. In traditional witchcraft, a red candle is often used for spells or rituals which call for or require strength. Sometimes that can be in regards to inner-strength, like the sort of empowerment that a teenage girl like Sabrina would no doubt be seeking. But in other times, it can be used to augment power against enemies. Either way, Sabrina could be messing with some major forces.

Fans of the original show might be a little sad to see the old, sardonic Salem traded in for a more sophisticated model, but the swap looks to be worthwhile. From this one picture alone, the new Sabrina series looks as though it may be as spooky, magical, and mighty as the comics they're based on. And even old, sassy Salem would have approved of that.

More like this
The 'Kenan & Kel' Reunion On 'SNL' Took A Dramatic Turn, Thanks To Keke Palmer
By Brad Witter
The First Trailer For 'That '90s Show' Includes So Many Nods To The Original Series
By Jack Irvin, Alyssa Lapid and Grace Wehniainen
This 'Derry Girls' Reunion Has Delighted Sister Michael Fans
By El Hunt
'SAS Rogue Heroes' Season 2 Is Set To Be An Explosive Watch
By Sophie McEvoy
Get Even More From Bustle — Sign Up For The Newsletter