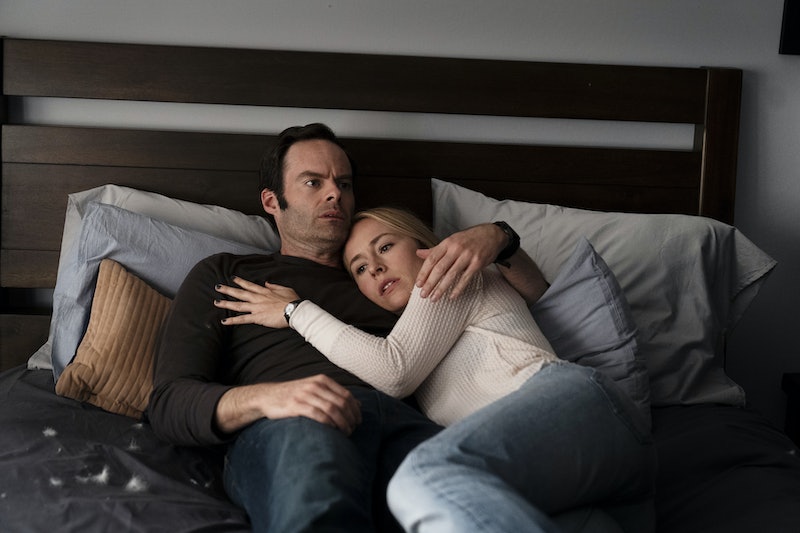 Throughout this week's episode of Barry, Sally prepares a piece for her acting class that centers around the night she left her abusive ex-husband. And then, in an unexpected twist, he actually shows up to find her just before credits roll. Sally's ex-husband on Barry won't just drag up her past trauma, but he'll also test whether Barry himself — who's present when the ex arrives — will be able to truly keep a lid on his violent tendencies.

Viewers don't know a ton about Sally's relationship with her ex-husband, Sam, except that he physically assaulted her, seemingly on more than one occasion. On the night she left, she explains in this episode, he had choked her and left welts on her neck after becoming enraged that she'd been out dancing with her friends. Barry is obviously troubled by the violence in his girlfriend's past, and we've seen before that he's made a conscious effort to temper his own violence to be a better man for Sally.

Now that he's face to face with the man who's caused her so much pain, Barry will be faced with a huge challenge. Barry doesn't seem to relish in violence — he wants out of the hit man career, and has desperately been trying to escape. But as his wartime flashbacks have shown, there have been times when hurting people and killing hasn't been difficult for him.

Of course, we don't know what Sam wants just yet. Hopefully, he won't stick around for too long. If he just wants to talk to Sally and get some kind of closure, or offer some attempt at an apology, I could see Barry standing by her side as it happens, seething but nonviolent. But if Sam gets angry with her, and revisits the abuse he's apparently capable of, it's easy to imagine Barry would snap to defend his girlfriend.

If Barry loses his temper in a major way in front of Sally, it could definitely spell disaster for their relationship, unless he's literally leaping in between them to prevent Sam from hurting her. She's been very clear in the past that she'll never be with another violent man, and it seems like she'd be troubled by that violence even if it was directed at a man she presumably hates.

Sam also isn't just some mobster crony who Barry could theoretically kill and then easily walk away from for good. It's easy to imagine that Barry could get Sam alone if he wanted to, and exact some kind of revenge on Sally's behalf. But Sam is someone who Sally knows intimately — she'd notice his death, and there have already been far too many murders involving people close to Barry's circle. It'd draw suspicion from many different directions, and maybe even from Sally herself.

Hopefully, there won't be any violence resulting from Sam's arrival. He's obviously a terrible person, and should leave Sally alone. But he's not worth Barry blowing his cover, or losing another piece of his own humanity just so he could hurt Sam. If all goes well, Sam's presence could prove to all of us — and to Barry himself — that he has the wherewithal to keep his cool when it matters most.