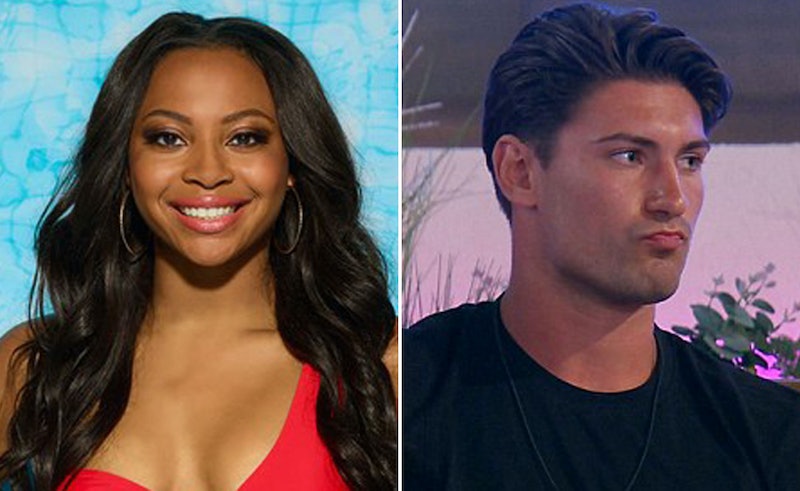 It's official, Love Island's Samira Mighty and Frankie Foster are girlfriend and boyfriend. During Sunday night's episode of After Sun, he asked her to couple up with him IRL, in front of Caroline Flack and a live studio audience — and she said yes. Personally, I thought the moment was cute AF, however, after checking out Twitter, it seems quite a lot of people disagree. Big time. So I decided to consult an expert about Samira and Frankie's body language. Are these two actually into each other or not?

Doctor Jack Brown is a body language and emotional intelligence expert. I sent him the clip of the moment Frankie asked Samira to be his girlfriend to see if there were any telltale signs that we needed to know about and it turns out, there are a worrying number of red flags.

For starters, if you watch the clip below, you'll notice that after Caroline tells Samira that Frankie has a question to ask her, he touches his nose. Dr. Brown tells me, "When this is performed in sequence like this, it's highly suggestive of deception on his part."

But apparently, Samira's not that into Frankie either.

While waiting to hear his question, she touches her nose too, but with both hands, separately. She then covers her mouth. Dr. Brown says this is also "strongly suggestive of deception on Samira's part." The former Islander then looks down to the right, which, Dr. Brown says "in this context, is suggestive of guilt and/or deception."

Of course, there is a chance that both Samira and Frankie were just really nervous and not relaxed enough to completely be themselves. I mean, sure, they've been in front of the cameras 24/7 in the villa, but not with a live studio audience present; that's got to be scary. However, Dr. Brown wasn't finished there.

In the moment Frankie actually asks Samira to be his girlfriend, she noticeably has her legs crossed away from him. Dr. Brown explains that this is a "distancing display," so not the best indicator that this is going to be a blossoming romance, eh? "Her fingers are interlocked as well — and straightened — indicating anxiety. And it's strongly suggestive of critical evaluation and frustration."

But let's not jump to conclusions here. There must be something between these two or else they wouldn't have become boyfriend and girlfriend, surely?

Well, according to Dr. Brown, Frankie's body language and verbal language contradict each other in the moment he asks Samira "will you be my girlfriend?" At this precise second, Frankie withdraws his right arm, which was previously resting behind her shoulders. Dr. Brown tells me this shows "disparity with Frankie's verbal language."

But what about the kiss? After the couple became official, they smooched live on TV, much to the delight of the live studio audience. That's got to count for something, right? Right? Unfortunately, Dr. Brown doesn't think fans should get too excited over that just yet, noting that Samira maintains her legs crossed away Frankie "as well as her torso perpendicular to him" when they locked lips. "This has a very low affection coefficient," he explains. "If ever you're on the receiving end (for example, in Frankie's shoes) of a kiss like this, it's a very strong indicator that they're just not into you."

But again, could the pair have been nervous to kiss in front of a live studio audience? It must have been pretty scary to ask Samira to make things official. What if she said no?

Well, by the looks of things, the Internet is pretty divided:

Does this mean the couple probably won't be planning a wedding à la Olivia Buckland and Alex Bowen this time next year? Based on this display, Dr. Brown doesn't think so. "I have no idea what their history is or if, at one time, they felt affection for each other," he says. "However, at this time, they are not into each other. And they are not faking or acting very well."

Whether Dr. Brown's evaluation turns out to be correct or not, it's safe to say I'll be watching this space like a hawk. And if Samira and Frankie aren't destined for a happily ever after, I hope they can at least remain BFFs. Team Samira all the way.